The Sweet Smell of Milkshakes and Oil 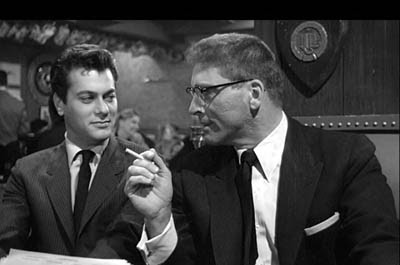 How much is a man’s soul worth? That’s undoubtedly a question that has no set answer. It depends very much on the soul, I would guess. It’s a question that is asked in both of these films, and both of them essentially have the same answer: The value of a man’s soul is far more than he is willing to take for it. The soul always goes for a discount price, or so these films would have us believe.

Sweet Smell of Success is about the give and take between two men who will do anything to get what they want. The first, J.J. Hunsecker (Burt Lancaster), is a powerful man in the world of show business. He is the quintessential late 1950s gossip columnist, and his column gives him incredible power. Getting a positive mention in Hunsecker’s column is the equivalent of rave reviews from every critic in the land. He claims a readership of 60 million, and he can deliver the goods.

Sidney Falco (Tony Curtis) is a press agent who finds himself perpetually in Hunsecker’s hip pocket. What J.J. needs, Sidney does, because of the power wielded by Hunsecker. If Sidney wants his clients to get a mention—and he does—he has to do the dirty work that J.J. gives him.

The current load of dirty laundry concerns Susan Hunsecker (Susan Harrison), J.J.’s kid sister. It seems that she has become enamored of Steve Dallas (Martin Milner), a local jazz musician with the Chico Hamilton Quintet (played by themselves, with the addition of the very clean-cut, vaguely out of place Milner). A guy who plays the six-string in local watering holes is never going to be good enough for J.J. Hunsecker’s sister, so Sidney’s job is to break the two up. Unfortunately for Sidney, Steve Dallas got all of the integrity that Sidney didn’t.

And Sidney is a louse, a pure unadulterated bastard of the first degree. To get the ball rolling on splitting up Susie and Steve, he bribes another columnist with a story about Steve Dallas being in with the Commies, and having a significant marijuana habit, both untrue. To get this done, Sidney fixes up the columnist in question with his girlfriend Rita (Barbara Nichols) for a little nighttime fun. She objects, but goes along with it anyway, in a scene that almost contains the sound of the poor girl’s soul dying.

Eventually, Susie and Steve go their separate ways, but J.J. isn’t satisfied. It’s not enough that Steve Dallas has been pushed away. For Hunsecker, the only thing that remains is to destroy Steve Dallas completely, another task that he gives Sidney. Sidney doesn’t want to do it, but has the carrot of Hunsecker’s column dangled in front of him, and once again, the spectral cash register rings up another sale.

Throughout this film, the overwhelming emotion is not love or desire, but loathing. Hunsecker loathes everyone who isn’t himself or his sister. He badmouths Sidney even while Sidney is lighting the man’s cigarette. Sidney loathes everyone, including himself. Susan learns to treat the world with her own brand of contempt by the end. Everyone seems to be just on the edge of hitting someone else.

Burt Lancaster is truly awe inspiring as Hunsecker. This is a man who will stop at nothing to get what he wants, no matter the cost. He is willing to bring as much power as he can to bear at any time to achieve his goals. With his severe glasses and more severe haircut, he presents himself as a man who cannot be taken lightly. Tony Curtis has never been oilier or more despicable. 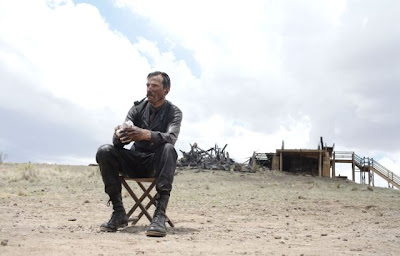 There Will Be Blood stars Daniel Day-Lewis as Daniel Plainview, a silver miner-turned oilman when his old mine plays out and starts gushing the black stuff one day. In the early days of the 20th century, Plainview wildcats around the southwest, looking for likely places to drill and hitting strikes to fund his continued operations. On his first well, a man is killed in a freak accident, and Plainview adopts his now-orphaned son, christening the boy H.W. (played as a pre-teen through most of the film by Dillon Freasier). While hardly in the ranks of Standard Oil and other major players, Plainview is successful and wealthy, and would like to keep things that way.

One day, he is met by a young man named Paul Sunday (Paul Dano, who also plays Eli Sunday). For a cash payment, Paul tells Plainview about the town of Little Boston, where the oil bubbles to the surface. Plainview and H.W. go and scout the area, buying up land from the people there, and building a derrick to bring the oil to the surface. However, Plainview specifically snubs Eli Sunday when it comes to blessing the well, and two important events occur. One man is killed, which sets things back a bit. More significant is that the well erupts, exploding and catching fire. The blast also permanently deafens H.W.

Around the time H.W. is sent away to learn from a teacher specialized in the hearing impaired, Henry Plainview (Kevin J. O’Connor) arrives. He claims to be Daniel’s half-brother, and is at the end of a string of bad luck. Daniel takes him in, and essentially confesses everything to him—he hates the bulk of humanity. However, Henry is willing to work for him, and take what he can get, and he essentially replaces H.W. in Daniel’s world.

Daniel Plainview, like J.J. Hunsecker and Sidney Falco, knows what he wants, and he’s willing to do anything to get it. Anything that deviates from his worldview becomes something that should be destroyed. It’s difficult to ask the price of Plainview’s soul, because as the film continues, it becomes more and more evident that he never really had one to begin with. All he ever really had was an oil derrick for a heart. Even when he is on top, he can’t help but grind those he dislikes into the ground—and he dislikes everyone, especially Eli Sunday. He and Hunsecker are two versions of the same person.

Of the two films, I prefer Sweet Smell of Success. I like the story better and I appreciate the characters more. This isn’t to detract from the latter film. The more I watch Daniel Day-Lewis, the more I think he may be the best actor working today. He is always memorable and always riveting. I’m also happy to see a quality role for Kevin J. O’Connor, who is far more talented than many of the roles he gets. He’s badly underrated, and I’d like to see him work more in good films like this one.

However, There Will Be Blood concerns the soul of a man who is far more successful than most of us will ever be. Of course he’s a bastard, and he’s easy to dislike. There’s a pleasure in seeing the characters in this film get what they deserve. In Sweet Smell of Success, there is a continual feeling, at least for me, that something better has to happen to some of these people. There are innocent victims like Susie and Steve who deserve better. In short, there was something more for me to cling to there. There was, if nothing else, hope.

Why to watch Sweet Smell of Success: Two of the greatest sons of bitches to ooze across the screen.
Why not to watch: Martin Milner as a jazz musician?

Why to watch There Will Be Blood: Daniel Day-Lewis is that good.
Why not to watch: The DVD is pretty punishing—2:38:00 of film, and only 8 scenes.
Posted by SJHoneywell at 8:17 PM