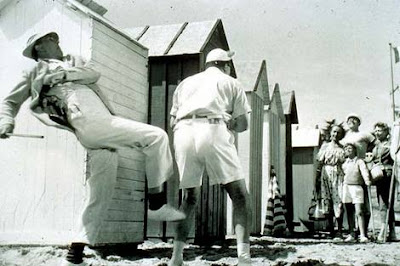 In any artistic endeavor, there are those people who, for whatever reason, have a small output of material—not good material, but material in general. Stanley Kubrick, for instance, directed fewer than a dozen and a half movies, although close to a dozen of them are bona fide classics. Tarkovsky directed only 11. They’re sort of like the cinematic equivalent of George Orwell, who wrote only six novels, but within those six novels, penned Animal Farm and 1984.

Jacques Tati is like that. One of the greatest French directors in history (and that’s saying a lot) and certainly one of the greatest comedy directors of all time, Tati directed a mere nine films, including his incomplete final film. And yet, virtually every one of his films is a clinic on how to do comedy. In almost all of his films, Tati not only directs, but stars as the eccentric Monsieur Hulot, and never better than in Les Vacanses de Monsieur Hulot.

Hulot is a good natured and well-meaning man, but he is also a blundering lummox and a boob. With his pants pulled up to well above his navel, odd gait, and omnipresent pipe and hat, Hulot is unmistakable in any scene even if he is not the focus of that scene. Hulot always means well, but is incapable of doing anything without causing tremendous chaos around himself.

In this film, widely considered the greatest of the Hulot comedies, M. Hulot goes on a vacation to a seaside resort. Here he tries to fit in with the regular summer visitors, but is unable to either by his own complete lack of awareness for his own surroundings or freak chance events. That’s really all there is to it. Essentially the film is a series of comic events, situations, and people, a mostly plotless little film with a great repeating guitar and vibraphone soundtrack.

Tati’s film style is unlike anything else of its time, and unlike almost everything that came afterwards, although much of what Rowan Atkinson did with Mr. Bean appears to come as a direct answer to Tati’s character. Bean is, in many ways, a British answer to the French Hulot. Tati’s style relies on a few particular oddities virtually unique to him. Conversations are almost entirely muted and difficult to hear, and in many cases aren’t that important. Because of this, many of the comedic gags are played in mime, or virtual mime. On the other hand, sound effects, particularly those that are essential to the various slapstick gags that occur throughout the film.

Tati is a brilliant physical actor. His various escapades as Hulot are consistently funny, often in very subtle ways. While there are certainly some laugh-out-loud bits in this film, much of what happens or odd coincidences or silly happenings that would be passed over in any other film. Here, such minor comedic happenings are given as much scope as many of Tati’s grander jokes. Many of these jokes are little setpieces that have nothing to do with anything else in the film, but are charming enough that their remaining in the film is something of a testament to Tati’s ability to choose scenes wisely and well.

Hulot attempting to mount a horse is one perfect example of his skill behind the camera. In a typical comedy, we’d see a series of pratfalls of Hulot attempting to get on the horse and falling off—funny, but typical. Instead, we see the entire scene from a different point of view, only getting Hulot thrown into the frame now and again, leaving us to imagine what is going on behind the corner of the building.

In addition to being adroit with his camera, Tati is also very clever with how he constructs his narrative. Often the Hulot character is nowhere near the main action that is going on, but is standing in the background, doing something else, completely oblivious to everything else, but still creating chaos around him. By focusing the camera somewhere other than on himself, though, Tati is able to show odd little moments that are staggering. A woman picking up seashells and handing them to a companion, for instance, doesn’t notice him simply tossing the shells away while she isn’t looking. These little asides add to the overall appeal of this film, making what would otherwise be an entertaining film something far more special.

Jacques Tati was something truly special both on camera and behind the camera. It makes me wonder how much more he could have done if only he had managed to make more than his small handful of films. With Tati, though, you take what you can get, and Les Vacanses de Monsieur Hulot is worth at least two of almost any other comedy film ever made.

Why to watch Les Vacanses de Monsieur Hulot: A unique, light, and still funny comedy.
Why not to watch: That vibraphone song will get lodged in your melon for days.
Posted by SJHoneywell at 11:01 PM