The Plot is Secondary 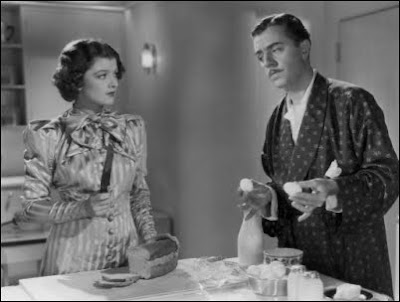 The 1930s were a vastly different era from the one we live in now. That’s hardly a shocking statement. One need only compare a great film from the first era with one from the modern to see the difference. When the film from the 30s is The Thin Man, the difference is in the dialogue. Witness Nick Charles (William Powell) explaining to bartenders how to properly shake his fourth or fifth martini of the night, because martinis should always be shaken to waltz time.

Things really liven up with the appearance of Nora Charles (Myrna Loy), Nick’s wife, who is as smart and verbally devastating as Nick. They sit down for a drink, and she asks him how many drinks he’s had. He answers that the one the waiter has just handed him is his sixth, and she asks the waiter for five more, lined up on the table in front of her.

On its surface, The Thin Man is a murder mystery. A scientist named Wynant has disappeared, although it’s not actually a consensus that he may not be in town. When a body connected to Wynant shows up, it becomes evident that Wynant may well be the killer. Then a second body and even a third turn up and Wynant looks even guiltier.

Things are additionally complicated by Wynant’s odd family. His ex-wife keeps a lover named Chris (Caesar Romero), and her son is odd in many ways including a morbid fixation on criminals and psychiatric complexes. Wynant’s daughter Dorothy (Maureen O’Sullivan) is hoping to marry, but won’t until she finds out where her father is and his guilt is either proven or disproven.

It’s a complicated plot with a lot of different characters moving in and out of the picture at a fairly constant rate. Many of the people who show up are suspects for one reason or another, and all of them have a motive for the various killings. Into this walk our heroes, Nick and Nora Charles. Nick is a former detective who hung up his gumshoes when Nora’s father died, leaving her a fortune. While he denies he’s taking the case, he eventually takes it simply because every assumes he is and gives him enough evidence that he can investigate on his own.

Since this is a 1930s film, you can assume from the outset that the case will be solved, the murderer will be captured, and Nick and Nora will survive to the end despite what happens to them. That’s the nature of the beast.

Anyway, all of this is secondary to the relationship between Nick and Nora. The film is all about their relationship, which is both delightfully romantic and sweet and falsely antagonistic. The two of them are absolutely devoted to each other no matter how much they may pretend that they aren’t. Therein lies the charm of this film. It’s all about the dialogue between these two more than it’s about any murder, let alone three of them.

Well, it’s about that and the prodigious drinking that the two of them partake in at an almost constant clip. Both Nick and Nora are almost constantly either boozed up or nursing a hangover. They go through more alcohol than a typical fraternity party, which again is part of the charm of the two of them.

In addition to the dialogue, what makes the film work is the very natural chemistry between William Powell and Myrna Loy. The two of them appear to really be a real couple who have an actual relationship. Their verbal bantering aside, they are truly playful with each other throughout the film in a way that is entirely endearing. They make the sort of couple that would be ridiculously fun, if tiring, to know in real life, both enraptured with each other and frustrated with each other. The film is wonderfully fun, and specifically because of the two of them. Oh, and I shouldn’t forget the presence of their wire-haired terrier Asta.

The chemistry here is more amazing because the film was directed by W.S. Van Dyke, better known as “One-Shot Woody.” Van Dyke allegedly created the film in a mere 12 days, and it doesn’t show. It’s also a little surprising at the level of raciness that was allowed to creep in to a film made in the 30s. When the police search their hotel room and start going through the bureau, Myrna Loy shouts, “What’s that man doing in my drawers?” William Powell performs a nearly flawless spit take in response.

One more example:
Nick: I’m a hero. I was shot twice in the Tribune.
Nora: I read where you were shot five times in the tabloids.
Nick: It’s not true. He didn’t come anywhere near my tabloids.

They just don’t write dialogue like this anymore. Such a pity.

Why to watch The Thin Man: Smart dialogue and…well, smart dialogue.
Why not to watch: A complicated plot that is still secondary to Nick and Nora’s verbal footsie.
Posted by SJHoneywell at 11:56 PM