Race and Death in Mississippi

Film: In the Heat of the Night
Format: DVD from Rasmussen College Library on big ol’ television. 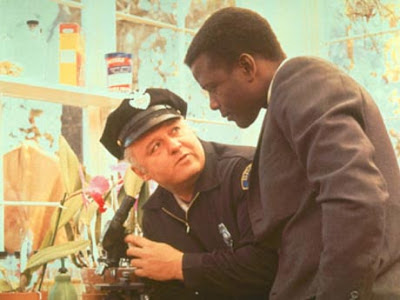 How do you make a great movie about racism? It’s a ripe subject for a film, and it’s a film that’s been made over and over, at least in terms of subject matter, but how do you do it without slamming people in the fact that it’s a movie about racism? The answer to that is simple—you create a movie about something else and place that something else in a position where the racism happens naturally. Of course, it helps to have the services of Sidney Poitier, Rod Steiger, and Norman Jewison.

The set up is the small town of Sparta, Mississippi, where a murder has been committed. As it happens, the victim is a Yankee from Chicago who has come to Sparta to build a factory, something the town desperately needs to get back on its feet. The factory means many hundreds of jobs locally, which makes this death a significant event. There are no initial suspects save one: Virgil Tibbs (Poitier).

Tibbs is a suspect for two reasons; he’s black and he’s a stranger in town. What the Sparta police don’t realize is that in addition to being both black and a stranger, Tibbs is the best homicide cop on the Philadelphia Police Department. Despite his reluctance, he is asked to help with the case he was initially accused of by his chief. This arrangement also comes as something of a shock to the town’s police chief, Bill Gillespie (Steiger).

Tibbs is a man good at his job, but he’s also used to more cooperation than he’s getting in Sparta. In fact, the only real cooperation he gets is from the wife of the dead man, Mrs. Colbert (Lee Grant). She demands that Tibbs be kept on the case despite the fact that it quickly becomes evident that many of the people in the town are uncomfortable with Tibbs and want him dead.

For Virgil, the best suspect in the case is Endicott (Larry Gates), who opposed the factory. That belief is enhanced by the fact that Enidcott grows orchids, and the brake pedal of the car in which Colbert was killed has the growing medium for orchids on the brake pedal. Tibbs is dead sure of Endicott’s guilt, a certainty that keeps him in town longer than is healthy.

What we have here, then, is a pretty good murder mystery. There are plenty of suspects and plenty of false arrests to go along with it. Every few minutes, a new suspect crops up, and many of these suspects can have a case made against them without too much trouble. Each time, Tibbs does everything he can to steer the case back to Endicott, while Gillespie is convinced every time that the new possible suspect is the real thing.

The most famous scene here, and it’s deservedly famous, is when Virgil first confronts Endicott with the idea that he is a suspect. With the accusation made, Endicott slaps Virgil across the face and Virgil slaps him back almost immediately. Endicott’s reaction is a mixture of fear, loathing, and horror, and he tells Virgil that there had been a time when such an action would get a man killed. Virgil walks away, and the continued reaction from Endicott is hatred, close to tears, and painful. More telling is the reaction of Endicott’s servant, who slowly shakes his head and walks away from his disgraced boss.

The racism throughout the movie is palpable and completely realistic for the late 1960s. In fact, the movie had to be filmed in Illinois because the racial disharmony in Mississippi. The movie is forthright about this racism. It never excuses it or justifies it, and doesn’t do a lot to discredit it, either. Instead, the racism is merely shown as a fact to be dealt with, almost as if racism was just another character in the film.

It’s easy to lose sight of the murder mystery here because the significant storyline of both overt and covert racism takes center stage. However, the story and the details of the murder make for a good story, even without the racism angle. It’s a smart film that works on multiple levels, and this one works on several at the same time. It’s a great crime drama, and it’s also a film that explores not the source of racism but the existence of it.

Ultimately, despite the strength of Sidney Poitier’s performance, this film belongs almost entirely to the great Rod Steiger. This is a character that Steiger inhabits completely and totally. Despite his racism, he’s a character that is easy to come to like, even respect. Additionally, while his manner and method of speaking do not change throughout the film, he changes mentally and emotionally by the end of the movie.

This one is not only still worth a watch, it’s worth discussing afterwards, both for the excellent mystery it contains and also for the racism that run through it.

Why to watch In the Heat of the Night: A good murder story and a better lesson in racial justice.
Why not to watch: You’re under the impression that there’s never been anything but happy-happy race relations.
Posted by SJHoneywell at 12:08 AM