Salo, or the 116 Minutes of Covering My Face 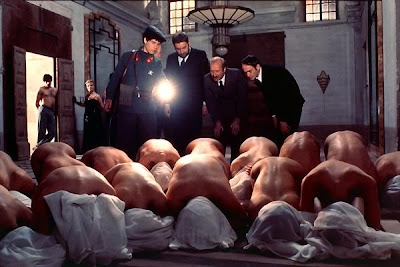 When I decided to create this blog a little more than a month ago, I knew there would be bumps in the road. There are movies that are difficult to locate, and others I can locate but that I have little interest in watching. I know I will find films that inspire me with nothing to say. I knew it wouldn’t always be smooth sailing regardless of how many truly magnificent films I was able to watch.

There are also the films I genuinely fear. I’m not so much of a Philistine that I think art must be beautiful to be meaningful or important. Picasso’s “Guernica” is a terrible thing to behold in the original sense of the word, and it is magnificent because it is so terrible. In fact, much of greatest art in the world is of this variety, great because it causes such intense feelings and responses, and art because it has something to say. Like a vaccination, these works of art are painful, but useful and healthy. They help us draw out the poison of our daily lives, hurting us in the process, but making us stronger in the end.

And then there are things like Salo. It’s difficult for me to know where to start here. One does not respond to Salo; one reacts to it. This is not ugly art, hurting to heal or revealing the ugly side of society to the unwitting sheep-like masses. Salo has all the therapeutic qualities of a punch to the kidneys. This is, no matter what the ivory tower intellectuals have to say, not art. This is a baby step away from a snuff film in its aggressive dislike for its actors, its subject, and its audience. I am convinced the director of this film, Pier Paolo Pasolini, wanted to hurt me in a real way. His goal was not to enlighten or to celebrate, but to damage and destroy. Normally, when a filmmaker wants to cause me pain, I can understand. If I can’t, my reaction is to want to hit back. Here, my reaction is to flee.

Salo does not have much of a plot; it has scenes and episodes. We have a group of four Italian fascists who, with a group of four aging prostitutes, kidnap nine young women and nine young men. These degraded leaders take their captives to a large estate where, over the course of the next four months, they subject these poor young people to every conceivable form of degradation possible. Then they kill them all off and the movie ends.

Often, the movies that shocked audiences when they were made lose their potency over time. Michael Powell’s Peeping Tom, for instance, while still a fantastic film, is not nearly so shocking as it was to the rioting critics who panned it. Much of Salo still shocks as much as it ever did.

However, not all of it is still shocking. Salo is almost entirely about sex, and depraved sex, or at least depraved sex for 1975. There is a tremendous amount of nudity, but very little of this is erotic at all. The women, most of whom are completely nude all of the time, exist not as sexual objects but as things to be degraded as much as possible, reduced by pain and humiliation. The majority of the sex is male-male, certainly beyond what the average person was comfortable with in the mid-1970s. Today, in a world where Brokeback Mountain was a critical and commercial success, homosexual scenes can do little to shock us as an audience.

But while homosexuality no longer holds the taboo it once did, every other form of sexual expression here is as disturbing today as ever. I’ll put it this way; the entire middle of the film deals with coprophagia. If you know this word, you can understand why the middle of the film is difficult to watch. If you don’t know the word, look it up. I can say with all honesty that for the first time in 40+ years of watching movies, I gagged. For a few moments, I thought I was going to vomit into my own lap.

This film is one of the most controversial ever made. Many people consider this film to be nothing more than an exercise in awfulness, the vilest thing ever placed on celluloid. Others defend it, calling it Pasolini’s masterpiece worthy of study and discussion. I agree with the first crowd. If this is art, so is Eli Roth’s Hostel. If this is art, so is Caligula. I can see no difference here. This is degradation for the sake of it and nothing more, a gross-out artist doing the most perverse and perverted thing imaginable simple to freak people out. There’s no merit in this that I can see.

Now, if I could find some bleach to wash the memory of this thing out of my brain and to scour it from my eyes, I’d be happy. Some things can’t be unseen after they’ve been witnessed. Salo is like that, damn it all. Pasolini was murdered shortly after this film was made, and having seen this film, I’m trying to convince myself that his murder was a bad thing; I’m failing at that.

Why to watch Salo, o le Centoventi Gio di Sodoma: You need to brag that you’ve seen the most depraved thing ever distributed in a cinema.
Why not to watch: You still have a modicum of sanity and enjoy things like food, your family, and not plucking your own eyeballs from your skull.
Posted by SJHoneywell at 9:22 PM