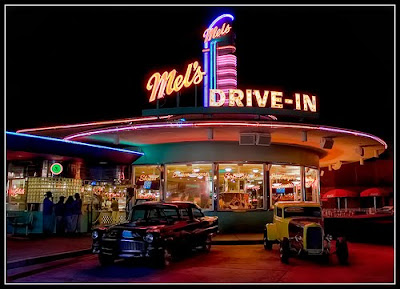 Let’s talk soundtrack for a moment. Plenty of films have great soundtracks. Personally, I think the high point of the film score came with the release of Super Fly and the incredible work by Curtis Mayfield. For a soundtrack of found music, most people look to films by Tarantino and his ability to select the right song for the right mood. As much as I am ambivalent to Tarantino’s work in general, I do have to credit him with a good ear. But the soundtrack for American Graffiti is impossible to top. If I remember correctly, it was a two-record set, and every song was a hit in the early days of rock and roll.

This is completely appropriate for a film that is more or less a love letter to those days when rock records were about teen love and drag races, because that’s really what American Graffiti is. It tells of a much simpler, easier time, when juvenile delinquents caused a little property damage instead of running around armed. Kids showed up to school with a hickey, not pregnant. Okay, I don’t really believe any of that, either. However, it is the position that the film takes, because the film is looking at this time through the lens of 10 years worth of nostalgia.

The film takes place on the last night of the summer of 1962, and concerns the fate of a number of kids, specifically four young men. It’s a pretty standard formula, and one that has been repeated a number of times (the first American Pie film comes to mind). Our quartet consists of Curt (Richard Dreyfuss), who is not sure he wants to go to college on the East Coast. Going with him is Steve (Ron Howard), who is currently dating Curt’s kid sister, Laurie (Cindy Williams), but wants to see other people while he’s away. Staying in town are John (Paul Le Mat), the current king of the dragstrip, and Terry (Charles Martin Smith), a semi-nerd with the unfortunate nickname of Toad. Toad’s biggest problem isn’t his horn-rimmed glasses or his pink shirt, but his lack of a car.

On this final evening of the summer, the four meet, separate, and have their own adventures as the cruise the town for girls and, essentially, look for meaning in their lives. Each one of them is looking for something, and none of them is really sure what the goal is. They’re just doing what they’ve always done, but on this night, there seems to be a little more at stake.

Curt ends up on his own and runs afoul of the local gang of car-crazy juvenile delinquents, the Pharoahs. To save himself from being pummeled, he performs his own acts of delinquency. He also spends the evening chasing a blonde vision in a white T-bird (Suzanne Sommers), going so far as to contact the local radio station to send out a dedication to her in one of the sweetest scenes in the film. Curt doesn’t know what he wants—he doesn’t want anything to change, but comes to realize that life is what he makes it, and the life he wants isn’t here.

Steve, on the other hand, does seem to know what he wants, and knows it’s not here. He cares very much for Laurie, but wants to be set free to experience the world, something that Laurie resists strongly. After all, they’ve been together for a long time and seem like a perfect couple. Their break-up in the middle of the film is a real break in Steve’s life, causing him to reevaluate everything he thinks he wants and needs.

John feels stuck in the town, but doesn’t really seem to consciously want anything more. At least, on the surface, he appears to be content, but there is a sense of ennui in him that runs pretty deep. He cruises the strip and, after offering an invitation to a car full of girls, ends up cruising with the 12-year-old sister of someone else. Carol (Mackenzie Phillips) is at first a nuisance, but eventually, John comes to feel about her like a little sister. Also, since John is the equivalent of the fastest gun, he’s being pursued by another drag racer (Harrison Ford) through the town.

And then there’s Terry, a sort of loveable loser. Terry the Toad is essentially the group’s Ringo. Steve, who is going to college, gives Terry the use of his car, and Terry uses this to pick up Debbie (Candy Clark), and has a series of misadventures with her. All Terry wants is a girl to like him, and will go to any length to convince a girl that he’s worth being with.

And really, that’s the whole movie. Each of the four storylines bounce into each other, and the film is essentially told in order, switching between the four characters throughout as they go through this final evening. In their own way, each of them grows up. Curt discovers that he needs to let go, Steve finds what he wants out of his life, and Terry realizes that he’s not necessarily the loser he thought he was. And then there’s John, who seems to come away from the night with the realization that he won’t always be the fastest gunslinger behind the wheel and needs to discover something to do.

All of this is great. American Graffiti is charming and fun and wildly entertaining. And then there’s the final moment of the film before the credits roll, and we learn about the lives of these four guys after this night. That makes sense with a film like this, and while I’ve seen this film before, it had been a long time and I had forgotten this was there. And these “whatever happened to” bios were ridiculously depressing. It was a huge downer after such a sweet and tender film.

It’s good. Surprise, surprise, it actually had some pretty decent dialogue, which has always been the Achilles heel of George Lucas. Just be warned that when you see the shot of the airplane flying off into the big blue, you may want to stop the film and consider that the end.

Incidentally, you can almost certainly cite this film as the source of the television show Happy Days, and thus Laverne and Shirley as well as the casting of Ron Howard in the first and Cindy Williams in the second. Who knew Richie Cunningham and Shirley Feeney went steady?

Why to watch American Graffiti: Nostalgia done the way it should be.
Why not to watch: The “what happened to” graphics are a let-down.
Posted by SJHoneywell at 11:10 PM