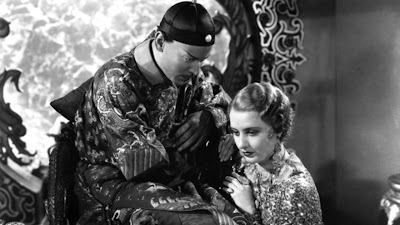 While I like plenty of movies that are a generation or more older than I am, but there are many things about these films that strike me the wrong way. One of these things is the rather substantial racism present in many films of the era. Often, the racism is blatant; non-whites are portrayed as lazy, treacherous, shifty, evil, cheating, and any number of other derogatory adjectives. A more subtle racism is the casting of white actors in non-white roles. This continued for years. Charlton Heston played a Mexican cop in Touch of Evil, after all. But it still bothers me. So when I learn that Swedish actor Nils Asther plays the title role in The Bitter Tears of General Yen, well, I react badly. Inclined as I am to word play, I might call this the bitter taste of General Yen.

We have a missionary named Bob Strike (Gavin Gordon) working in China. His childhood sweetheart, Megan Davis (Barbara Stanwyck) has arrived in China to marry him. The wedding is to take place immediately, but is postponed when Bob decides he needs to act immediately to rescue orphans trapped in a war zone. Megan goes with him. He gets a pass from bandit leader General Yen (Asther) and heads off, but runs into trouble. His car is stolen by one army or another, and the pair run off with the children, trying to find rickshaws. Both Bob and Megan are knocked unconscious.

Megan is rescued by General Yen, who she met on her arrival; Yen’s car sideswiped her rickshaw, injuring her driver. She goes back to his rather palatial estate with him, at first as a sort of lost lamb, then as a sort of captive, and finally as something of a spoil of war. See, back in the “civilized” world, everyone things Megan is dead. And there’s the fact that Yen is quickly becoming infatuated with the pretty young American.

We meet a few other people as well. First is Jones (Walter Connolly), Yens’ financial advisor. Also important are Mah-Li (Toshia Mori), Yen’s concubine, and Captain Li (Richard Loo), one of his military commanders. It’s evident that Mah-Li and Captain Li have something going on between them. It’s also refreshing to see these roles actually played by Asian actors, even if Toshia Mori is actually Japanese, and is thus evidence of the “they all look alike” stereotype.

Regardless, the real controversial part of this film happens a touch before the middle. It’s not the implied nudity of Stanwyck in the bathing sequence, but the dream sequence before this. She falls asleep and imagines a gross stereotype of Yen breaking into her room to ravage her—in this he looks very much like a demon or the traditional Chinese hopping vampire. In a comic book sequence of her dream, a masked man breaks jumps in through her window and fights off the terrible invader. He then removes his mask and reveals not Bob Strike, but a much more genteel and civilized version of Yen, who she finds rather appealing.

Ah, miscegenation. That was the problem with the film back in the ‘30s. It was expected that anyone and everyone would be attracted to a pretty, young white woman. After all, even King Kong was fatally attracted to Faye Wray. The issue was that pure, virginal, all-American and missionary (and thus Christian) Megan Davis was in turn attracted to General Yen. That was something that middle America (and quite a bit of the coasts as well) were simply not ready to see. It didn’t matter that these were actors, nor did it matter that underneath the makeup General Yen was just as white as Barbara Stanwyck. The fact that the character could see someone non-white as desirable was, in a word, problematic.

However this (and the casting of the lovely, lovely Barbara Stanwyck) is really one of the few things to make this film interesting. It is otherwise a fairly standard story of forbidden romance during a time of war, the sort of thing that crops up all the time in various guises at least once a year. I suppose it’s worth adding that the war scenes are really well filmed and pretty intense, especially for the time.

The film ends strangely, and might well be evidence of a bit more racism against the Chinese. The only Asian who proves to be true to anything like his or her word is the one played by the white actor. I suppose that shouldn’t be too much of a shock, really. The “sneaky Oriental” stereotype ran pretty deep.

A strange film, but Barbara Stanwyck cures a lot of ills. It says a lot that my grandparents could have (and frankly may have) seen this film in the theater when it was new. My grandfather was born in 1910, and his wife a few years later. While this film was banned in any number of places, it may well have played in Des Moines. And they may well have been shocked by the romance between East and West as depicted. And I, two generations later, see this most controversial thing as a non-issue. There’s still a distance to go, but we’ve come a long way.

Why to watch The Bitter Tea of General Yen: While still racist, less racist than you might expect.
Why not to watch: Because the Chinese General Yen is played by a guy from Sweden.
Posted by SJHoneywell at 11:57 PM