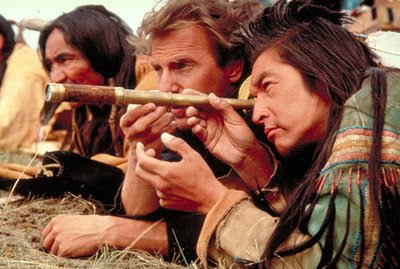 There’s a rule for Kevin Costner films, or at least something of a guideline. Essentially, Kevin Costner films that are Westerns or films about athletes are pretty good, and anything else in his film catalog is essentially crap. Thus, Silverado, Field of Dreams and Bull Durham are excellent films and worth watching. On the other side, Waterworld and The Postman suck. There are exceptions, of course. There are those who will tell you that Dances with Wolves is one of those exceptions. We’ll be discussing two noteworthy exceptions soon enough.

In fact, Dances with Wolves is one of those “Oscar mistakes” that happen every now and then. For many, it’s especially galling that this film won Best Picture and Costner won Best Director over Scorsese and Goodfellas. I’m not going to comment on that. That all boils down to opinion, and truthfully, Goodfellas probably is a better movie and will have a longer and more meaningful impact on film. But I’ve already written about that film, so I’m going to leave off talking about it now.

What surprised me most about putting Dances with Wolves in the spinner was the length. I remember this being a long movie, and I had assumed it would be a touch over three hours. Instead, it’s a touch short of four. For all that length, it doesn’t drag terribly, although it could easily be cut down to something much closer to three hours without losing much.

Anyway, this is the story of Lt. John Dunbar (Costner), who starts the film as a Union officer badly wounded and moments away from losing his leg to a surgeon’s knife. He manages to squeeze his boot back on and drag himself outside to the battle line, where the North and South are in an uneasy ceasefire. Looking to end his own life, Dunbar rides out toward the Southern lines, inviting fire, and giving the Union the opportunity to charge and overwhelm the Confederates. As a reward, he gets some quality medical care, keeps his leg, and gets his choice of post. He selects Fort Sedgwick, which is as far out on the frontier as he can get.

When he gets there, he discovers the fort completely abandoned, and takes it upon himself to rebuild it. He soon encounters the local tribe of Lakota Sioux, and the bulk of the film deals with his relationship with these people. The most important of these to Dunbar are Kicking Bird (Graham Greene), Wind in His Hair (Rodney A. Grant), Ten Bears (Floyd Red Crow Westerman), and Stands with a Fist (Mary McDonnell), a white woman captured by the Lakota at a young age. Because she can still speak a little English, she serves as interpreter for the meetings between Dunbar and Kicking Bird, and also as Dunbar’s instructor in Lakota. And (naturally) romance blossoms.

And then the white men come and ruin everything as only true melodramatic villains can. Really, the entire point of the film is to demonstrate for about three hours the essential nobility of the native people and then hammer home the essential recklessness and evil of the white invaders. Just as the pendulum swung far one way with Westerns back in the day painting the natives as savages, Dances with Wolves kicked it to the opposite extreme, positing that the Lakota maintained an essential human nobility and dignity that we white people could never match.

The truth? It’s probably somewhere in between.

But in truth, Dances with Wolves is an excellent film, one that has suffered from the backlash of being seen as better in the moment than a film that has and will have a much more lasting impact on film. It’s the same thing that happened to Titanic. This film gets the beat down from people who think that Goodfellas should have won more awards, and to make the case, are happy to bring up every possible negative of Costner’s film.

The melodrama is overdone; the Union officers who arrive at the end, for instance, lack only Snidely Whiplash mustaches and train tracks to tie a virgin to. The romance between Dunbar (who is given the Sioux name Dances with Wolves because of his relationship with a wolf he names Two Socks) and Stands with a Fist is telegraphed a full hour ahead of it becoming reality. Evidently, this is the main addition of the version that I watched, and while this isn’t bad, it doesn’t really add much of importance to the film itself.

Dances with Wolves isn’t going to make anyone a Western fan. It’s also not going to turn anyone into a Kevin Costner fan. But, it is pretty good. But I heartily recommend the shorter, 3-hour version rather than the much beefier one. And really, you should be prepared for a giant guilt buffet, particularly if you are a white American.

Why to watch Dances with Wolves: It’s better than you remember.
Why not to watch: It plays the guilt card with reckless abandon.
Posted by SJHoneywell at 7:47 PM