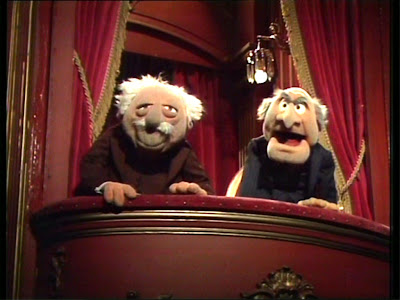 We’re going to go off script for a day. Sue and I took the girls to a matinee showing of The Muppets yesterday. There really isn’t a chance in hell that this film will ever be place on The List. There are already enough corny and sappy kids’ movies here and too many films from 2010 that will be added in the next edition (in my opinion) to make room for a film that is reminiscent of sappy Judy Garland/Mickey Rooney musicals from yesteryear. But I still want to talk about this film. I see things in the theater so rarely, that when I see something I really like, I’m compelled to comment.

We’re introduced to Walter (voiced by Peter Linz), who is a Muppet living in a human world with his brother, Gary (Jason Segel). Gary has been dating Mary (Amy Adams) for ten years and plans a big, romantic dinner in Los Angeles with her. They go, and Gary insists on bringing Walter, who has spent his entire life watching old Muppet Show reruns. All Walter wants is to see Muppet Studios. However, the studio has fallen on hard times. The Muppets have all gone their separate ways, and wealthy oil tycoon Tex Richman (Chris Cooper) wants to buy the studio and drill for oil underneath it. Of course, the only way to save the studio is for the Muppets to join up again and put on a huge show/telethon to raise the $10 million needed to buy the studio back.

Really, that’s it. Along the way, we get a few songs (some of which are disturbingly short) and a lot of Muppet-style hijinks, the sort of stuff those of us old enough to remember The Muppet Show can recite by heart. All, or at least many of the Muppets show up at times—we spend a great deal of time with Animal and the rest of the Electric Mayhem (still a great band name), Fozzie, Scooter, and of course Kermit and Miss Piggy. Many of the other Muppets are tangential to the film—I’d have liked a lot more Rowlf the Dog, for instance.

This is a film that has its heart in the right place, though, but it tries to show it far too quickly. The film feels a little short. There’s room here for another 10 minutes of sight gags and bad jokes. That is what I’d have liked to see.

I love how self-aware the film is, though. Throughout there are a number of jokes made specifically referring to the fact that this is a film. There are also plenty of callbacks to the original series of Muppet films, the television show, and those Garland/Rooney musicals of yore, and many of these things are done consciously as well. For instance, when the gang goes to collect Gonzo, we discover that (much like Mr. Fabulous in The Blues Brothers), Gonzo is sitting pretty and has no real reason to give up his life. But, of course, he does.

And it’s here that there’s a real plot hole. Gonzo runs a huge plumbing company, and to join the rest of the team, he literally blows it up. One wonders why he couldn’t have simply sold the company, thus giving the Muppets a great deal of the money (if not all) that they’d need for the studio. But, of course, if he did that, there’d be no movie. Still, it’s the first thing I thought of.

The greatest level of self-awareness of this film, though, is the fact that the Muppets live in the real world and have real problems and real lives. Kermit, who has always been a beacon of hope and self-reliance, has doubts as well as relationship problems (real ones) with his love interest. Kermit having doubts wouldn’t have happened in an earlier time. That, more than anything is what brings this film into the modern day.

The writers of this film love the Muppets as characters. That is evident. And, fortunately, that’s enough. This film is fun and heartwarming and sweet. Go see it and take the kids. This is a “feel good” film of the highest order; it will make you feel good. And if you don’t get a little misty when Kermit sings “Rainbow Connection,” there’s something off with you.

Why to watch The Muppets: Because it’s charming and sweet, and reminds us that cynicism isn’t always right.
Why not to watch: Plot holes, Y U NO get fixed?
Posted by SJHoneywell at 1:59 PM