I don’t know when filmmakers really first took a long look at the idea of racism as a topic ready for film. Griffiths touched on it back in the silent era, albeit not very sensitively. But it took a very long time for Hollywood to actually really address ideas of racism and racial equality, a topic still being addressed to this day. In many ways, today’s results are just as uneven as they have ever been. We’ve gone from a culture which depicted non-whites as negative stereotypes to one that has a tendency to depict non-whites as positive stereotypes. 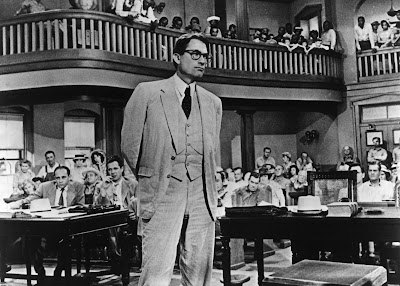 To Kill a Mockingbird goes for something in the middle, attempting to depict something much closer to reality. The main black character in the film, Tom Robinson (Brock Peters) is truly neither negative nor positive, but is merely innocent. He’s nothing more than a man accused wrongfully of a crime, and as a black man, is unable to get anything like a fair trial in Depression-era Alabama.

Ah, but I’ve gotten far ahead of myself here. This film is an accurate depiction of the book of the same name by Harper Lee. Our main character here is Scout (Mary Badham), a young girl of allegedly six, despite the fact that she comes off much more as either eight or nine. She and her brother Jem (Phillip Alford) live with their father, Atticus Finch (Gregory Peck), who is a lawyer in this small Alabama town. Over the summers, they gain a playmate in Dill (John Megna), a startlingly ugly little kid who spends summers with his aunt.

It is generally through the eyes of these children, particularly Scout, that we see the film. When Tom Robinson is accused of assaulting and raping a white woman named Mayella Ewell (Collin Wilcox Paxton), we learn almost nothing of the crime or the preparations of the trial until mid-way through the film. While these events are central to the story, they aren’t central to the kids, and are thus glossed over until they become central to them.

Much of the film deals with the identity and nature of Arthur “Boo” Radley (Robert Duvall in his first real screen role), the allegedly insane son of the Finchs’ neighbor. Boo Radley is a figure of fascination and fear to the young kids. They are fascinated with his insanity and his evident social reticence, and terrified of the story that he once attacked his own father with a pair of scissors.

The reason this film works, and work it does, is in no small part because of the kids, Scout in particular. While she absolutely does not pass for the age she is supposed to be, she is incredibly natural in the role, and completely believable. She comes off as both wise and innocent, which is the perfect and necessary combination for the role. There is a sense that, for instance, when she prevents a lynch mob from stringing up Tom Robinson before the trial, that she may know precisely what she is doing.

While the film comes from Scout’s point of view, and from a lesser extent from Jem’s (particularly at the trial), it is Atticus who is the real center of the film. As the defense attorney, he is obviously central to the trial, but he is also the moral center of the film as well. He decides to defend Tom regardless of the personal cost to him. He knows that in this small Alabama town that his case is a loser no matter what. He demonstrates clearly the man’s innocence—the fact that Tom had no use of his left hand is a clear indicator of that—but Atticus knows that the case is lost from the first moments. His pleading with the jury is evidence of this as well. And yet, he goes through with the case because it is right to do it. One of the best and most moving moments of the film comes after the conclusion of the trial. Tom has been led out and the white spectators have left. Atticus stands alone on the courtroom floor packing his briefcase while the black spectators stand in the balcony above him. As he turns to leave, the black reverend tells Scout to stand as her father walks past, a gesture of respect for this man who has sacrificed his own reputation simply because it was the right thing to do.

There is a sweetness to this film despite its subject matter. There is a sense of nostalgia, of childhood in the games the kids play, the mystery they create around Boo Radley, and the loss of innocence as the trial comes to its inevitable conclusion. In many ways, the kids grow up through the film because they are forced to do so by the events that surround them. They, after all, are the children of the man who defended Tom, making the school playground a suddenly dangerous environment.

This is a truly great film, rewarding and deep and intelligent. Don’t let the fact that the book is regularly assigned to junior high students prevent you from finding this and watching it. You will not be disappointed.

Why to watch To Kill a Mockingbird: A bona fide American classic for a reason. Why not to watch: Robert Duvall looks weird with hair.