Film: The Social Network; A Place in the Sun
Format: DVD from Rockford Public Library on kick-ass portable DVD player. 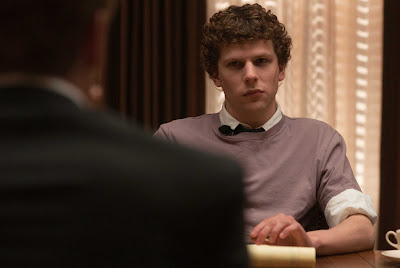 Anyway, The Social Network is the Facebook story, because when it comes to online social networking, it is the 800-lb. gorilla. MySpace may still have 30 million users, but Facebook has 800 million worldwide—so many that I’m surprised my version of Microsoft Word doesn’t recognize the name of the site automatically. The film takes place essentially as a flashback as two separate lawsuits have been brought against Facebook CEO Mark Zuckerberg (Jesse Eisenberg). As each new topic comes up, we get flashbacks to what actually happened.

I’m resisting recounting the plot, not for any spoiler reasons or because it’s not worth recounting, but because this movie is surprisingly dense. I mean this in a positive way; the first hour of the film feels very much like two hours simply because of everything that it includes. There’s a lot going on here, and the first hour of the film recounts the story of the website’s initial genesis, creation, and the start of its expansion. A lot of characters come and go, and there is a tremendous amount of story told here. In the hands of a less confident and competent director, this would be at least a three-hour film.

And yet, it never becomes bogged down or overwhelmed by its plot. Despite the vast number of characters here, the story is also very easy to follow. Essentially, Zuckerberg is a computer programming genius, but also (at least according to this film) has jealousy issues, a desperate need to be the center of attention, and the social equivalent of Tourette’s syndrome. The film opens with his break-up with his girlfriend, Erica Albright (Rooney Mara), who he destroys on his blog. Throughout the film, when he feels he’s being snubbed or not taken seriously, he utters incredibly offensive, rude, and otherwise abusive things to the source of his personal shame, particularly to his best friend and original business partner, Eduardo Saverin (Andrew Garfield).

And really, that’s sort of the path the entire movie takes. Zuckerberg can’t help but irritate, annoy, bother, or otherwise piss off everyone he knows in his quest to create Facebook, and thus invent himself in some way. Eduardo and Erica are only two of the casualties. He also draws a lot of attention from twin rowing Olympians Tyler and Cameron Winklevoss (Armie Hammer is credit with both roles, and Josh Pence is additionally credited with Tyler) and their associate Divya Narendra (Max Minghella). He also has a few choice encounters with Napster founder Sean Parker (Justin Timberlake).

This is one of those strange films in which almost everyone is, or at least acts, reprehensibly. While the Winklevoss twins and Narendra are certainly not blameless, in many ways Zuckerberg and Parker come off as the film’s biggest villains. Only Eduardo Saverin really ends up being shown in anything like a positive light. While his actions at one point jeopardized the entire venture, his actions are also completely understandable in light of everything that happens during the course of the film.

The Social Network got a lot of hype last year, and a great number of people were disappointed when the film didn’t win Best Picture at the Oscars. I can see that. I am perhaps showing my age when I say that I didn’t like this film more than I liked The King’s Speech, but I do understand why so many people enjoyed it. In many ways, Mark Zuckerberg is the most relevant famous person in a lot of lives. He is very much like the Bill Gates of the generation after mine, and thus the film about him is sure to resonate with many.

What’s interesting to me, though, is that it reinforces something I’ve long suspected is true. People who end up in positions like Mark Zuckerberg get there for a variety of reasons. One, plainly, is an obvious and specific genius. Facebook, at this point, exists in the way it does and with the popularity it does simply because it does. If you want a social presence online, it’s the only real option, especially after what looks like the spectacular failure of Google+. But a great deal of this film happens because Zuckerberg and Parker especially act in absolutely the most cutthroat manner possible. These are not nice men working for a better world, but men working for their own end, and to hell with everyone else, including friends. They sacrifice everything simply to be on top, and stop at nothing to proclaim their own victory immediately to those they have trampled to get there.

Is this accurate? I have no idea. It’s what’s here in the film, but I have no idea whether or not this film reflects the reality of what happened. However, there’s a lot of evidence to suggest that the Erica Albright character doesn’t exist in reality—Zuckerberg has had the same girlfriend since before Facebook was created. So…one wonders. 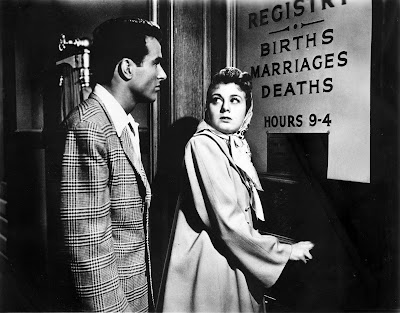 A Place in the Sun tells a more grisly, brutal version of the basic social climbing story. George Eastman (Montgomery Clift) is the nephew of a man named Charles Eastman (Herbert Heyes). The uncle hires the nephew to work in his factory out of some combination of familial respect and kindness. Since the uncle is extremely wealthy and the nephew is extremely poor, it’s kind of a charity case. But George proves himself pretty capable.

Sadly, George also proves himself unable to abide by the single important rule of the factory—don’t date any of the other workers. He begins seeing Alice Tripp (Shelley Winters) who works in the same part of the factory he does, almost out of convenience. Alice is naïve and a bit in awe of George’s last name, but ultimately begins to understand that he’s from the wrong side of the family and isn’t really starting at the bottom as she believes.

But, George does begin to rise in the company, and as he does, he attracts the attention of Angela Vickers (Elizabeth Taylor), a society girl with more time and money than anything else. The two quickly fall for each other, this time George being the one who is dazzled by the promise of money and romance. Sadly for him, Alice Tripp has some bad news; she’s pregnant and demands that he marry her, despite the fact that both of them will lose their jobs because of it.

And so George begins to think of what he can do. He has no way out. He wants nothing more than to be with Angela, but Alice has him trapped with her pregnancy, and she is insistent that he marry her no matter what. And so he starts to think of what to do, and he remembers that poor naïve Alice can’t swim and that the Eastmans have a house on a lake nearby, and all of his plans start to fall together, and those plans involve Alice only up to the point where he pushes her out of a boat and she drowns.

It’s an interesting film because it can easily be interpreted in a variety of ways. On the one hand, this is pure bourgeoisie propaganda—the people with money aren’t to blame in any of this. They try to bring the poor boy into the fold and what happens? His greed and lust become the seeds of his downfall. In truth, it is Angela who is the most sympathetic character here, and the one closest to being considered a true innocent. Alice is a nag and a scold and George is just plain vicious and scheming. But it’s innocent (and fabulously wealthy) Angela who ends up with the broken heart, thanks to the evil man from the lower social order.

On the other hand, the left-leaning among us can interpret it as a fable about the ills of wealth and power. George was happy where he was, and was plenty happy with Alice until Angela showed up and tempted him higher. George’s betrayal of Alice doesn’t come from inherent evil, but the evil he comes to in trying to adapt to the unfair advantages of those in significantly higher economic bracket. George loses his soul because losing one’s soul is the only way to truly reach that sort of elite economic position—and to get there, George must betray everything he has ever believed in.

Which interpretation is correct? I don’t know. It’s another film in which I dislike almost every character on the screen for the entire film. And yet, the story is quite compelling, well acted, and gutsy for the time. After all, Alice is pregnant out of wedlock, it’s 1951, and the Hays Code is very much still in effect. For the time, this film walks a razor’s edge of what it can even talk about openly—Alice’s confession of pregnancy had to raise more than a couple of eyebrows.

Still, this is not an easy film to recommend. It’s a good story and a good film, but it’s also rather unpleasant, and leaves a bit of an oily feeling after watching.

Why to watch The Social Network: It’s a story that defines an entire generation.
Why not to watch: Almost everyone in this film is a walking sphincter.

Why to watch A Place in the Sun: A story that feels both Hollywood and based in gritty reality.
Why not to watch: No one to really root for.
Posted by SJHoneywell at 10:58 PM