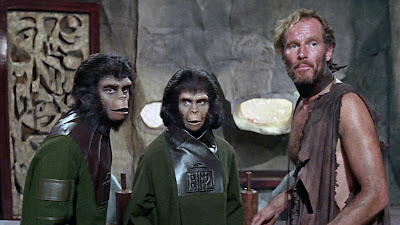 But, it has an incredible pedigree. The novel was written Pierre Boulle, who also wrote the novel Bridge on the River Kwai, and the screenplay was co-authored by no less a person than Rod Freakin’ Serling. Director Franklin J. Schaffner’s other films include Patton and Papillon. In short, there’s a lot going for this movie right off the bat.

But it is silly. A quartet of astronauts blast off into space and travel at relativistic speeds for 18 months, assuming that when they land it will be far into the future. Their ship lands in a lake and begins sinking, and one of them, the lone woman (Dianne Stanley), has experienced a problem with her containment unit and has thus died and aged. The ship starts sinking immediately and the three survivors—Taylor (Charlton Heston), Landon (Robert Gunner), and Dodge (Jeff Burton) make it to shore and start exploring.

What they discover is a world in which humans are a degraded species and (to quote Dr. Bobo from the later years of Mystery Science Theater 3000) apes rule the world. Humans on this world can’t even talk, and are essentially parasites in the ape world. Interestingly—and far beyond the realm of typical possibility—the apes speak English and seem to have early human technology except for the fact that they have relatively modern guns. Everything else, though, is primitive.

It’s Taylor who will be our main character. The apes round up a collection of humans who are raiding their crops, killing many, including Dodge. The rest are captured, and Taylor is wounded in the throat, preventing him from speaking. However, it’s soon evident to several of the apes that Taylor has genuine intelligence. Of primary importance here is Dr. Zira (Kim Hunter), who works with animals and specializes in humans. Zira calls Taylor “Bright Eyes” and is shocked to discover that he understands speech and can write.

Zira is engaged to Cornelius (Roddy McDowall), who is the simian equivalent of an anthropologist. He has a hypothesis that apes evolved from lower orders of animals, specifically from humans, but such talk is considered heresy, particularly from the chief ape scientist and spiritual leader, Dr. Zaius (Maurice Evans). Of course, eventually Taylor regains his voice, and the fact that he is capable of actual speech and shows signs of real thought is problematic for the apes. So naturally Taylor escapes with the help of Zira and Cornelius as well as Zira’s nephew Lucius (Lou Wagner) with the apes in hot pursuit. There's a lot going on in a place called The Forbidden Zone, and there's a great deal of evidence to suggest that Zaius knows what's there, and that what's there is something like blasphemy.

As I said at the top, the premise is entirely silly. And yet, almost despite itself, it’s a premise that works. In large part, the film works because of how thoroughly the actors buy into it. Everyone, particularly Heston, buys into the premise of the film to really sell it. The film needed that, because without it, it would quickly devolve into camp, and not good camp.

And so, we have this strange thing. We have a movie with this incredible pedigree, with good actors performing good work, and all of it in service of a story that is silly on its face. There’s no good reason, for instance, that the apes would speak English when we are supposed to presume that the film is taking place on a planet in a different solar system. Language is far too complex for it to evolve in exactly similar ways on two distinct worlds. What this means is that the surprise ending—one of the most legendary in film—doesn’t come as much of a surprise to anyone who doesn’t completely buy into the premise.

Despite all of this, it’s an impossible film not to enjoy. Yes, the concept is silly and ridiculous, but it doesn’t matter because it’s also a great deal of fun. Additionally, the costuming is tremendous, and while the ape faces do look a bit fake and rubbery, they’re also surprisingly effective at allowing for facial movements, expressions, and speech.

After this first film, the Planet of the Apes did go the camp route, eventually becoming far campier than the first film could have ever been. The remake was ridiculously weak, starting from the same premise and substituting a huge budget for things like quality. I’ve heard a lot of good about the latest film, but haven’t seen it. I’m not sure I want to, really. I like the purity of this film, goofy premise and all, and I’m satisfied with that.

Why to watch Planet of the Apes: It is essential science fiction viewing.
Why not to watch: If you don’t buy the premise, the entire film is shot.
Posted by SJHoneywell at 9:08 PM