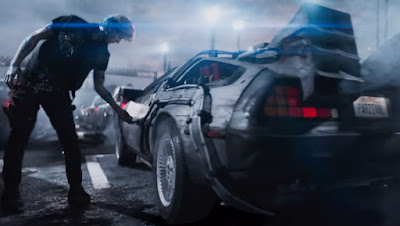 I’m going to make some people mad now, or at least disappoint them. Ready Player One is pop culture pornography designed to wow anyone who sees it into loving it for its veneer and flash and ignore the fact that underneath, it’s the same kind of male fantasy fulfillment that this sort of film tends to be.

I say this as someone who could not be more of the movie’s target audience. Ready Player One is obsessed with the 1980s; I graduated from high school in 1985. It is in many ways the same sort of standard power fantasy that this sort of science fiction that I grew up on uses over and over. I recognized almost everything in the movie, from a ton of the avatars to the face of the demon on the back of Aech’s truck. I’m so much the target for this movie that when I knew the first piece of information about the third challenge in the film, I knew exactly what the answer was. But we’ll get to that soon.

To understand what motivates him, you need the backstory on OASIS, which seems to have been ripped directly from the story of Apple Computer. Uber-nerd James Halliday (Mark Rylance) and partner Ogden Morrow (Simon Pegg) created OASIS and ran it until Halliday eventually forced his friend out, taking it over, and turning it into a pop culture haven. In OASIS, people can be and do anything, and there are places where, for instance, they can compete in massive PvP battles, earning money from the corpses they create. The real thing going on, though, is a massive treasure hunt.

See, in the real world Halliday has died. Before he did, though, he set up a massive Willy Wonka-esque contest. The first person to solve the three quests would receive three keys and would win…OASIS. Initially everyone tried to win, but now, years later, only a small handful are still attempting to find the keys. Called “gunters,” short for “egg hunters,” they compete in a road race that leads to the first key and that no one has ever completed.

So, we need companions and we need foils for Wade/Parzival. On his side will be Aech (Lena Waithe), a mechanic in OASIS and Parzival’s best friend. It’s a shock moment when Aech proves to be a woman in the real world. Aech’s PvP friends Sho (Philip Zhao) and Daito (Win Morisaki) will soon be siding with Wade as well. Rounding out what will become known as the High Five is Art3mis (Olivia Cooke), who will also be Wade’s love interest.

The foil is the IOI corporation, which has dedicated itself to finding the keys and taking over OASIS. Headed by Nolan Sorrento (Ben Mendelsohn), IOI has legions of players, many essentially working as indentured servants when the company buys up their debt and forces them into servitude. Sorrento is aided by Zandor (Hannah John-Kamen), a real-world enforcer and i-R0k (T.J. Miller), an OASIS version of the same thing. We’re soon privy to the fact that Sorrento is pretty much pure evil and like many a Spielberg villain, is just in it for the money.

There are so many things to talk about here, and to discuss them fully, I’m putting the rest of this review under a spoiler tag. If you don’t want to know what happens, stop reading at the end of this paragraph. This will also be one of the last places I say something nice about Ready Player One. It’s really pretty. I mean, this is one of those rare movies that seems to jumpstart our imaginations in what film is capable of looking like. The Matrix did the same thing; so did Avatar. It will probably, even deservedly, win some technical Oscars. Anyway, it’s spoiler time.

So much in Ready Player One happens specifically because we’re given a world where just about everyone is dumb. The road race that leads to the first key is unwinnable. We’re told it’s unwinnable. No one has won it in the multiple years that it has been run. But Parzival figures out the key to winning by watching a completely random clip about Halliday’s life and connecting the dots—dots that someone almost certainly would have connected years before.

As I said above, I knew the substance of the third quest the minute it was known that it involved Atari 2600 games. Of all the games available for the 2600, I knew the key lay with Adventure, and I knew that the key wouldn’t be winning the game, but finding and using the Grey Dot. In fact, I can tell you that the movie gets the Grey Dot’s location completely wrong. Oh, it’s in the black castle alright, but it’s in a secret room that requires the purple bridge to find. I mean, if you’re going to make the quest that easy to guess, why not show it being done the right way? And really, if you wanted to be impressive…use something like Yars’ Revenge or Superman.

The truth is that Ready Player One is exactly the movie it wants to be. I don’t bring things like gender and race into this blog that often unless they are a part of the movie in question, but in this case, I feel I have to. This is white male power fantasy. It’s the white guy who is the savior, and who has two women (one black) and two Asian men sacrifice themselves because he’s the chosen one who is going to save them all. He’s just another white Jesus, this time with a kick-ass VR rig.

Additionally, the presence of T.J. Miller is a problem. Miller has been credibly caught up in the Me Too movement. It would have been easy to record another person in his role—he never actually appears on screen. It’s another piece of arrogance in a movie filled with them.

There are more problems with this movie, but I’ll stop here. It’s pretty, and beyond that, it’s pretty empty of anything interesting or very different, sadly.