Wednesday Horror: The Hand that Rocks the Cradle

Films: The Hand that Rocks the Cradle
Format: DVD from NetFlix on The New Portable. 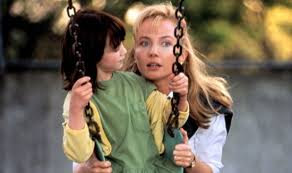 I don’t think that I’d be really capable of directing a movie. If I had to, I’d probably go for horror because it seems to me that horror is probably the go-to genre for a new director. Of all of the genres out there, thrillers are probably the hardest to do well. To make a really effective thriller, you have to do a lot of juggling of plot, character, what you show and what you hide, and a great deal more. The Hand that Rocks the Cradle is one of those movies that seems like it has such an obvious premise that you can’t believe it wasn’t done a couple of hundred times already. While there are certainly elements of horror here, since this is pretty much entirely believable, in my world it falls more into the thriller category.

Claire Bartel (Annabella Sciorra) is pregnant with her second child and goes to a new OB/GYN for essentially a wellness check. The doctor (John de Lancie) gets a little more friendly with her than she would like and, freaking out, she confesses to her husband Michael (Matt McCoy) that she thinks he molested her. Eventually, she presses charges, and a collection of other women step up and make the same accusation. Months later, Dr. Mott is facing the loss of his medical license, fines, and possible prison. He commits suicide, leaving his wife (Rebecca De Mornay) with frozen assets and nowhere to go. Distraught, she faints and in the course of the trauma, loses her child and is forced to undergo an emergency hysterectomy. As she recovers, having lost everything, she sees Claire Bartel on the news and vows revenge.

And this is the rest of the movie. Mrs. Mott changes her name to Peyton Flanders and arranges to be hired by the Bartels as their new nanny. From this point forward, everything she does is about undermining Claire and her position in the family. Having been pregnant, she maintains her milk supply and breastfeeds the infant. She begins to keep secrets with the Bartel’s daughter Emma (Madeline Zima) and starts to turn her against her mother. She also targets Solomon (Ernie Hudson) the Bartel’s mentally challenged handyman to keep him out of the way.

What makes The Hand that Rocks the Cradle work is just how slowly and effectively it builds. Peyton—we’re never told if that’s her real name or not—is cautious, disturbing, and patient. Everything she does is calculated to damage Claire as much as she can without any possibility of anything coming back at her. When Solomon sees her breastfeeding the baby, she starts to mention that he is too familiar with Emma, and then plants a pair of Emma’s underwear in his toolbox and then arranges for Claire to find them. It’s subtle, and while we as the audience are privy to just about everything she does, we also understand clearly that no one else sees what she is doing.

There are a couple of great moments in The Hand that Rocks the Cradle. The first of these has already been mentioned—that first moment when Peyton breastfeeds the baby is horribly disturbing. We know exactly who she is, we know that she’s lost a child and blames Claire, and we don’t really know what she is capable of doing. And while it’s a relief that she doesn’t cover the child’s face with a pillow, what she does do is such an incredible violation that it’s almost as bad—it’s complete subversion of something that should be natural and healthy. The second moment really belongs under a spoiler tag.

Peyton’s identity is discovered by Marlene Craven (Julianne Moore), a longtime friend of the Bartels. She heads over to warn Claire but discovers Peyton instead. Needing to get rid of her, Peyton sends Marlene out to the greenhouse, which she has rigged to collapse. It does, killing Marlene. Peyton is aware that this will trigger an asthma attack in Claire, which it does. Before Claire arrives home, Peyton casually and calmly empties all of Claire’s inhalers. It’s chilling, especially as she hums quietly to herself while she does it.

There’s quite a bit to like about this movie, and virtually all of that starts and ends with Rebecca De Mornay. She is capable of pulling off everything that she needs to in this film. She can turn on the crazy at the drop of a hat and is also capable of looking completely innocent. There’s also a moment later in the film where she attempts to seduce Michael, and she’s capable pulling that off as well. In truth, this is absolutely her movie, and it’s far less of a film when she’s not on screen.

The Hand that Rocks the Cradle is a solid thriller. It works not simply because of the fine cast (Ernie Hudson is an unsung hero in this as well) but because of how cleverly it exploits a very real fear in such a realistic and obvious way. That it’s obvious is not a complaint on my part. It’s so obviously an exploitable fear that it’s shocking this movie isn’t released in one version or another every couple of months.

Why to watch The Hand that Rocks the Cradle: It’s creepy as all hell.
Why not to watch: It’s a lesser movie when Rebecca De Mornay is not on screen.

Email ThisBlogThis!Share to TwitterShare to FacebookShare to Pinterest
Labels: Curtis Hanson, The Hand that Rocks the Cradle, thriller