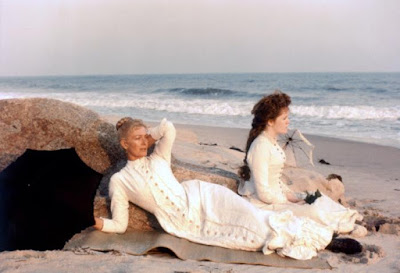 I’ve never been the biggest fan of Merchant/Ivory productions. Oh, I’m happy to admit that they are pretty and that they are well made. They just don’t interest me that much. Historical romances don’t really do a great deal for me in the best of situations (“Not always true!” I hear you say. “You loved Sense and Sensibility!”). It just seems that so many of the Merchant/Ivory movies are so timid, like everyone feels like touching another person will cause one of them to break. That being the case, I can’t say that I was too excited about The Bostonians.

The Bostonians is a weird sort of love triangle, one that today would almost certainly delve into the clear lesbianism of at least one of the characters, but that’s not what happens here. As the title suggests, we’ll be spending a great deal of our time in Boston, in this case about 10 years after the American Civil War. The apex of our love triangle is Verena Tarrant (Madeleine Potter), the daughter of Dr. (Wesley Addy) and Mrs. Tarrant (Barbara Byrne). He is a “mesmeric healer” while Verena has discovered a talent for oratory and a penchant for speaking on women’s rights. In this role, she has earned a number of followers and a friend in the press in the person of Mr. Pardon (Wallace Shawn).

Meanwhile, Basil Ransome (Christopher Reeve) has arrived in the area from Mississippi and meets up with Olive Chancellor (Vanessa Redgrave), a cousin. Olive is absolutely dedicated to the suffragette movement and Basil is someone she quickly determines to be the enemy. And, of course, the two quickly become dedicated to Verena Tarrant. Basil falls for her quick wit, charm, and outgoing manner. Olive becomes entranced with her oratory skills and her position on women’s rights.

As I said a couple of paragraphs ago, if this were to be remade today, a great deal more would be made of the clear attraction Olive has for Verena. It’s certainly not shied away from here, but it doesn’t really go anywhere significant over the course of the film. The bulk of the film concerns Olive trying to get Verena to promise not to marry while Basil keeps showing up, telling her that he wants to marry her, and that if he does, he’ll more or less prevent her from being in public at all. And Verena, despite her dedication to the movement and the attentions of young Herny Burrage (John Van Ness Philip), encouraged by his mother (the always-wonderful Nancy Marchand), Verena seems to be swayed by Basil’s charms.

The Bostonians is one of those films that becomes very frustrating to me in part because of how good the cast is. In addition to those I’ve already mentioned, the cast includes Jessica Tandy as an older suffragette and the always interesting Linda Hunt as a doctor who doesn’t get involved with the women’s movement but seems to exist tangentially in the same social circles.

I want to talk a little bit about Christopher Reeve in this as well. Reeve is, of course, best known for playing Superman in the 1970s and for an accident that paralyzed him. It’s easy to forget that Reeve was a talented actor who had a career outside of playing Clark Kent. I’m not sure I completely buy his Mississippi accent, but it’s fun to see him in a role like this one.

The Bostonians breaks two cardinal rules for me when it comes to a movie. The first is that it’s dull as all hell. This is a movie where the romance is tamed down to the point where an embrace is the pinnacle of commitment. There’s a lot of talking and a lot of reading aloud and a lot of referencing early women’s movement figures, but not a lot actually happens. Worse, there is no believable chemistry between Basil and Verena. There’s plenty between Verena and Olive, but there’s literally nothing that would make Basil and Verena a couple.

And this leads me to the second problem here. The romance simply doesn’t work. We’re supposed to believe that Verena is absolutely head-over-heels for Basil when they literally have nothing in common. In fact, Basil’s entire existence seems to be about negating that of Olive, Verena, and any other woman who wants anything like equality. He is the epitome of everything she stands against—he tells her that he wants to marry her and effectively lock her away and keep her entirely to himself, working against everything she has ever worked for and against her entire movement. In fact, should he marry her, it would effectively undo everything she has done—her giving in to someone who so completely hates everything she stands for.

Vanessa Redgrave is fine in this. She’s a bit overwrought and constantly emotional, especially when considering anything having to do with Verena. But she’s fine. The role feels more supporting, but I honestly can’t be that worked up to care too much.

At least I don’t have to watch this again.

Why to watch The Bostonians: History?
Why not to watch: Dull, and the romance doesn’t work.