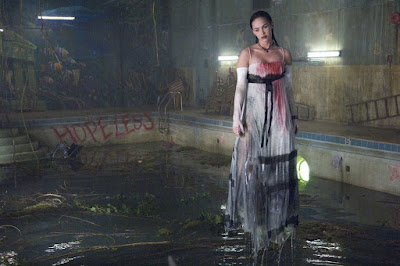 I went into Jennifer’s Body without a great deal of knowledge. I knew that it starred Megan Fox, best known for saying Michael Bay was just like Hitler and then working with him again. I didn’t know it also starred Amanda Seyfried, an actress of whom I’ve never been that fond. I also knew that this is a movie that has mixed reviews. I’ve seen more than one person list it as a guilty pleasure or suggest that by saying they like it they are putting themselves out on some limb or another.

Jennifer’s Body is a member of that large subset of horror movies that takes place in and around high school students. Most or many films of this stripe end up being slashers, and Jennifer’s Body is very much not a slasher. This is because in addition to being a high school horror movie, this is also one of that much rarer breed of film: a feminist horror film, or at least one that can easily be read has having a feminist storyline.

We begin in a mental institution where we meet Anita “Needy” Lesnicki (Amanda Seyfried), who has been locked up for some time and has earned a reputation with the orderlies as a kicker. We even get a taste of that and see her tossed into the institution’s equivalent of solitary confinement, which is where she’ll tell us her story. That story is naturally going to involve our title character, Jennifer Check (Megan Fox). We learn that she and Jennifer have been best friends for most of their lives despite being completely different. Where Needy is quiet and studious, Jennifer is a cheerleader and the sort of girl who has learned exactly what her looks can get her.

One night, Jennifer drags Needy off to a concert of a new indie band. While there, Needy overhears the band members talking about Jennifer. Then, when the concert starts, a fire starts as well. The entire club is engulfed in flames and Needy and Jennifer escape through a bathroom window. Outside, the band members more or less kidnap Jennifer and drive off with her. Later that night, Jennifer shows up in Needy’s house covered in blood and vomiting something horrible. And while Needy is overwhelmed by what has happened, both the carnage of the fire and what has evidently happened to Jennifer, the next day in school, Jennifer appears fine.

Eventually, we learn exactly what has happened. The band decided that they were tired of being nobodies, so they found a ritual they could use to sacrifice someone to Satan. The problem is that they needed that sacrifice to be a virgin, and Jennifer was anything but. So, while the sacrifice works after a fashion (the band is touted as acting heroically in the fire and gain a great deal of national exposure), Jennifer doesn’t die but becomes possessed by, for lack of a better way to put it, a succubus. Now, the only way she can survive is by luring men into her clutches and slaughtering them, something that happens a few times over the course of the film.

So, naturally, the film becomes about Needy trying to stop her friend, who seems prepared to consume virtually every guy she comes across, including Chip (Johnny Simmons), Needy’s boyfriend. Needy attempts to Chip about staying away from the upcoming dance because it will be an all-you-can-eat buffet for the demon-possessed Jennifer, but of course he doesn’t listen. And this is going to take us to the third act and all of the fun confrontations we’re going to have.

What I find fascinating about Jennifer’s Body is the cast. In addition to Fox (whose career more or less is what it is) and Seyfried (who’s had a very nice career regardless of my misgivings about her), Jennifer’s Body has J.K. Simmons as a high school teacher who inexplicably is missing an arm and has Amy Sedaris as Needy’s mother. There’s also a short scene or two with Chris Pratt as a trainee in the local police force.

So here’s the thing about Jennifer’s Body: I like it a little less than it deserves for one very specific reason. That reason is that I don’t love Diablo Cody’s writing style. I had exactly the same problem with Juno. The problem is that Cody is a very smart person and because of that, she doesn’t know how to write any dumb ones. All of her characters are far too smart to be teens, which was exactly the problem I have with Juno. It feels like there is such a desire to be clever that it supersedes anything else.

And it’s kind of a shame, because Cody does a lot of other things well as a writer. For instance, there is a surprisingly wholesome, even cute sex scene between Needy and Chip (although it does turn dark by the end) that doesn’t have the sort of consequences sex often does in horror movies. I rather appreciated that. I just get tired of the too-clever dialogue.

I liked Jennifer’s Body but a little less than I wanted to. I was hoping for something closer in tone to Ginger Snaps, and while Jennifer’s Body is a lot of things, it certainly isn’t that.

Why to watch Jennifer’s Body: There really isn’t a lot of feminist horror.
Why not to watch: The issues that exist with Juno exist to some extent in this screenplay as well.