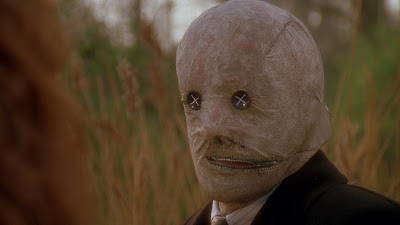 There was a short period of time in my life when I was a comic book collector. I didn’t collect for too long, but my collection years included 1990. I remember a huge marketing campaign for Nightbreed that involved multipage inserts. I worked in the magazine industry for about five years, and I can tell you that those inserts don’t come cheap. I think there was a lot of effort to get the same sort of support for Nightbreed that existed for Hellraiser. In real ways, this wants to do the same thing.

See, here’s the reality of Nightbreed: it desperately wants to create a mythology. This is something that Hellraiser did, almost by accident. So much of Hellraiser is about bringing Uncle Frank back to life and the Cenobites don’t appear right away. Despite this, they became the central focus of the fandom of the film. Pinhead and his compatriots soon had a mythology surrounding them. Nightbreed, based on Clive Barker’s novella “Cabal,” really wanted to create the same sort of mythology around the creatures living in Midian. The problem is that there’s not enough time spend on that and far too many creatures to create much of anything.

Anyway, Aaron Boone (lantern-jawed Craig Sheffer) is plagued by dreams of a place called Midian, something he frequently confesses to his psychiatrist, Decker (David Cronenberg. Yes, the director). Meanwhile, we see a horror-masked killer slaughter a family. Decker more or less tells Boone that he is responsible for the deaths, and gives Boone 24 hours to turn himself in. He also drugs him, and Boone winds up in the hospital where he meets Narcisse (Hugh Ross), another person desperate to find Midian. Convinced that Boone can take him there, Narcisse discusses out to get to Midian, then—to prove that he deserves to go—slices off his own face.

So Boone leaves and goes to Midian. It turns out that Midian is a cemetery, and that there are weird creatures who live there, including slicey-faced Narcisse. One of them attempts to kill and eat Boone, biting him, but Boone escapes, only to be gunned down by the police. That bite eventually brings him back to life, though, and he returns to Midian where he is entered into the group of creatures who live there. So Boone is sort of alive and sort of undead and is evidently one of these creatures despite these creatures being ancient races that have been forced into hiding.

So, while none of that really makes sense, it would be interesting to a point. Decker, for whatever reason, wants to go to Midian and kill everything there. Also desperate to get to Midian is Boone’s girlfriend Lori (Anne Bobby). And really, this is kind of where I start to lose the plot. What follows is one of the dumbest, most nonsensical third acts in film history.

There are a few positives in Nightbreed. First, the horror mask that the serial killer wears is absolutely terrifying (see the picture up top). Second, this movie is an absolute fiesta of solid practical effects. I love practical effects, particularly in horror movies, and this is great for them as well as horror makeup.

But pretty much everything else is a straight failure. What Nightbreed wants to do is make these creatures that live in Midian the violent-but-less-evil equivalent of the Cenobites. The issue with that is that there are just too damn many of them. One reason the Cenobite mythology worked is that there were only four of them in the first two movies. There are hundreds of creatures living in Midian and all of them appear to be different. So little time is spent addressing them that most of them don’t even have names.

For instance, there is a female Midianite named Shuna Sassi (Christine McCorkendale) who has animalistic features and is covered in quills. We learn her name because it’s mentioned once and we see her use her quills at the end of the movie…and that’s it. That’s her entire presence in the film. Is she the only quill-covered Midianite? Is she a separate breed of creature from the others? Does she have other abilities? No clue. We learn at one point that the different breeds (so they may all be different types of creatures) have different weaknesses. Some are killed by sunlight. Others can be gunned down or killed by fire. But as the third act winds on, it sure seems like a lot of them can be killed by bullets.

What Nightbreed needed was both more and less. It needed less plot and a third act that didn’t try to turn this into an action movie. It needed a lot more exposition and world building. If this had given us a way for Boone to become one of the Midianites and create some of the actual mythology that the movie wants to make, it would have worked. Instead, we have a bunch of nonsense about a crazed killer and a third act that plays like a bunch of Canadian rednecks going on a turkey shoot.

It’s a damn shame, because there is a mythology to create here. But we’re given so little that it’s not worth caring about. If you need to watch this, watch it for David Cronenberg’s off-the-wall performance, but don’t expect much more than that.

Why to watch Nightbreed: Clive Barker writes inventive horror.
Why not to watch: It fails at what it most wants to do.