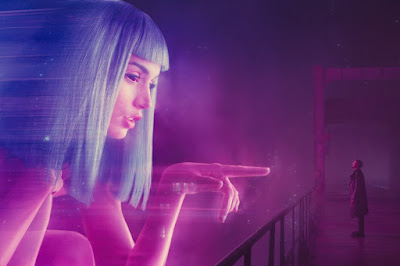 I was initially interested to see Blade Runner 2049 as a continuation of a sort of the original film. The original film is set in 2019, so this would be the same universe thirty years on. The first film was one of those that became important and influential over time. The original theatrical release was pretty substandard and completely eclipsed by E.T. released in the same month. Now it’s a genuine classic and a film that is absolutely required viewing. The sequel could be the same. And then I got a look at the running time.

Seriously? 164 minutes? Even with the most generous credit sequence I could imagine, that’s a good 30 minutes longer than I expected.

I’ll make plot run-through as quick as possible here. Blade Runner 2049 is a continuation of the universe in question, but not specifically of the same characters. Oh, Rick Deckard (Harrison Ford) is going to show up eventually, but for the most part, this is going to be an entirely new set of characters. As the story begins, we learn that the Tyrell Corporation went under because of the continued problem with replicants—artificial humans. Later models didn’t have the programmed short life span, which made them even more dangerous than the more standard replicants. The company went under, but came back with new technology that made the new replicants more tractable.

We’re going to spend most of the movie with one of those new, more tractable replicants, K (Ryan Gosling). It seems that there are still older model replicants out in the world hiding among humanity. Newer models like K are sent out to “retire” them. K is sent to investigate someone called Sapper Morton (Dave Bautista), and a fight ensues that ends with Sapper Morton being killed. On his way back home, K discovers something buried under a dead tree.

What’s buried turns out to be a skeleton in a box. That skeleton, it is determined, died during childbirth. Much more important is that the woman in question has serial numbers in her bones—she was a replicant, and thus allegedly incapable of reproduction. A little detective work and we learn that the skeleton belonged to Rachel from the first film, thus implying that the father might well be Rick Deckard. K’s boss Lt. Joshi (Robin Wright) wants him to track down the child and retire it, since the idea that replicants can reproduce might well start a revolution. At the same time the new owner of Tyrell, Niander Wallace (Jared Leto) wants to child and sends his replicate assistant/assassin Luv (Sylvia Hoeks) to track down the child as well. K’s path will lead him through his own past, a memory creator named Dr. Ana Stelline (Carla Juri), and to a group of replicants lead by a woman named Freysa (Hiam Abbass). And in all of this, K is assisted by his virtual girlfriend Joi (Ana de Armas).

So here’s the thing: I was right to be wary of this based on the running time. While there is a lot here, it feels like this could stand a good trimming down to be something much more reasonable in length. There’s no reason his needed to be longer than 135 minutes, and 120 is probably closer to the ideal running time for this story.

One thing that does work for me, at least on paper, is the change in genre. Oh, don’t get me wrong--Blade Runner 2049 is very much a science fiction film, but beyond that, it’s a completely different movie. The original is very much a film noir in a lot of respects. Blade Runner 2049 is really not. There’s a mystery here to be solved, but it’s much more of a standard mystery movie than it is a modernized entry into the noir style.

As such, it’s not bad, but it’s also not great, and a big part of that is the ridiculous running time. It also manages to give up on a lot of the spectacular visuals that made Blade Runner such a classic. There are still some that work, but frequently we’re given blasted landscapes with little or nothing on the horizon. I’m not saying that the film isn’t filmed well; It was nice to see Roger Deakins finally win an Oscar for this.

But a lot of the world building is gone. One of the reasons Blade Runner remained so vibrant and important as a film is that it feels like it takes place in a fully-realized world. This sequel gets rid of a great deal of that in favor of, well, story and details. Losing the world building for the sake of a mystery seems like a poor trade, and that right there is going to be how I tend to remember Blade Runner 2047.

Why to watch Blade Runner 2049The original is one of the greats of the genre.
Why not to watch: 164 minutes?! Really?!