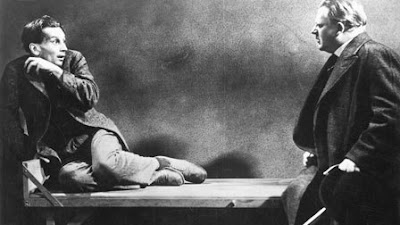 When I was doing the 1001 Movies list, one of the more unpleasant slogs was the epic serial Les Vampires. While the 10-part serial is considered incredibly influential, it suffers from all of the problems of silent films for a modern audience splayed out over the course of 400 minutes. But there were some ideas there; the audience just had to dig for them through something that was far too long and contained far too much filler. Fritz Lang’s The Testament of Dr. Mabuse (Das Testament des Dr. Mabuse if you prefer the German articles) is a distillation of the good ideas in Les Vampires placed in a single film.

Kind of. After all, The Testament of Dr. Mabuse is a sequel to Dr. Mabuse the Gambler. We pick up about ten years after the original film with the title character (Rudolph Klein-Rogge) locked away in an insane asylum. Treated by Professor Baum (Oscar Beregi), Mabuse spends his days writing endlessly, creating new and diabolical criminal plans designed to unleash a massive crime wave around the world. It is Mabuse’s belief that what the world needs is a constant threat of terrible, senseless crime to keep people terrified and docile. In D&D terms, Mabuse is the epitome of chaotic evil.

We start with a disgraced detective named Hofmeister (Karl Meixner) who puts in a frantic call to his former friend and colleague Inspector Lohmann (Otto Wernicke). Eventually, he makes it understood that he was doing his job the whole time, and that he’s finally tracked down the source of some of the crimes that have been plaguing the area. Before he can fully spill the beans, though, The lights go out and there are some shots. Hofmeister has disappeared, only to eventually turn up driven mostly insane.

Meanwhile, one of the henchmen of the new crime boss is a guy named Thomas Kent (Gustav Diesel). Tom wants out of the rackets, but he knows that a single misstep will get him killed because the current boss brooks no excuses or failures. Part of this is his own conscience; he did time for murder and is now morally opposed to it. The other reason is Lilli (Wera Liessem), with whom he has fallen in love. He needs to get out for her sake, but doesn’t know what to do.

The upshot of all of this is that the various criminal schemes that have Lohmann and his team running around all appear to have been taken directly from the notes of the insane Dr. Mabuse. However, Mabuse dies in the middle of the film. Does this mean that he is controlling a criminal empire from beyond the grave? Or has someone stepped in to take his place and work through his nefarious schemes to destroy society?

The only reason that I have The Testament of Dr. Mabuse listed as a horror movie is because it’s on a horror movie list. This isn’t really a horror movie despite the presence of a spectral Dr. Mabuse in several moments serving as a sort of spirit guide or threatening presence. We’re never really told if that presence is real or imagined, but it’s the closest thing to a traditional horror element that the film contains. Otherwise, this is pretty much a straightforward gangster film, the sort that would appear to be an early influence on the style that would turn into film noir.

The biggest problem of the film is that it has suffered terribly from time and being copied. The big surprise moment when we find out exactly what is going on probably worked and worked well for audiences in the early 1930s. Today, after hundreds of imitators and thousands of crime/noir/suspense films have been made, the answer to the mystery isn’t that difficult to figure out roughly halfway through the film. If you’re surprised by it, you either need to pay better attention or watch more movies in this genre.

Still, it’s got its good points. A lot of the characters come across as flat, but that’s not too surprising. There are some interesting quirks available, though, and these do make at least some of the characters memorable. The two that most stand out are Hofmeister and Lohmann. Hofmeister, once his mind snaps, sings loudly whenever he feels threatened. Lohmann has a penchant for cigars, which he smokes in a huge version of a cigarette holder. That’s difficult to forget.

Ultimately, this is a film that has not aged well, but that’s not the fault of the film. It’s very good for what it is, aided ably by the solid and inventive direction of Fritz Lang. if you are interested in proto-noir films, you probably do have to sit down with Les Vampires at some point, but you’ll find this one faster, more interesting, and much more palatable, even if it could stand to lose 20-30 minutes of its running time.

Why to watch The Testament of Dr. Mabuse: It’s what Les Vampires should have been.
Why not to watch: It’s still a bit longer than it needs to be.