You've Seen This Before 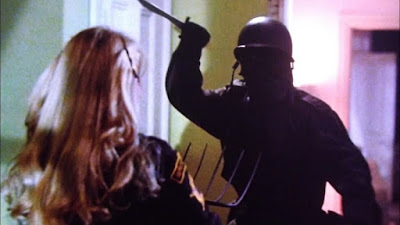 I’m not a huge fan of the slasher subgenre. I mean, I recognize that there are some classics that are worth watching, but slashers are at least potentially the most brain-dead part of the genre. All you need to make a slasher is a backstory to give you a maniac and a series of dumb teenagers (usually) to walk in front of the blade. Slashers don’t get points for cool camera work or for interesting plots. The only thing that distinguishes one slasher from the next is the amount of blood and the inventiveness of the kills. Yes, there are exceptions. The Prowler is absolutely not one of those exceptions.

We’re going to start with the tragic backstory that leads us to the twisted murderer. In the waning days of World War II, a young woman named Rosemary sends a Dear John letter to her unnamed boyfriend. A few months later, Rosemary is out with her new boyfriend at a college dance when the two of them are murdered with a sharpened pitchfork. We get to see that the killer was dressed in full WWII military regalia. We also get to see that the killer leaves behind a single rose, almost certainly for Rosemary. It would seem that anyone with half a brain would suspect Rosemary’s jilted boyfriend, but evidently that never happens (and we’re not told his identity) and the murder is somehow unsolved.

Fast-forward to the film’s present, which is roughly 1980. The dance at the local college is going to be back on for the first time since 1945 and the murder of Rosemary and her boyfriend. You knew this, right? That the dance would immediately be cancelled forever until it was time to bring it back, which is going to also bring back the killer to murder teens going to the dance because reasons.

Central to the town, at least in theory is Major Chatham (Lawrence Tierney), who is the long-suffering father of the murdered Rosemary. It’s through Chatham’s influence that the dance has been cancelled for 35 years. As the preparations for the dance are finalized, the town sheriff (Farley Granger) is heading out for his yearly fishing trip, turning over the reins to his deputy, Mark London (Christopher Goutman). Markis dating one of the college girls prepping for the night’s festivities. He promises Pam (Vicky Dawson) he’ll be at the dance eventually.

Honestly, the other characters do have names here, but I’m hard pressed to remember what they are or care about the fact that they’re nothing more than fodder for the end of a pitchfork. Pam, who looks about 10 years younger than her actual age somehow, is obviously set up as our final girl. She’s the one who survives her first encounter with the killer and thus is able to warn everyone else about what is happening. This warning, of course, comes too late for some and doesn’t stop others from wandering away from the dance for sex. Anyone versed in even the smallest amount of slasher lore knows that sex = death in slasher world.

What The Prowler does well is the kills. These are really bloody and explicit. In fact, the original version of this film had a full minute of murder sequences excised from it when it was exported to the UK. The gore (thanks to Tom Savini) is so explicit that in Germany all of the gore was removed, which included removing the identity of the killer. That seems ridiculous, but it honestly kind of isn’t.

What I mean by that is that there is clearly only one possible identity for the killer. We’re given exactly one person who is old enough to have been the original killer, so, Scooby Doo-like, the only person the killer can be is the one named person who could actually fulfill the identity of that person. And, since The Prowler doesn’t really want to think, that’s who the killer is.

Worse, for something as essentially plotless as The Prowler is, there are plot holes that are left open for no reason. Major Chatham shows up at one point, and the conclusion happens in his house, but for some reason, he’s nowhere to be found. There’s a moment when he grabs onto Pam’s hand as she runs from the killer—demonstrating that he’s not the killer, assuming the fact that he’s in a wheelchair wasn’t enough—and then he’s just dropped as a character and plot element. What the hell was the point?

So, the kills are brutal and pretty good, but nothing else here is noteworthy. If you can’t figure out the identity of the killer while watching this, you should probably look for an easier genre to understand than slashers…if there is one.

Why to watch The Prowler: This is how bloody a slasher should be.
Why not to watch: As is typical with slashers, everyone is dumb.