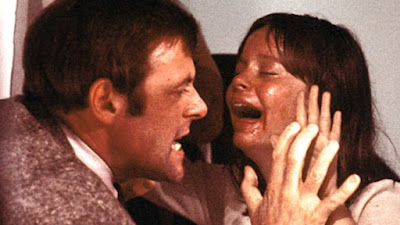 It seems like a year since I’ve posted something (and it has been almost two weeks). Daughter’s graduation and last show with her dance school, preparation for college, end of term for me, and a death in the family will do that. It honestly feels like more than a week since I’ve even watched a movie. When life spirals out of control, entertainment and hobbies are the first things to drop off. This hasn’t changed the fact that there is a stack of movies to my immediate right. Now that things are starting to calm down, it’s time to get to them. The one movie from interlibrary loan seemed like a good place to start, thus this review of Audrey Rose.

I remember vaguely when the book Audrey Rose was published only because one of my sisters was intensely weird about it. The basic story is that a little girl named Audrey Rose dies in a car accident and is immediately reincarnated into the body of another girl. Audrey’s father searches for the new vessel of his daughter’s soul and eventually finds her. That’s pretty much the story of the movie as well, just with added Anthony Hopkins and Marsha Mason.

Honestly, that paragraph above is essentially the entire plot of Audrey Rose. The accident that kills Audrey is 11 years in the past of the movie’s present. We’re going to start with the Templeton family, father Bill (John Beck, looking exactly like he did as Moonpie in Rollerball), mother Janice (Mason), and daughter Ivy (Susan Swift). Their lives seem completely normal, aside from the fact that they start noticing the presence of a strange man on public transportation, at Bill’s job, and (most disturbingly) outside of Ivy’s school.

That man is Elliot Hoover (Hopkins), the grieving father of Audrey Rose. He eventually confronts the Templetons with what he thinks is going on, and Janice, initially skeptical and a bit terrified of Hoover, starts to buy into his story when she realizes that Ivy has bizarre, inexplicable nightmares every year around her birthday—which coincides with Audrey Rose’s violent death. Hoover takes his encounters with a few psychics as evidence for his case, but Bill—presented here as a skeptical atheist, and thus not trustworthy in 1970s Hollywood, finds that to be more than a bridge too far. But more and more things start to demonstrate Hoover’s beliefs as reality, not the least of which is his ability to calm down Ivy during her nightmares by using the name of his dead daughter.

Eventually, Hoover kidnaps Ivy, kind of, which leads to a big ol’ show trial, which is how the movie spends the third act. I honestly wasn’t expecting this to end in a courtroom drama with John Hillerman in the role of the Templetons’ attorney.

Where Audrey Rose fails is in the scare department. The trailer is relatively creepy, helped a great deal by the disturbing cover art for the book. And the trailer is far more upsetting and disturbing than the film could ever hope to be. There’s one really good creepy moment—Ivy is spending a night in a hotel with her mother. Janice awakens and finds Ivy standing in the bathroom, looking at herself in the mirror, and more or less asking for Audrey Rose to come out, a la Candyman. It’s a great moment in a movie that really could have used more of them.

My biggest issue with Audrey Rose is the casting of Marsha Mason. As I’ve said a number of times on this blog, I’m not a fan. There are a number of actors who I have learned to love by watching them over and over. Believe it or not, if you go back far enough, you can find a post where I wonder why everyone seems so blown away by Bette Davis, who is now one of my favorite all-time actresses. I’ve warmed to Renee Zellwegger and I have a much nicer opinion of Keanu Reeves and Clive Owen. Marsha Mason, though, I still don’t like. I can’t think of a movie (Cinderella Liberty…maybe…, and she’s better than James Caan in Chapter Two) where I wouldn’t want someone else in the role. She immediately pulls me out of any movie I see her in, and it doesn’t help that in Audrey Rose she spends a lot of time crying or looking like she’s about to cry.

Audrey Rose is fine. It’s billed as a horror movie, but is one only tangentially, and only because it deals with reincarnation. It’s a lot closer to a drama with elements of magical realism than anything else, so it’s a disappointment in that respect. I can’t imagine needing to watch this a second time.

Why to watch Audrey Rose: It feels like a very different plot than seems typical for horror.
Why not to watch: Marsha Mason is the best you could get?