Film: Village of the Damned (1995)
Format: DVD from Lasalle Public Library through interlibrary loan on the new portable. 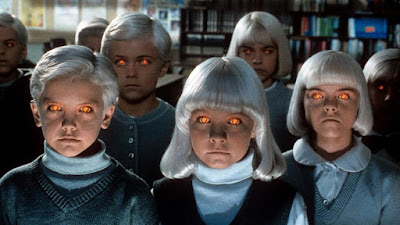 Of the horror directors whose surame start with C, John Carpenter clearly has the highest highs. I love Wes Craven dearly, but it’s hard to compete with The Thing and Halloween. Carpenter probably has the lowest lows, though, as films like Ghosts of Mars and Escape from L.A. will attest. His 1995 remake of Village of the Damned (sometimes referred to with his name before the title as John Carpenter’s Village of the Damned) falls between those two extremes. Sad to say, it’s very much on the lower end. Village of the Damned was certainly due for an update (and probably is again), but this wasn’t the update that was needed, fleshed out from the original as it is. The hope that Carpenter could find lightening in a bottle a second time with a remake was unwarranted, sadly.

As it happens, this is also the final theatrical release featuring Christopher Reeve before the accident that left him paralyzed. Reeve struggled a bit with typecasting after his stint as the Man of Steel, so this movie may well have been a further effort on his part to step away from that image.

On the off chance that you don’t know the original story, here it is in a nutshell. One day, everyone in the small town of Midwich, California falls into a strange sleep. The borders of the area of effect are very clearly delineated; stepping inside the affected area knocks someone out immediately, and they come to if pulled out. When the effect passes, it is discovered that ten women in the town are pregnant, include at least one virgin and at least one woman who has not “been with” her husband in more than a year. All of this is confirmed by the town doctor, Alan Chaffee (Reeve).

As might be expected, the resulting children are…unnatural. They are cold and emotionless, and all look identical—blue eyes, platinum blonde hair, and razor-sharp intelligence. Only nine of the children survive, though; one of the girls (there are five of each) is stillborn. That stillborn child is snatched away by Dr. Susan Verner (Kirstie Alley). As the children grow up, more and more is learned about them. They appear to be able to read the minds of anyone around them. They can also implant thoughts and ideas into the heads of others and use this to eliminate anyone who they think might threaten them or that has threatening thoughts against them. Barbara Chaffee (Karen Kahn), the birth mother of the leader Mara (Lindsey Haun), is forced to commit suicide, for instance.

Over time, we learn through Dr. Vermer that the children are (no surprise) aliens. She is aware of this thanks to her research on the stillborn baby. She also informs Dr. Chaffee that the mind reading abilities of the children can be blocked by thinking of a specific image to block them. Meanwhile, we also learn that there were other communities that experienced blackouts and pregnancies. Of those, Midwich is the only one that is still intact. All of the others have been wiped off the map.

Of course this is an alien invasion. Of course the kids are emotionless (aside from one—the child who would have been paired with the stillborn baby). This is about world domination. The kids are also keenly aware that the other colonies have been destroyed and that they are next. They demand that Dr. Chaffee find a way to remove them before the town is destroyed so that they can continue their quest for world dominance while Chaffee struggles against his need to destroy them before they take over the world.

The original Village of the Damned was very short and intense. There are a lot of elements added here that were not included. We don’t have the scientist experimenting on a stillborn child, for instance. We don’t have the detailed deaths of townspeople (including Meredith Sallinger, Buck Flowers, and Mark Hamill) in the original. The deaths add some nice padding to the film, but not really a great deal of content. In fact, Mark Hamill as the local priest is the only real addition here that I like, because he offers a very different perspective on what is happening in the town.

I’m not sure why this version doesn’t work as well as the original. The cast is substantially better and the story is a lot more involved. It’s just…not very good. There’s no sense of time passage, for starters. We have kids that are born and before you can refill your popcorn, they’re seven or eight. Did they age fast? Did seven or eight years pass? We don’t know and the movie can’t be bothered to tell us.

As much as I hate to say this, Village of the Damned commits the worst of sins in the movie word: it’s lazy. There’s a good movie here, and a good remake to be made of it. It’s just not this remake.

Why to watch Village of the Damned (1995): You owe it to Christopher Reeve.
Why not to watch: It’s a substandard version of the story despite being longer and more detailed.