Film: The People Under the Stairs
Format: DVD from Ida Public Library through interlibrary loan on the new portable. 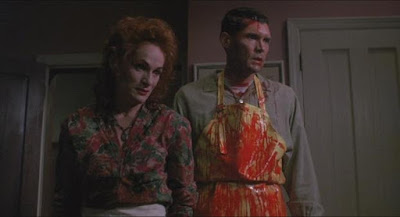 When the conversation turns to horror directors, everyone is going to have their favorite. George Romero is going to be a popular choice just because of his creation of a massively influential subgenre. David Cronenberg, king of body horror, will have his adherents, who will in part point to his success outside of the genre. John Carpenter, by virtue of Halloween and The Thing probably has the highest highs, but he’s got some real lows as well. My favorite, though, will always be Wes Craven. As much as I love Carpenter and Cronenberg, and as much as there are some real weak points in Craven’s filmography, there’s a lot there to indicate just how good he really was. I’m catching up on a lot of his back catalog, which is why I finally watched The People Under the Stairs.

Aside from a couple of the Nightmare films, this was probably the biggest hole in my Craven viewing history. It’s a little hard to place in the Craven pantheon of films for me. Is it a horror movie? Is it a comedy? Is it an adventure just like The Goonies had? It’s kind of all of the above wrapped into a single package. It’s also fairly unusual in the sense that our protagonist is a 13-year-old African-American kid named Poindexter, who goes by Fool (Brandon Quintin Adams). Fool has some elements of stereotype in his character, which seems to be a product of race, the year of production, and the genre. Regardless of this, He very quickly became one of my favorite horror protagonists.

Fool’s sister Ruby (Kelly Jo Minter) is into tarot readings, so we start the movie with a tarot reading that will naturally lay out the plot in tarot terms. The important information is that Fool, Ruby, and their cancer-ridden mother are about to be evicted. As it happens, the people ready to put them on the street are doing so because the family is the last one still in their building, and the owners want to put up expensive office buildings. And, we learn from friend Leroy (Ving Rhames), the couple are absolutely wealthy beyond all recognition, and ripe to have things stolen from them. And thus Fool is recruited into the robbery in order to save the family home.

What we learn about those rich people is, of course, the plot. They call each other Mommy (Wendy Robie) and Daddy (Everett McGill), and they have a child named Alice (A.J. Langer) roughly Fool’s age. And then, of course, there are the people under the stairs. This is, more or less, a cabal of cannibals that were once upon a time kidnapped by Mommy and Daddy and, when they broke one of the commandments of the uber-religious “parents,” have been banished to the basement where they become cannibals kept alive by being fed anyone who comes to the house—delivery people, meter readers, etc. And eventually we discover that Mommy and Daddy are actually brother and sister, and we’re also treated to Daddy roaming through the house hunting for intruders while wearing a head-to-toe gimp suit. And, just to throw in some additional fun, there’s Roach (Sean Whalen), once condemned to the basement with his tongue cut out who has since escaped to live in the walls of the giant house.

And, that’s really all you need to know to see where this is going. You know exactly what this is going to be. This really is, in very large part, The Goonies with just Fool, Roach, and Alice as the kids and with all of the people under the stairs eventually becoming, essentially a sort of collective Sloth. It really is just Fool eventually trying to rescue Alice and trying not to get shot by gimp-suited Daddy.

And so, it’s actually a difficult movie to pigeonhole in any real way. It’s an adventure movie in a lot of respects, the sort of thing that I grew up on. But it really is a horror movie in a lot of ways. The Goonies probably isn’t the best comparison. It’s a lot closer to being The Lost Boys if it just featured the Frog Brothers.

And, as such, it’s a lot of fun. It’s not a great movie, but it’s a fun one. While it feels like it would be perfectly PG-13 with a few minor adjustments and it’s not really scary aside from a moment or two (and most of those aren’t much past PG-13, either), I enjoyed watching it. It’s kind of a shame that it really didn’t work a way to have a sequel in it, because Fool is one of my new favorite horror movie characters.

Why to watch The People Under the Stairs: Fool will become one of your favorite horror movie protagonists.
Why not to watch: Everett McGill in a full gimp suit.

Email ThisBlogThis!Share to TwitterShare to FacebookShare to Pinterest
Labels: comedy, horror, The People Under the Stairs, Wes Craven