What Does it Profit a Man... 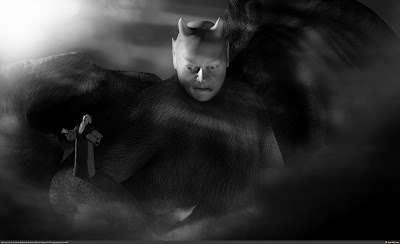 Faust is one of those stories that, much like Robin Hood, everyone knows, at least in the broadest of strokes but that pretty much no one has read. At the very least, I don’t think I know anyone who has read Faust (cue my comments filling up with people who have read it. Good on you if you have). It is the classic “deal with the devil” tale, though, so everyone seems to have a passing knowledge of the basic story. The 1926 version of the story directed by F.W. Murnau is probably the definitive film version, although there are certainly others. But this is a classic, crafted by one of the true masters of silent cinema. Sure, Fritz Lang could spin a tale with the best, but F.W. Murnau truly was a master.

We begin the tale much as we would were this the story of Job. The demon Mephisto (Emil Jannings) and an archangel (Werner Fuetterer) make a bet with each other over the fate of the world. Faust (Gosta Ekman) is a true man of science and religion despite his dabbling in alchemy. The archangel agrees that if Mephisto can turn him away from God and corrupt him, he will be given dominion over the Earth.

In the classic tale, Faust realizes at the end of his life that he is bored as a scholar. He calls out to the devil for magical powers and knowledge and the ability to indulge in the pleasures of the world. In this version, Mephisto starts a plague, which causes Faust to reach out to darker powers for the ability to help all of the suffering. Mephisto offers him a deal, naturally for his soul, which Faust rejects. Mephisto then offers a second deal—the ability to help (with Mephisto’s magical aid) for a day at which point the entire deal can be reneged. To this Faust agrees, and while he initially helps the people around him, when they realize that he can’t bear the sight of a crucifix, they turn against him. To protect his investment, Mephisto shows him a vision of the most beautiful woman in Italy (Hanna Ralph), and uses his magic to whisk Faust to her side, and also restores his youth. And while the newly-young Faust is romancing her, time runs out. Faust makes the decision to stick with his youth and looks, signing over his soul to Mephisto for eternity.

You can almost certainly guess where we’re going to go with this, can’t you? Faust enjoys the pleasures of the world with Mephisto providing all of the magical help that is required. And, predictably, after however many years of debauchery, Faust decides that he has tired of all of those pleasures of the world and wants to go home. And home they go, where Faust encounters Gretchen (Camilla Horn), and he immediately falls in love with her despite Mephisto attempting to persuade him with more…pliable…women. And, naturally, things eventually go bad thanks to Mephisto’s influence since he has never been Faust’s friend and wants to collect his soul.

Faust is a pretty simple story at its heart, and it honestly probably doesn’t need to be almost two hours long, but Murnau makes it work. Murnau is one of the two reasons that Faust is worth watching. Murnau was always an exceptional stylist, one of the greatest practitioners of the German Expressionist style. If you’ve spent any time watching Nosferatu, you’ll be able to immediately identify that this is his work.

The second reason to watch Faust is the grinning performance of Emil Jannings. There’s a great deal of joy in watching someone really dive into playing a truly evil character, and Jannings makes a meal of this role. He’s clearly having a lot of fun, as much fun as Walter Huston did in The Devil and Daniel Webster, and he’s doing this without being able to use his voice. Had the Oscars been around a year earlier, Jannings would have absolutely been in the mix for Best Actor. Say what you want about Jannings in real life—his pro-Nazi propaganda film work, for instance—the man could absolutely devour a role when given that chance.

I’ve long been of the opinion that silent dramas don’t really hold up that well. They’re so stylized and melodramatic that they don’t really translate to the modern world. Silent comedies are still funny; a guy falling on his ass is still a guy falling on his ass whether you hear it or not. Horror movies fall in between. Good horror still works. Faust isn’t that scary, but most of it still works really well.

Why to watch Faust: It is one of the truly classic tales of world literature.
Why not to watch: If you’re the type who doesn’t like silent movies, this one won’t convince you to like them.