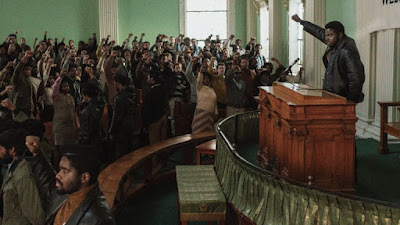 Today, Derek Chauvin was sentenced to 22 ½ years in prison for the murder of George Floyd. Frankly, that’s twice as long as I thought he’d get and about five times less than I think he deserved. It makes tonight’s viewing of Judas and the Black Messiah particularly poignant. Fifty, sixty years ago, Chauvin doesn’t get convicted, so in that respect, perhaps we’ve moved a little forward. But George Floyd is still dead, so maybe we haven’t moved that far.

Judas and the Black Messiah is about the life and death of Fred Hampton (Daniel Kaluuya), the 21-year-old deputy chairman of the Illinois Black Panther Party who was gunned down in his bed by Chicago police the night before he was to go to prison on bogus theft charges. It’s also about Bill O’Neal (LaKeith Stanfield), the man who was turned into an FBI asset and was used to take down Hampton.

We start more or less introduced to O’Neal as he tries to steal a car. O’Neal’s scam is to pretend to be a cop with a fake badge and accuse someone of having a stolen car that he then “repossesses” as he drives away. In this case, he’s busted and is turned over not to the Chicago police, but to Roy Mitchell (Jesse Plemons) of the FBI. Plemons, working under orders from J. Edgar Hoover (Martin Sheen), gives O’Neal a deal. His choices are to do half a dozen years for grand theft auto and impersonating an officer, or to infiltrate the Black Panther Party and keep tabs on Fred Hampton.

Meanwhile, Fred Hampton is organizing. He’s using the power of the Illinois BPP to feed kids. He holds rallies. More importantly, he reaches out to other communities with his message. Hampton reaches out to Black gangs, but also Hispanics and even groups of racist white folks with the message that, because they are all poor, they have more to unite them than to divide them. Meanwhile, Hampton romances recruit Deborah Johnson (Dominique Fishback) who eventually becomes pregnant. Bill O’Neal seems to be coming under Hampton’s sway and is gaining power in the Party. But the FBI has him by the short hairs—if he doesn’t give up dirt on Hampton and the Panthers, they will happily out him to them, and the results will not be pretty.

And really, that’s the plot. There are a lot of twists and turns here, setbacks as well as wins for Hampton. O’Neal plays his part as well has he can and tries to deal with the fact that he is truly betraying Hampton. This is another film where anyone with a little historical perspective knows where we are going by the end, so there are no real surprises here. There are, though, some noteworthy performances.

Judas and the Black Messiah is extremely made, top to bottom, and this starts with the cast. I don’t have a firm opinion on Jesse Plemons, but he’s very good in this. Martin Sheen is all but unrecognizable as Hoover, but his voice is immediately recognizable. But this movie is about Daniel Kaluuya and LaKeith Stanfield. Kaluuya, as always, is excellent and compelling on the screen. But this is Stanfield’s movie more than anyone else’s. Because of that, he’s going to take up most of my focus. Suffice to say that Kaluuya, like always, is compelling on the screen and worth seeing, as is pretty much everyone here. But as good as he is at channeling the passion and power of Fred Hampton, it’s Stanfield’s morally questionable O’Neal who draws focus in every scene he is in—and it’s Stanfield more that Kaluuya who deserved a Best Actor nomination over Best Supporting Actor.

I’ve seen LaKeith Stanfield in probably half a dozen movies, and he never fails to be compelling, even in very small roles. He’s at his best here, and that’s saying a lot given his past roles and performances. O’Neal is a morally questionable and questioning character. He acts to save himself, of course, but is just as compelled by the speeches of Fred Hampton as is anyone who hears him. And so, he is constantly conflicted, and all of this plays out on Stanfield’s face at all times. It’s a masterclass in acting.

Judas and the Black Messiah is an important movie, and, unlike a lot of movies that earn that moniker, it’s a very good one and damn well worth seeing. It’s smart and tragic, and infuriating because these problems aren’t fixed, and in a lot of cases aren’t really that much better than they were 60 years ago. That needs to be talked about, and this is a movie to help that conversation happen—and it needs to happen.

Why to watch Judas and the Black Messiah: Fred Hampton’s story deserves to be known.
Why not to watch: Why were Daniel Kaluuya and Lakeith Stanfield relegated to Best Supporting Actor nominations?