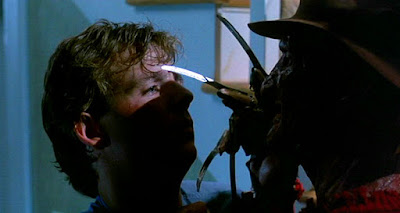 The argument for “worst sequel” is ongoing, although Highlander 2 definitely has a lot of support. Biggest drop in quality between the first film and the second film probably belongs to The Exorcist/The Exorcist II: The Heretic. But, A Nightmare on Elm Street 2: Freddy’s Revenge gets to be in the conversation in both cases. Okay, it’s almost certainly not the worst sequel ever made, but the drop in quality between the classic first film and the abysmal second is pretty steep.

The biggest issue here is that the movie completely messes with the Freddy Krueger mythology, which is the entire point of these films. Freddy is the reason to watch. If you’re someone who has lived under a rock and knows nothing of the Nightmare series, allow me to give you a quick primer. Freddy Krueger is a child murderer who was confronted by the parents of his victims. In a moment of frontier justice, the parents burned him alive and then buried the body somewhere he couldn’t be found. But, Freddy lives on in the nightmares of their children. And when Freddy, who wears a glove complete with razor blade fingers, kills someone in their dream, they die for real.

The original A Nightmare on Elm Street is one of the true classics of ‘80s horror. It was not a surprise when a sequel came out, especially because the original absolutely left the door open for Freddy to come back. But not like this. Freddy’s Revenge was released a year after the first movie but takes place five years in the future, and a lot of what happens here is retconned in future movies. And it should be.

The Walsh family have moved into the old Thompson house on Elm Street. There are rumors that the girl who lived there went crazy after seeing her boyfriend murdered across the street. So Nancy went crazy? I don’t think so. Anyway, while the family gets settled, son Jesse (Mark Patton) starts having nightmares where he runs into Krueger, who wants Jesse to kill for him.

And, so right away you can probably see the problem here. Freddy Krueger doesn’t need someone else to do his killing for him. What we get is a situation where Jesse starts to have strange experiences that mirror the diary of Nancy that he and his kind-of girlfriend Lisa (Kim Myers) find in his bedroom…because of course he’s taken over Nancy’s room.

This would all be fine, but it’s not merely that Jesse is having these dreams—he’s becoming literally possessed by Freddy Krueger to the point that, at times, he literally turns into Krueger physically while somehow remaining trapped inside Krueger’s body. No, I don’t really understand it, either. Sorry. But at several points, He and Krueger essentially swap out from each other, or we hear Jesse’s voice come out of Krueger’s face. It’s pretty dumb. It also doesn’t explain how Jesse, whether dreaming or simply submitting to Krueger’s will, is able to manifest Freddy’s glove at a variety of instances. He shouldn’t be able to do the impossible, and yet he does, over and over.

And it’s mostly dumb because this is a Freddy Krueger that appears to be able to manifest in the real world and kill people outside of their nightmares. There are a number of deaths that happen in the real world in this movie to people who are not sleeping and not dreaming. That seems to be more than just a little against the spirit of the series, and that’s disappointing.

The greatest indignity, though, is the constant repeated annoyance that Jesse calls his tormenter “Fred” Krueger. He’s never “Fred.” That shouldn’t be allowed.

There aren’t a lot of things here that I think make this worth seeing. It’s a dumb movie and a dumb sequel. It doesn’t make any sense at all and it destroys everything in terms of the mythology that the first movie tried to create. Freddy Krueger doesn’t need someone to track down his victims for him or do his dirty work. Evidently, “Fred” Krueger does.

Why to watch A Nightmare on Elm Street 2: Freddy’s Dead: Well, if you’re going to watch the series, you have to get through this one.
Why not to watch: It messes completely with the entire concept created in the first movie.