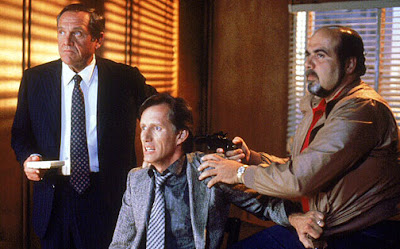 Ah, the horror anthology, my old nemesis. Horror lends itself naturally to the anthology format specifically because horror specifically allows the writer to go right for the jugular and bring the scares. While it certainly helps to have characters who we care about when it comes to horror stories, often all we really need to have is someone we can relate to in any way put in danger. So, the idea of the anthology is to put folks into those situations and rush to the good parts. Ct’s Eye follows this format in a way, but does a few things differently. For starters, the screenplay was written by Stephen King, with the first two stories adapted from two of his short stories.

There are a few things that Cat’s Eye does really well. The first is that, while there is a connecting story that runs through the entire film, not a great deal of time is spent on it. All of these bits involve a cat (who also appears in the first two stories and is feature in the third) being urged on by Drew Barrymore to seek her out and save her. Second, there are only three stories here, and with a 90+ minute run time, we get a good amount of time with each one.

What’s an odd choice is that the first two stories, the two that were adapted from King’s short stories, are decidedly not horror stories. They’d be much better classified as thrillers than as anything else. The third story is definitely a horror story, but is also sadly very derivative of the final part of Trilogy of Terror.

The first story is Quitters, Inc. Our main character (played by human gargoyle James Woods) is trying to quit smoking. He’s taken to a company called Quitters, Inc. where he finds out that backsliding on the program has serious problems. Essentially, the man running the place (played by a deliciously sadistic Alan King) has clear ties to the mob. Backslide once, and your wife ends up in a shock chamber. Backslide again and it happens to your child. And on and on. It’s a great premise, but it’s not horror.

The second story, also not a horror tale, is The Ledge. A fading tennis pro (Robert Hays, still looking exactly like Ted Striker from Airplane!) is having an affair with the wife of a very powerful and connected man who also happens to be a serious gambler. He offers the tennis pro a wager, with the consequences of not taking the bet being the police finding his car filled with heroin. The wager is that our hero needs to walk around the outside of the building on the ledge about 40 stories up. If he makes it all the way around, he gets money, his car cleaned, and the other man’s wife. If he doesn’t, well, it’s a long way down.

Our third story is called General and was written specifically for the film. A young girl (Drew Barrymore) fights with her mother about a stray cat. She also fights with both of her parents about her belief that there is a troll living in the walls of her bedroom. As I said above, this is very much a riff on the third Trilogy of Terror story, although it comes from the point of view of the cat in a lot of respects.

Cat’s Eye isn’t bad. The first two stories are sexed up a bit from the source material, though. The ending of The Ledge, for example, is completely new, and not nearly as good as the original ending of the short story. The problem is that the original ending really doesn’t work cinematically without a bit of exposition, or at least a voiceover. Additionally, the series of punishments in Quitters, Inc. is seriously curtailed from the story and escalates a hell of a lot faster in this version. Again, that’s probably for time. In a movie, you need to more or less show what is happening without needing all of the detail that is available to you in print.

But it’s the third story that really disappoints. It’s the closest one of these to horror, and it’s not particularly scary. In fact, one of the most enduring thoughts from the third tale is just how awful the young girl’s mother is to the cat; at one point, she takes it to the local pound to be euthanized. For someone like me, who likes animals more than he likes people, it’s really hard for my sympathies to come back after that. But even without that, the third story really feels forced. There are other King stories that could have been easily adapted and could have had a cat shoehorned into them the way it was in the first two.

Honestly, though, with anthologies, two out of three ain’t bad, and far better than average.

Why to watch Cat’s Eye: An anthology film that gives the stories enough room to breathe.
Why not to watch: The third story is a straight rip-off of Trilogy of Terror.