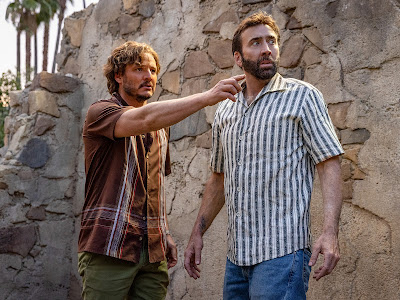 Movies that have meta moments have existed for a long time. The script is mentioned in Monty Python and the Holy Grail and literally appears in Robin Hood: Men in Tights and (I think) one of the Austin Powers movies. The screenplay also appears in a much darker way in Wes Craven’s New Nightmare. But then there are movies that are meta in other ways. Scream has a lot of meta in it, and Being John Malkovich eats its own tail ouroboros-like. But I don’t know that I’ve seen anything go as meta as The Unbearable Weight of Massive Talent.

In this film, Nic Cage plays Nick Cage, who is essentially an alternate universe version of himself in most relevant ways. That means he’s had essentially the same career and has performed in the same movies, but nothing else is really the same. His personal life is completely different. In the film, Nick has an estranged teenaged daughter (Lily Mo Sheen) and an ex-wife (Sharon Horgan) who is constantly frustrated with him, mainly because he is so inept at personal relationships. His daughter is frustrated with him as well because everything is about him—what he thinks is introducing her to what he likes she sees as him forcing his opinions on her.

When a new movie falls through, his agent (Neil Patrick Harris) sends him off to Majorca for an appearance at a birthday party for which he will receive $1 million. The person in question is Nick Cage superfan Javi Gutierrez (Pedro Pascal), who also happens to be a notorious arms dealer who has allegedly kidnapped the daughter of a politician to force him to drop from the upcoming race. The CIA, in the form of Vivian (Tiffany Haddish) and Martin (Ike Barinholtz), recruits Cage to act as a spy to find out the girl’s location.

But, of course, there are complications. First is that Javi and Nick hit it off and genuinely like each other. They bond over movies and a few insane drug trips, and Javi wants them to write a movie together. However, we also learn that Javi is not really in charge of anything—he’s a front put up by his cousin Lucas (Paco Leon), who is the real brains and muscle behind everything. Eventually, the two are put in the position of having to shoot each other or trust each other to save the day.

The meta here that is happening is not specifically the fact that Nic Cage is playing Nick Cage. No, it’s the fact that the movie they are talking about writing is the movie that is literally being made. It starts, as does their film, as a sort of relationship drama about the two of them discovering their friendship ad finding ways to bond. It then turns into an action film in the third act, something Cage suggests as a way to find out where the young girl is being held. Eventually, Cage’s own daughter is kidnapped, which is precisely the plot point that he wanted to include in their screenplay.

The Unbearable Weight of Massive Talent is a movie that is meant to be fun and one that revels in the idea of spinning more and more into meta territory as the film goes on. Things get quickly out of control for the characters, but the film itself is remarkably controlled throughout. It's also clear that everyone involved is having a really good time with this. The entire enterprise is ridiculous, but it also all works in the context of the film.

I will admit to being someone who can find Nic Cage difficult to take in large part because of many of the roles that he has taken. I understand his need for cash because of his insane spending habits, but at times it really did seem like you could get Nic Cage to do anything for $50 and a free lunch. This plays with that idea with the inclusion of a sort of alter-ego for Cage, referred to as Nicky. Nicky is down for anything that puts Cage on screen, that gets him “back” on top, not that, as he tells himself over and over, that he ever left.

What this movie does very well, as well or better than most movies, in fact, is get us to buy in to the story that it wants to tell. We’re willing to accept this version of Nic(k) Cage because we want to, and even when we think that Javi is a terrible person running guns, we want his friendship with Cage to work because we like him, too.

I enjoyed this a lot.

Why to watch The Unbearable Weight of Massive Talent: It’s better than it has any right to be.
Why not to watch: If you don’t do meta, you’ll hate this.