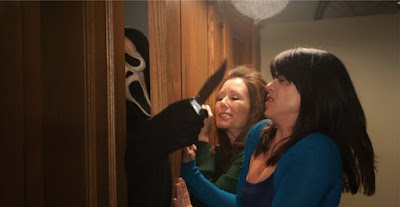 The Scream franchise has always been about breaking down the genre of slasher films as much as it has been about being a slasher film itself. The original was about deconstructing the slasher genre, the second about the rules of sequels, and the third is about the way that sequels work. Scream 4 (or Scre4m, if you prefer) is about the way that remakes of horror movies work. In that respect, Scream 4 is kind of a remake of the original film as much as it is a sequel and the start of something new following the trilogy.

We’re going to have a lot of familiar characters here. Our original final girl, Sidney Prescott (Neve Campbell), has returned to the town of Woodsboro as the final stop on a press tour for her new book. For a wonder, Sidney has attempted to reinvent herself as something other than the surviving victim of three versions of the Ghostface killer. In Woodsboro, we’re going to also reconnect with Dewey Riley (David Arquette), now the sheriff and his wife Gale Weathers-Riley (Courtney Cox). We’re also going to meet some of Sidney’s extended family, her aunt Kate (Mary McDonnell) and her cousin Jill (Emma Roberts).

A lot of the film is going to be what you expect, including the very meta opening. Since a great deal of the Scream franchise is based on the lore that it created, including its own in-movie movie series (Stab), we’re going to start in that world, with a clip from Stab 6 that leads into Stab 7 that leads into the real world. As with many a slasher, we’re going to start with a murder, and since this is a remake, it’s going to follow along the lines of the original movie in some respects.

That’s going to be a theme here. If you’ve seen the first film, you’re going to get a lot here that is very similar. So, like we had the Jamie Kennedy character as a horror movie expert, we’re going to have Charlie (Rory Culkin, and he is the Culkin-iest Culken ever) and Robbie (Erik Knudsen), who run a school movie club. Essentially, we’re going to get a new version of everything in the old version. The original has an attack at a party? This one has an attack at a film festival. Functionally, Scream 4 is a remake of Scream in many major ways.

That, of course, is the point. It means that we’re going to start whittling down the characters, and as more and more people get bumped off, we’re going to find some of our guesses correct and some not so much. That said, if you guess, “Well, that person is going to die” for just about everyone, you’re going to be right in a lot of cases. Eventually, of course, we’re going to wind up in a house with the killer(s) and a showdown with Sidney, because that’s they way the remake works. The characters are new in places, but the story remains in large part the same—just modernized.

Wes Craven was a talented guy, and the Scream franchise is one of his masterpieces. That’s saying a lot for a guy that has Craven’s track record, but it’s true. There’s a lot that Craven did that went south for a while before being reinvented or reinvigorated, though. That didn’t much happen with the Scream franchise, though. Scream 3 is more or less the consensus low point, but even that one isn’t terrible. Scream 4 is a solid return to form for the franchise, even if it doesn’t approach the brilliance of the original. To be fair, though, not many movies can. Scream is a nearly-perfect entity in that it is a damned good slasher and a damned good commentary on slashers. You don’t catch that kind of lightening in a bottle that often.

What this means is that there are some problems here. One of the bigger ones is the relationship between Dewey and Gale. These two had been presented as star-crossed lovers after a fashion in the first three films. There’s implications that Gale was using Dewey in the original, and by the third film, there was a lot of distance between them. Here, they are married, but there is trouble in paradise. Gale is bored in a small town after her massive success and fame. She’s also trying to reinvent herself and can’t figure it out, so when the murders start again, she dives back into reporter mode. But she also thinks she deserves access to the case as if she were a cop, and she’s not. And this just causes more tension between the pair…until it is simply resolved by events in the film. It’s a bit cheap.

It's also worth noting that Neve Campbell’s cry face is really unpleasant to look at. It has been since the first iteration of the franchise, and 15 years haven’t made it any better. Don’t get me wrong here—Sidney Prescott is a damned horror movie legend and Campbell is a damn good scream queen, but the squinty cry face doesn’t work.

Truthfully, no one expects a film this far into the franchise to be much, but Scream 4 is far better than it deserves to be. Movie for movie, this might be the best horror franchise still active.

Why to watch Scream 4: It’s a solid reinvention of the series.
Why not to watch: Neve Campbell’s squinty crying face.