Ten Days of Terror!: The Sorcerers 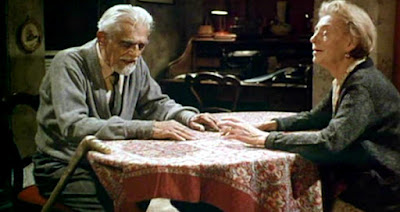 There is something that I very much appreciate about older horror movies. I don’t mind gore when it’s warranted, but the older horror movies, say pre-1972 or so. Because at least the mainstream movies (missing out things like Blood Feast and other Herschel Gordon Lewis films) didn’t use a great deal of gore, they had to be more inventive with what they showed and where the plots went. The Sorcerers, one of the last films of Boris Karloff, is exactly such a film. This is a film that wants to go for real psychological terror rather than splatter, and for the most part, it gets there.

This is a film that should be better known than it is. There are echoes of this film in Strange Days and a whisper of it in Being John Malkovich. It’s going to go to some ridiculous places in terms of the science, but it uses that ridiculous science to give us a story that, in the context of that goofy science, works pretty well.

We start with Professor Marcus Monserrat (Karloff), a disgraced scientist who has worked for years in the field of hypnotism. He and his wife Estelle (Catherine Lacey) have struggled for years, attacked by journalists who think Monserrat is a quack. But he has developed a piece of equipment that he is hoping will revolutionize hypnotism and finally redeem him. To test things out, though, he needs a willing participant.

Enter Mike Roscoe (Ian Ogilvy), a typical disaffected youth who is bored with his job, bored nearly abandons Alan and Nicole in a club and goes off on his own where he encounters Monserrat, who invites him back to his home. There, he is hooked in to a machine and hypnotized, but more significantly, he is put under the direct control of both Marcus and Estelle. Both of them can control Mike’s actions simply by concentrating, and they experience the sensations he does. Even better, Mike has no recollection of what he’s doing and is unable to resist.

For Marcus Monserrat, this is proof of what he has been trying to do for years. His goal is to find willing participants who will go and have experiences that can be transmitted in this way to elderly people who have no real ability to have those experiences anymore. This is not what Estelle wants, though. She wants revenge on the reporters who have destroyed their lives and she wants excitement and fun. As a test, she and Marcus reestablish their control over Mike and force him to break into a store and steal a fur coat for her.

This is additional and necessary proof of concept for Marcus, but it’s not nearly enough for Estelle. She wants to feel speed, so she controls Mike again and they “borrow” Alan’s motorcycle with Nicole. She forces him to drive as fast as he and he does so, scaring the hell out of Nicole. This horrifies Marcus, though, who tries desperately to stop Estelle, but discovers that her will is far stronger than his. He is unable to take control and override what Estelle wants, and what she discovers that she wants forbidden thrills with the complete freedom of knowing that she can’t possibly get caught.

What this means, since this is from 1967, is that Mike is going to go on a crime spree. Remade today, my guess is that we’d get a lot more sex than we do, but since this is a horror movie, what we’re going to get specifically a few murders that Estelle is going to enjoy more than she should.

The science, of course, is stupid. The fact that Marcus and Estelle can “reconnect” with Mike when he is miles away and they don’t even know his location is pretty silly. If you accept that, though, you can easily buy into the idea that they really feel his sensations and emotions when they are actively linked to him. Where even that slides off the rails, though, is the idea that if Mike wounds himself (he does during the robbery, for instance) that they will manifest the same wounds. Once you see that happen, some of the details of the third act should become clear to you, at least in part.

This was surprisingly entertaining. What I like here is the fac that it gets very dark in terms of what the technology we’re presented with represents. Given the power that it suggests, Estelle gets lost in the experience of power. There is such a quick drop off from where she starts as a woman interested in restoring her husband’s reputation to a woman who is suddenly granted real power and no check on it other than her own conscience.

If I have a complaint, it’s the fact that it doesn’t go anywhere unexpected. Once certain parts of the plot were in place, I knew what was going to happen, and while getting there was still interesting, I could have hoped for a better and more interesting ending.

Why to watch The Sorcerers: It goes in a direction you really don’t expect.
Why not to watch: Once you get the premise, it’s clear where it wants to go.