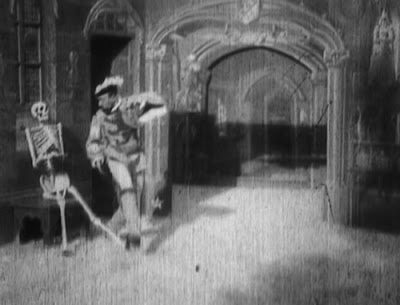 I’ve been avoiding shorts on the horror movies list for no real reason other than aesthetic ones. Getting rid of shorts from the list makes it feel a little like cheating; wanting to watch 400 movies per year is a lot easier to accomplish when one of the movies is three minutes long. But it’s time to get through a few of them, and I started with the oldest film on the list, arguably the first-ever horror movie, Georges Melies’s The House of the Devil (otherwise called The Haunted Castle and Le Manoir du Diable).

With a running time of three minutes, we’re not going to get a great deal of plot in this one. That said, this was a long film for the time—this running time was considerable for what people were used to before the turn of the century. Most of the film is Melies learning what he is capable of doing with film. He’s experimenting with making things appear and disappear, something that would be used to astound and amaze people at the time and would be eventually used for both horror effects and comic effects by other directors. In that respect, this is sort of a one-trick pony. We’re going to get a lot of things popping in and out of existence or moving around from spot to spot on screen.

We start with an appearance of a large bat that suddenly turns into the devil. He makes a cauldron appear, along with an assistant, and the two of them essentially create a woman. A couple of men appear, and one of them is scared off by what is happening. The other deals with disappearing and reappearing furniture, old crones, spectres, and the devil himself before defending himself with a large cross. That’s pretty much the entire film. There’s not a single intertitle to explain exactly what is happening, so it’s important to pay attention to the actions on screen. Not all of these plot elements are really that obvious.

This is not a scary film by any stretch, and evidently it wasn’t considered that scary at the time. It really is about the experimentation, about discovering what film is capable of showing and what it isn’t capable of showing, at least at the time. Melies probably couldn’t care too much about plot, such as it is, when he could focus on having a skeleton appear at one point or seeing an entire crowd of white-clad spirits suddenly show up in the frame. These are baby steps in what would become possible, but they are important steps to be taken.

It's fun, and that’s probably enough. It would be easy to skip, but at just three minutes, why would you care to skip it? This is a true piece of cinematic history, one that is definitely worth tracking down, not that that takes any effort; you can find this all over YouTube. Hell, there’s even a link to the full film on the Wikipedia page. 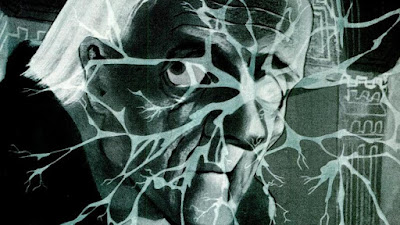 Of all of the stories written by Edgar Allan Poe, few are as known and beloved as The Tell-Tale Heart. I’m going to dive into spoilers here because this is a story that is well over 100 years old, and it’s an incredibly short and well-known story. If this is going to spoil the story for you, that’s on you.

Essentially, the story is a tale told by a man either in an institution or awaiting his own execution, convicted as he is of murder. He tells us the story of the murder of his elderly friend who he killed specifically because of the man’s eye, which is essentially scarred and blind, and a pale, unpleasant light blue. He tells us the details of the man’s murder, which culminates with his disposal of the body under the floorboards of the house in which the pair lives. He goes to great lengths to talk about just how careful he is, moving as slowly as possible (and demonstrating his own insanity in the process).

Shortly thereafter, the police arrive, having been alerted by neighbors who heard the screaming. Our narrator invites the police inside and entertains them but is eventually distracted by a sound that he interprets as the old man’s still-beating heart. Eventually, he rips up the floorboards and shows the evidence of his crime.

The animation in this short is beautiful, and really is the reason to watch this. Virtually everyone who is going to come to this short film is going to already know the story, and so it’s the animation that makes it worth watching. The other selling point here is the narration, which is delivered with brilliance by none other than James Mason.

Where I think the film falls down is in the actual text of the screenplay. The Tell-Tale Heart is a very short story, just a couple of pages in the copy that I have. It would certainly be worth adapting the entire story, but this leaves out huge portions of the text. This was almost certainly done to avoid having to animate the entire story, but as much of this takes place in the dark, large portions of the film are completely black as well. For such a short story, it seems like an odd choice, though. Reading the entire story aloud won’t take more than 15 minutes, and the film here is about eight.

Still this is a hell of a nice bit of film. It was originally given an X certificate in the UK, and was also Oscar-nominated for short films. It’s additionally been included as one of the most important animated films ever created and added to the National Film Registry. I can’t say it doesn’t belong there.

The third short I watched for this was Kitchen Sink, the most recent of these three films and by far the most disturbing. Written and directed by Alison Maclean, Kitchen Sink is a sort of domestic horror, one that leaves a lot open to possible interpretations. It was clearly made on a very small budget and with what looks like film stock designed to make it look gritty. In that respect, it reminded me of something like Tetsuo: The Iron Man, but I was even more put in mind of the films of Maya Deren.

Essentially, a woman (Theresa Healey) is cleaning her sink and discovers what looks like a hair coming out of the drain. She pulls on it, and the hair keeps grown, getting thicker and harder for her to pull out of the drain. Eventually, she recovers something that looks like a cross between a fetus, a doll, and tree roots. Over time, she decides to wash off the object and it grows into an adult man covered in hair.

I don’t really want to delve too deeply into the plot because there are plenty of the ways that Kitchen Sink can be interpreted. It’s really a film that deserves to be seen without a lot of preconceived notions, at least past the first four minutes or so. It is by turns shocking and horrific and then calm and almost domestic, switching back and forth, with a number of stops between. In many ways, Kitchen Sink feels like a whole new ballgame every minute or so as the situation changes and the characters react to each other.

This is a dark and strange film in a lot of ways. There is definitely a sense of the woman wanting something and the man who originally came from the drain wanting something as well. The horror here is that neither of them can get what they want. That’s exactly the intent here, at least to me. Our woman wants to be alone, but is simultaneously wants to be with someone else, perhaps even to have a family. Is that what this is about? Is it about conflicting goals and desires?

Honestly, it might as well be. I’m not always that fast at figuring out the intent of more artistic fare like this but there are moments here that will haunt me, and that’s a pretty solid compliment for a movie that runs less than 14 minutes.

Why to watch The House of the Devil: It’s the first horror movie ever made.
Why not to watch: At three minutes, there’s not a lot here.

Why to watch The Tell-Tale Heart: It’s Oscar-nominated, on the National Film Registry, and considered one of the 50 greatest animated films in history.
Why not to watch: It’s not the complete text, which is an odd choice.

Why to watch: Kitchen Sink: It’s disturbing in the right way.
Why not to watch: It looks like the budget was $9 and some Chicken McNuggets.