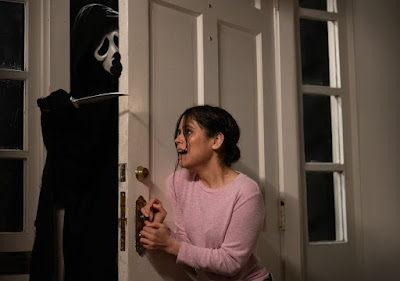 I have to say that I was skeptical going into the 2022 Scream. I was annoyed that they decided to call it Scream as if it were a reboot of the series rather than what it essentially is: Scream 5. But, that’s part of the genius of the series. Scream et al. has always been about the meta commentary and about its own self-awareness. The films have, in turn, commented on the nature of the slasher, sequels, trilogies, remakes, and now in the fifth installment, reboots.

I was also concerned that it would suffer from no longer having Wes Craven at the helm. Craven is my favorite pure horror director, hands-down (Guillermo del Toro if we’re talking all movies from someone horror-aligned, but…). But he lost control of some of his series and he made some bombs. Most horror franchises go off the rails at some point—there are some deep, deep lows in the franchises of A Nightmare on Elm Street, Child’s Play, Friday the 13th, Halloween, The Texas Chain Saw Massacre and other franchises considered classics (consider just how bad The Exorcist II: The Heretic really is, especially compared with the first film). But Scream, under the care of Craven, never went off the rails. Series low point, Scream 3 is better than a lot of mid-points of other storied franchises. But how would it be without him at the helm?

I needn’t have worried, because Scream is, while not as good as the original, still damned good. It reinforces the idea that this is the strongest of any horror franchise that is currently still putting out movies. This is, at least in my opinion, the second best film in the franchise, and for a franchise that has managed to remain this good, that’s really saying something.

This is a take on the idea of reboots, though, which means we’re going to have mainly a new cast of characters. We’ll still have some appearance of what are going to be called in-movie the legacy characters, because as with most of the sequels, a lot of what we are going to be seeing is going to be addressed through the lens of the in-movie franchise Stab, based on the experiences (at least in part) of the characters in this movie. What this means is that we’ll get to Sidney Prescott (Neve Campbell), Gale Weathers (Courtney Cox) and Dewey Riley (David Arquette) soon enough, but we’re not going to start there.

Since again, this is addressing the idea of reboots, we’re going to start the same way—a young woman taunted on the phone and then attacked by the latest version of the Ghostface Killer. This time it’s different, though. Our victim, Tara Carpenter (Jenna Ortega), manages to survive the attack. Her estranged sister Sam (Melissa Barrera) hears what has happened and decides to come home, along with her boyfriend Richie (Jack Quaid).

And, of course, a lot of what essentially happened in the first film is going to happen here, because, once again, Scream is about the reboot. There will be a lot of changes, but a lot of this is going to feel familiar. We’ve got a close-knit group of friends. Is one of them the killer? That’s how it worked in the original. Are there going to be two killers? That’s how it worked in the original, too. Slowly, people connected in some way to Sam and Tara start getting killed off and more and more information comes to light. But how are we going to pay homage to the original killers? With the discovery that Sam’s father was none other than Billy Loomis (Skeet Ulrich), one of the killers in the first film. This is something Sam knew—we find out how eventually—but it’s hinted at beforehand because Sam likes to hallucinate Billy when under stress.

Ultimately, Scream does what the franchise does best. It fulfills all of the genre expectations that we have, but still manages to subvert those expectations and be surprising. What this means for us is that, as usual, there is going to be a series of violent, bloody murders that all tie back to the original story and that pay homage to the first film. In this instance, there are going to be literal blood ties to the first murders to match the original story’s DNA, if you will. And this is going to come at a cost to several of the characters who have been down this road before.

Scream is not a perfect film, but it’s a very good one. For a film that really wants us to walk down that same road we’ve been down before, it manages to be surprising and entertaining rather than a retread. It’s also smart enough to give us characters with real lives. Sidney has an actual life—she’s married and has kids. And the relationship between Gale and Dewey, always on-again, off-again, is off again but doesn’t feel like the sort of teenage break-up that it has in the past. Their relationship is broken in real ways and for real, believable reasons.

One thing that comes up in the film, since this is a self-referential film and this one concerns reboots, is that it’s time for the original cast to be moved on. Typically in a reboot, members of the original cast will make minor appearances, but will have new, younger stars in their roles. That’s not the case here, but it is referred to—it’s time for some new blood. As sad as it is, it’s kind of true. Frequent readers will know that I don’t comment on the appearance of actors on this blog very often, but Courtney Cox is starting to look a bit like Skeletor.

Why to watch Scream (2022): The Scream franchise remains the best horror franchise still going.
Why not to watch: The original cast is looking its age.