Film: Some Like it Hot
Format: DVD from personal collection on laptop 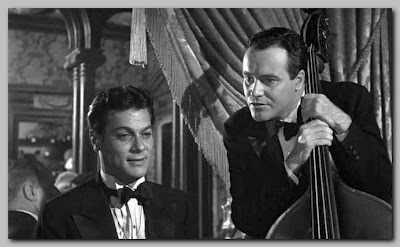 Tony Curtis is dead. I heard the news today, and knew instinctively that I’d be watching Some Like it Hot, the best film Curtis was ever a part of. This is a film that no other comedies should be judged against. The reason for this is simple: if other comedies needed to be as good as Some Like it Hot to be worth seeing, no one would ever watch any other comedies. It’s been tagged as the greatest comedy ever made, and while that might be stretching a little, it’s not stretching by much.

We start with two down-and-out musicians named Joe (Curtis) and Jerry (Jack Lemmon). The pair are willing to take just about any job out there. This is because they’ve lost their job playing in a mob-run speakeasy, which was raided on payday. In the process of looking for work, they stumble onto the crime of the decade—the cinematic equivalent of the St. Valentine’s Day Massacre.

The good news is that one of their agents has a job that requires a saxophone and a bass player for a three-week gig in Florida. The bad news is that the job is with an all-girl band. Desperate to get out of Chicago so that they won’t be identified to testify at the trial of the mob boss responsible for the slayings (also their former boss at the speakeasy) or identified by the mob and rubbed out, the pair dress themselves up in drag, take the gig, and head off to Florida as Josephine (Curtis) and Daphne (Lemmon).

The running joke here is that the pair are able to pull it off in close quarters with a large group of women without anyone managing to suspect. This is especially ridiculous because Daphne/Jerry is a complete horn dog chasing anything in a skirt and is suddenly around dozens of attractive ones who spend the evening in their underwear. They also run into the band’s singer, Sugar Kane Kowalczyk (Marilyn Monroe). Jerry is taken with her initially, but it’s Joe who eventually falls for her, particularly because she has a thing for tenor sax players.

On the trip down, Joe manages to discover what Sugar is really looking for in a man—young and rich. She’d prefer one wearing glasses because they’re “more sensitive” and if nothing would be better than if he had a yacht. Naturally, when the band gets down to Florida, Joe steals the band manager’s suitcase for the resort clothes and his glasses to complete the look. He manages to meet her on the beach, fakes a Cary Grant-esque accent, and claims to be the heir to the Shell Oil fortune.

In the meantime, Jerry has his own problems in the form of Osgood Fielding III (Joe E. Brown), a wolfish millionaire who evidently has a thing for guys in drag. He’s completely taken with “Daphne” and pursues her relentlessly, claiming to have a fascination with show business, or at least with show girls, having married at least seven of them in the past.

This sets up the middle of the film in which Jerry is pursued by Osgood and Joe pursues Sugar. Jerry leads Osgood on, allowing Joe to use the trappings of Osgood’s wealth, like his yacht, to further impress Sugar with the millions she thinks he has. It’s all in good fun until the gangsters, headed by lead mob boss Spats Colombo (George Raft) turn up at the same resort in a Shakespearean comedy twist. Now, the pair are forced to stay in character even though both desperately want out—Jerry to get away from Osgood and Joe so he can continue to woo Sugar as the pretend millionaire.

Naturally, the whole thing is played for laughs. This is not a film that attempts believability, and who cares that it doesn’t? The whole point of the film is to be madcap and silly—to put these two guys into this ridiculous situation and see what happens. And if there are a couple of Marilyn Monroe songs along the way (and there are, including the classic “I Wanna Be Loved By You”), so much the better.

Films don’t get better than this and only rarely get this good. It’s just as joyfully fun today as it was fifty years ago, and it hasn’t aged a day.

Vaya con Dios, Tony. Thanks for this one.

Why to watch Some Like it Hot: Billy Wilder’s best comedy, and that’s saying quite a lot.
Why not to watch: You’re a complete, blithering idiot.
Posted by SJHoneywell at 11:38 PM