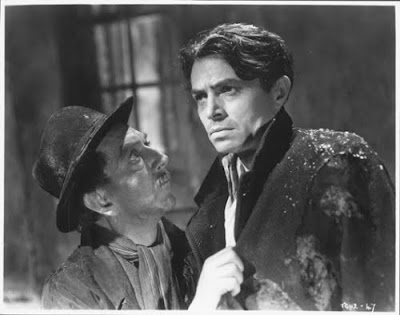 The comedian Eddie Izzard does a great impression of James Mason. Usually, it’s Izzard talking as God with the voice of James Mason. This is, I think, appropriate. James Mason was a hell of an actor. He could play anything—good guys, bad guys, misunderstood geniuses, and conflicted heroes. He happens to be the bad guy in North by Northwest, which is my favorite movie ever. How could I not love James Mason?

Mason plays an Irish rebel named Johnny McQueen in Carol Reed’s Odd Man Out. It’s never mentioned exactly what organization McQueen works for, but it’s not difficult to make the assumption that the works for the Irish Republican Army. Regardless, McQueen broke out of prison and has reunited with his cell. For months he has planned a raid on a mill to generate the cash needed to keep his cell of the organization going.

It all goes according to plan until the gang makes its break after the heist. Johnny is temporarily dazzled by the light of the sun and is attacked by a guard. In the scuffle, two shots are fired; one hits Johnny in the left shoulder while the other kills the guard. Johnny is pulled into the getaway car, but falls out, and the rest of the gang bicker and end up abandoning him while Johnny runs off to hide.

What follows is series of interconnected vignettes. We see the members of the gang fight with each other, blaming each other for what happened to Johnny. Johnny staggers off, now badly wounded both from the gunshot and the fall from the car, and finds himself in an abandoned air raid shelter left over from the war. No one wants Johnny back safely more than Kathleen (Kathleen Ryan), since it is evident she loves him desperately—although it may not be clear to Johnny himself.

While the various gang members attempt to rescue Johnny and come to a variety of conclusions, Johnny begins to hallucinate, is spotted a few times, and attempts to stumble home. What ensues throughout is that Johnny becomes less a man and more of a problem for the people who encounter him. Everyone he meets quickly discovers who he is, and either wants to help him or bring him to justice for their own selfish reasons. The police are looking for him and offering a substantial reward. Many see the betrayal of Johnny and his friends both morally correct and financially beneficial. Others see his presence as a problem to be dealt with, seeking only to shove him off to somewhere else before they are caught with him.

Where Carol Reed went right here is in keeping politics as far away from this film as he could. There’s no morality here in terms of Johnny’s believes, the rightness or wrongness of the IRA, or the actions taken by Johnny McQueen. Reed doesn’t ask us to praise Johnny and his band of revolutionaries, nor does he expect us to condemn him or be morally outraged by him. Instead, the film concerns Johnny’s struggle to survive the night, wounded and hunted like an animal, and ultimately, an animal is what he becomes.

What’s worth seeing here, though, is that Johnny is not the only one who turns into an animal. The characters who interact with Johnny act the same way. They become interested in Johnny only for what they can get from him—money, fame, power. Johnny stops being a man and starts instead to be merely an object, a thing. Conversations happen around Johnny and at him rather than with him.

Mason’s portrayal of Johnny McQueen is played in mime, essentially, for a large part of the film as people talk around and about him. Much of the drama comes from his eyes. It’s a hell of a performance to convey as much as he does throughout the film without speaking. It allows both Mason the actor and Johnny McQueen the character to deliver a rousing speech toward the end of the film in a way that is believable, even inspiring.

For a film that is ostensibly a political drama, or at least promises political overtones at the beginning, it instead turns out to be a very human drama. A police inspector hunting for Johnny to bring him to justice sums up the essential mood of the film when he says, “In my profession there is neither good nor bad. There is innocence and guilt.” Reed’s film doesn’t ask us to judge whether or not the cause is just, but how the person of Johnny McQueen should be viewed. That he is guilty is certain—the value of his beliefs is not on trial. What is a bigger question is whether or not he should be viewed with sympathy or empathy.

That sympathy can only come, however, if we are capable of viewing the man’s actions as justified. Or can it? Mason’s portrayal of the wounded and dying man is geared to create exactly that sympathy, and it works. Agree with the cause or not (and really, as a non-Irish American, I’m pretty neutral) the character engenders a significant emotional response. That’s the genius of Odd Man Out.

You want to know what’s even better? You might be able to guess the ending correctly, but you won’t really know how it’s going to turn out until the last few minutes, and yet the ending fits with everything we’ve been shown.

Why to watch Odd Man Out: Plots and twists and turns and no one to trust. Oh, and James Mason.
Why not to watch: A tendency to speak in an Irish accent once the movie is done.
Posted by SJHoneywell at 11:58 AM