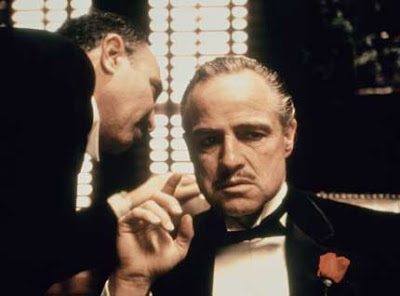 If you are older than 15, you’ve probably seen both The Godfather and The Godfather Part II. My wife has not seen either of these films and doesn’t really have a lot of interest in them. That makes her one of about five adults in the world who have never seen these movies.

With that in mind, I’m going to guess that the chances are very good that, male or female, you’ve seen these movies, so I’m not going to delve into plot here much beyond the very basics. There are plenty of places both on the Internet and elsewhere you can discover summaries of these films. And really, since the combined length of the films is over six hours, even a cursory summary here will have me typing for the next hour.

Suffice it to say that The Godfather is the story of the Corleone crime family. Specifically, we have Vito Corleone (Marlon Brando), who took the name when he arrived in America in the early part of the century. His last name is actually the name of the town he grew up in, and it was given to him by one of the immigration officials. Vito has four children: Sonny (James Caan), Fredo (John Cazale), Connie ( Talia Shire), and Michael (Al Pacino). Sonny is to be the next boss, and is hot-blooded and uncontrollable. Fredo is weak and not very bright. Connie is wild and spoiled. Michael is the family pride. He is to be kept out of the business so that he can be respectable.

A war starts between the Corleone family and the other crime families in New York based on the drug trade—Vito wants no part of it because it’s dirty. This leads to an assassination attempt on him, one that he survives. The war continues, significantly in that Michael enters into the conflict as an active participant despite the fact that he has always been a civilian—untouchable because he is a war hero and not a part of the criminal enterprises.

Of course, things don’t work out the way Vito Corleone planned, as Michael becomes more and more embroiled in family business, eventually ending up in charge of the family. 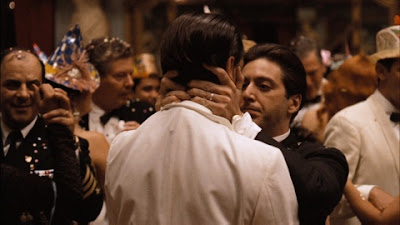 The sequel picks up several years after the original film stops. We also get a number of flash backs to the early oughts and the early pre-crime life of Corleone (played here by Robert De Niro). Corleone is poor, and loses his job to a crime boss in New York. When he turns to crime and is forced to give up some of his take to the boss, Vito plots to kill him and does so, leading to his eventual respect in the neighborhood and his life of crime as the head of a major syndicate, all of which is covered in the first film.

This film also concerns the continued criminal career of Michael and his role in charge of the family. Michael has learned to become ruthless, and acts in the way to best further the aims of himself and his people, despite promises to turn the family’s businesses legitimate he makes to his wife, Kay (Diane Keaton). This story is much more about Michael’s consolidation of power as the head of the family and his own maneuverings made under the tutelage of his father.

Both films are really about Michael. The first concerns his entry into the family business as the one sibling most untouched by the life of crime originally. It’s important that his entry into the criminal world is voluntary—he makes it himself rather than by force from someone else, and this dominates every decision he makes from that point forward. While the second film does include the back story of Vito Corleone, it is also Michael’s film. His efforts to make the family business legitimate come to nothing, and he can do nothing to leave the life of crime he has entered, and soon no longer has a desire to do so.

These are sprawling films filled with death and pain. They also feature tremendous casts. In addition to the people above, Robert Duvall plays Tom Hagen, the family lawyer and all but adopted son. Other roles are played by Bruno Kirby, Lee Strasberg, Troy Donohue, Abe Vigoda, Harry Dean Stanton, Danny Aiello, Sterling Hayden, and more.

It may be that The Godfather films glamorize the Mafia and the criminal life despite their bleakness. Glamorized or not, these films are tremendous portraits of the people in them. All of their stories are tragic and unhappy, and while I find it difficult to really like them, there is still a great deal of empathy for them. There is cruelty throughout, and pain, and very little that happens here is good in any sense of the word.

But it is brilliant. Both of these films won Oscars for Best Picture; the second was the first sequel to do so. The third, considered by most people to be the poor stepchild of the bunch, was nominated. It is the worst of the lot, but is still good—but suffers in comparison with the first two films. It’s hard to be the third film following two of the greatest films ever made.

Which is better? Hard to say. They are both exemplary films, evidence of Coppola’s skill at that point in his career. If you’ve never seen them, spend a day with them and allow yourself to become engrossed in them. They are worth it.

Why to watch The Godfather: Movies don’t get much better.
Why not to watch: There is no reason to not watch this film.

Why to watch The Godfather Part II: It has everything.
Why not to watch: Few films glamorize the idea of the mob more than this film.
Posted by SJHoneywell at 12:18 AM