Film: The Silence of the Lambs
Format: DVD from DeKalb Public Library on laptop. 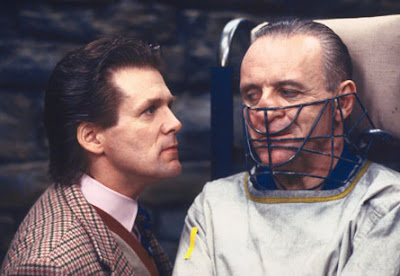 Certain movie scenes are iconic. Chief Brody telling Quint that they need a bigger boat. Nigel Tufnel saying that his amplifiers go to 11. Rhett Butler not giving a damn. Another of these iconic scenes is Hannibal Lecter telling Clarice Starling about what he ate with his fava beans and Chianti.

The Silence of the Lambs is actually the second film featuring Hannibal Lector, but Manhunter (reviewed a few months ago here) sadly flopped. In that film, the cannibalistic Lector (spelled “Lecktor”) was played by the great Brian Cox. Here, of course, is the Lector that everyone knows and loves—the Anthony Hopkins version.

Lector is the one who makes the film what it is, and anyone who has seen this film will agree. However, he is not the focus of the film. He is almost entirely tangential to the actual plot of the film. He shows up a few times and is more of a red herring than anything else, albeit an incredibly fascinating and disturbing red herring.

The plot centers around FBI academy student Clarice Starling (Jodie Foster) and a serial killer who has been dubbed Buffalo Bill (Ted Levine) by the press. She is sent by the head of the Behavioral Science unit, Jack Crawford (Scott Glenn) to interview the noted serial killer and cannibal, psychiatrist Dr. Hannibal Lector (Hopkins). The goal of this interview, at least initially, is a simple personality profile of the doctor, but in reality, Crawford is looking for insight into Buffalo Bill, something Lector picks up on right away.

Clarice’s first visit to Lector is a startling one. He has significant insight into her as well as her reasons for being there. Additionally, Clarice encounters the doctor who runs the facility that houses Lector. This is Dr. Frederick Chilton (Anthony Heald), who is a careerist, smarmy, and rather unpleasant. Lector and Chilton despise each other, which becomes evident quite quickly.

Meanwhile, Buffalo Bill kidnaps the daughter of a U.S. Senator, planning on adding her to his collection of murder victims. We learn that he evidently keeps his victims for a couple of days before killing them, and, once they are dead, he partially skins them for a trophy (hence his nom de press). Lector keeps himself relevant here by claiming to know the identity of the killer, but actually sending the FBI on something of a wild goose chase that only hints at the truth. Instead, he gives his real clues to Clarice, demanding that for each piece of information and each hint he gives her that she give him something of herself back.

Lector forces Clarice to relate the most terrible moments of her childhood, specifically the death of her father and her subsequent move to a horse and sheep ranch in Montana. She ran away from the ranch when she discovered the fate of the spring lambs (a moment that also gives us the title of the film). Lector tells her that everything she needs to find Buffalo Bill is contained in the case file.

The Silence of the Lambs really trades on specific key scenes that are disturbing and horrifying. Each of the scenes with Buffalo Bill, for instance, are exceedingly creepy, as they were no doubt intended to be. Bill’s victims, relegated to a deep well in his basement, are forced to lotion themselves at his command to keep their skin soft for his later skinning. We also learn that Bill is not merely skinning his victims, but is using the pieces he takes to fashion a suit of clothing for himself—a woman suit made from the skins of his victims. Bill refers to his victims as “it,” refusing to recognize their humanity. This is the source of one of the film’s more famous quotes: “It rubs the lotion on its skin or else it gets the hose again.”

Another of these shock sequences is the escape of Lector from his prison cell. Using a piece of a ballpoint pen he stole from Dr. Chilton, Lector picks the lock on his handcuffs and then brutally kills his two guards. One of these he disembowels and strings up. The other, we think initially, is horribly disfigured but left alive. We learn later that Lector—echoing the crimes of Buffalo Bill—has removed the man’s face and is masquerading as him in the ambulance, which he uses to complete his escape. Truly, the reveal as he pulls the “mask” off in the back of the ambulance is one of filmdom’s greatest and most terrifying reveals.

The ending is perhaps a little to Hollywood climax, but still effective. Clarice, naturally, is the one who stumbles upon the true location of Buffalo Bill, and plays cat-and-mouse with him in his darkened basement while he pursues her, armed with both a large pistol and night vision goggles.

The strength of this film rests on those shock scenes listed above as well as others—Buffalo Bill’s naked dance, for instance, cannot be unseen. But had the film merely had these shocking scenes, this film would not be noteworthy. The extreme natures of the crimes depicted as well as the extreme nature of the Lector character would have made any number of slasher film fans and gorehounds want to see it.

It’s the portrayals of these characters—Buffalo Bill, Clarice Starling, and Dr. Hannibal Lector in particular—that make this movie something to seek out by those interested in more than just shock and gore. There’s plenty of that, but with just that, it would be a good shock film. Instead, Clarice Starling is made incredibly human throughout. She is strong, tough, and tenacious, but also terribly vulnerable and disturbed by the events she sees unfolding in front of her. Lector is vicious, evil, and psychotic, but also strangely charming; he’s a character director Jonathan Demme described as being a good man trapped in the mind of psychotic, and that’s what Hopkins gives us. And Buffalo Bill is truly terrifying. In many ways, Ted Levine is the forgotten man in this film. So much attention (deservedly) went to Hopkins that it’s easy to forget the daring and in many ways brave performance of Levine.

Almost twenty years after being filmed, this film has not lost a step and has not aged.

Why to watch The Silence of the Lambs: It rises far above shock value and gore to be a real film that simply happens to be about horrifying topics.
Why not to watch: If you’re squeamish, you won’t make it halfway through.
Posted by SJHoneywell at 9:29 PM