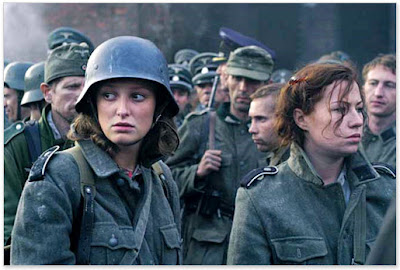 One answer is comedy. One of the only ways to deal with the enormity (using that word in its original, correct sense) of what happened in the 1930s and ‘40s in Europe is to make it ridiculous. Mel Brooks did that over and over in a number of his films, as if to say that despite the best efforts of the Nazis, the Jews are still around and surviving. To go to that type of extreme makes a certain sense. It also makes sense to paint the Nazis as inhuman, almost supernatural monsters. The evil was so great that it is almost incomprehensible that it could come from human beings.

But how do you deal with the reality of the history if you are a German filmmaker? Der Untergang is the answer. You paint Hitler as a man. A sick, twisted, insane and palsied man, but still a man because that’s what he was. The cruelty, the evil, the destruction, and the insanity all came from a very human mind. This is precisely what Oliver Hirschbiegel has done.

Der Untergang is the story of the last few days of Hitler’s life in the Berlin bunker. The film opens with comments from Traudl Junge, Hitler’s private secretary, and an old woman when this film was made. We see Hitler (Bruno Ganz) hire the young Traudl Junge (Alexandra Maria Lara) in 1942, and then, for the rest of the film, we jump forward to April, 1945, and the end of the war.

This is the story not so much of Hitler himself, but of the death of the Third Reich. Most of the story takes place within the bunker, as surviving members of the Reich hierarchy come and go, are given impossible orders, and seek to either remain loyal to the ideals they hold to, or to save their own skins. Nothing, and this is important here, is glossed over, prettied up, or sugar coated. The characters speak frankly of their planned suicides, and Hitler passes out cyanide capsules to those he favors as a good, painless method of killing oneself. We witness Magda Goebbels (Corinna Harfouch) drug and then poison her six children and then commit suicide herself with her husband.

This is not really a war movie. It is instead a movie about death, blind loyalty, and the destruction of a terrible evil. This doesn’t make the film a happy one by any stretch of the imagination. Normally, I’m someone who will happily cheer when a few Nazis get blown up or gunned down. Here, though, we are witness to senseless slaughter ordered by a man who was determined to destroy the state he had tried to create.

While this is Junge’s story, the focus is naturally on Hitler himself until he exits via cyanide and bullet at the end of the film’s second act. I cannot imagine that this was an easy role for Ganz to play. How does one take on the role of one of the most despised people in history, particularly when that person is from one’s own heritage?

Der Untergang is not an easy or pleasant film to watch. It is, however, an important film to watch. All of the horror, the gruesome deaths, the suicides, the slaughter, and the misery bear with them an important history. No matter how painful it may be, we must be honest with the past. No matter how much we may not want to discuss it or deal with it, everyone’s cultural past is filled with terrible acts that we must understand and learn from. Hirschbiegel has made an important and daring film, and he deserves a lot of credit for not just taking it on, but taking it on in this unflinching and direct manner.

The film ends with another comment from the real Traudl Junge. She claims to have known nothing of the concentration camps until the trials after the war. But, she says, she could have found out. Her age (22 when hired as Hitler’s secretary) was no excuse for not discovering the evil of her countrymen. She’s right. We have the same responsibility.

Why to watch Der Untergang: Germany comes to grips with its terrible past.
Why not to watch: It’s grueling.
Posted by SJHoneywell at 1:25 PM