I Can Count to Ten

Film: Dekalog (The Decalogue)
Format: DVDs from NetFlix on laptop. 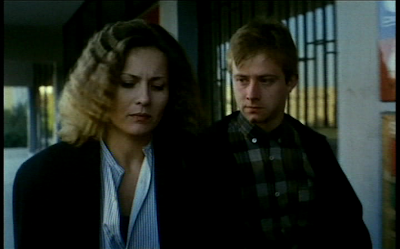 The word “masterpiece” gets bandied about frequently when speaking of any artistic endeavor. I’ve certainly used it more than my share of times on this blog in the past eight or so months. And yet, when a true masterpiece is encountered, it is undeniable. There isn’t another word for it. When Stanley Kubrick was asked to name a masterpiece created within his lifetime, he could name only one: Krzysztof Kieslowski’s Dekalog.

This is not a film. Instead, it is a series of ten films are loosely on the Biblical Ten Commandments, or at least a version of them. It was interesting to me that there are different versions, or that they are at least broken down differently. The version I learned way back when, for instance, considered coveting as a single commandment, while the version here considers coveting a neighbor’s wife as the ninth, and a neighbor’s goods as the tenth. Regardless, the sentiments are the same despite differences in division.

Each of the ten films deals at least in a vague way with a single commandment, although the division isn’t perfectly clean. While one edict may be the main part of the story, elements of other commandments creep in and help drive each plot forward. The connection between the stories, other than the obvious Biblical references, is that all of the take place in the same block of apartments in Warsaw, each film is just shy of an hour long, and a young, unnamed man appears in the background of all but the final film. They are also all very slow to develop, with the true direction of the film often not being revealed until mid-way through. Sometimes, situations from one story or related people will crop up. The story of the second film is referenced in the eighth, for instance. The tenth film concerns the sons of a minor character in the eighth.

Because of the subject matter here, each of these stories pivots around ethical dilemmas, where people are forced into making terrible, difficult choices or are forced to deal with the consequences of decisions they have made. The main characters are placed into situations where a particular sin becomes a temptation, or even a necessity, with all that this entails.

What strikes me here is the inventiveness of some of these stories. Coming up with an hour-long drama dealing with infidelity or murder, for instance, would be easy. But how does one make a drama out of a false idol or keeping the Sabbath holy? Kieslowski, who co-wrote as well as directed these films, creates moving, beautiful stories to answer these questions, and does not stop there. The tales concerning the relatively “easy” commandments of adultery, killing, and covetousness are handled with the same level of inventiveness and style. In going deeper into each of the commandments, Kieslowski brings up and deals with complex moral issues.

For instance, in the fifth film, the topic is murder. A young man named Jacek kills a cab driver seemingly at random. The death is a terrible, brutal affair that lasts far longer than it should, either because Jacek cannot deal with his actions or because he is torturing the driver. Regardless, Jacek is caught, convicted, and sentenced to death. His attorney attempts to argue against the death penalty to no avail, and Jacek is killed, almost as terribly and brutally as the cab driver. So if killing is proscribed and Jacek a terrible human being for committing murder, why is it that we allow the state to commit the same act? How are the actions of his executioners any different from his own? Certainly this is an argument that could go around and around, but the fact that the film addresses that argument is a great thing. It’s a perfectly legitimate question, and one that the film asks, but leaves the viewer to answer.

The second film tells of a man lying in a coma. His wife continually pesters the doctor as to whether or not her husband will live. Eventually, we discover that she is pregnant by a man other than her husband. If he is going to die, she will have the baby, because she wants the baby. However, she also loves her husband, and if he is going to live, she will have an abortion. Does the doctor have the right to determine the fact of the man or the child? Does he have the right to place himself in a position before God?

The book upon which this blog is based mentions only the first of these films—Jeden—as the one to watch. I cannot agree. All of these films are beautifully done, and each is different from the next. Kieslowski, in an effort to make each film its own entity, worked with ten different cinematographers. As a matter of fact, I don’t think Jeden is the best of these films. Each has its merits, and each is worth not just watching, but pondering over. While Jeden may not be my favorite, I don’t think I can pick one I liked the best. Of them all, I think Dziesiec (10) was the most difficult to watch, although that may simply have been from my being so close to the end.

I’ve watched Dekalog over the course of the last several weeks, and I think this is the best way to watch it. The films bring up enough material that watching them straight through would quickly become overwhelming. Dekalog requires time to mull over each film and each of the moral and ethical problems posed. Don’t watch just the first one—you’re only robbing yourself if you do. Watch them all, and take your time with them. Give each one the space and thought it deserves, and you will find yourself amply rewarded.

There neither space nor time to discuss each of these films in depth, although each film is rich enough to deserve such treatment. In the interest of completeness, though, here is the story of each one (numbered as in the Polish) as well as the main commandment it concerns parenthetically:

Jeden (false idols): A young boy lives with his father, who has essentially lost his faith. Instead, the father trusts almost exclusively in his computer. The computer here is a false god, an idol given complete deference by the father, who believes in it completely.

Dwa (no other god): As mentioned above, the wife of a comatose patient is pregnant by another man. Should the doctor claim the power of God and pronounce the man dead, or should he risk the woman having an abortion against his own beliefs?

Trzy (keeping the Sabbath holy): A cab driver wishes to spend Christmas Eve (a holy day) with his family. Instead, he is contacted by a woman he once had an affair with. She claims she cannot locate her husband and begs for help. Should he keep this day sacred, or help someone who needs it?

Cztery (honoring father and mother): A young woman lives with her father, her mother having died days after giving birth. She finds a letter from her mother that tells her that the man she thought was her father is not. The film concerns how she reacts to this news and the relationship with the man who raised her.

Piec (no killing): As discussed above—the murder of a cab driver and the state sponsored execution of his killer. Why does the state have rights that the individual does not?

Szesc (no adultery): A man spies on a promiscuous woman through his apartment window. He is obsessed with her, and manufactures reasons to see her. He finally admits this to her, and she destroys his notions of romance, causing him to attempt suicide. Possibly my favorite of the ten (pictured above).

Siedem (no stealing): A girl is raised by her grandmother, not realizing that her “sister” is actually her mother. The girl’s actual mother kidnaps the girl and attempts to run away with her, stealing the girl in the way she envisions that her mother stole the girl from her.

Osiem (no false witness): An ethics professor is confronted by a translator who knew her in the past. The translator is a Jewish survivor of the Warsaw Ghetto. The professor (of ethics, no less) is the woman who denied the translator asylum after having promised it, claiming that to do so would be to bear false witness, and that it conflicted with her beliefs. Another contender for my favorite.

Dziewiec (no coveting of spouses): A doctor discovers that he is permanently impotent. He suggests to his wife that she take a lover, and then finds himself obsessed and insanely jealous of the situation, in effect coveting his own wife.

Dziesiec (no coveting of goods): Two brothers inherit an incredibly valuable stamp collection from their father, and find that it is far more trouble than it is worth.

The word “masterpiece” is overused, but here it applies. Kieslowski’s series of films is a staggering achievement, and it is relatively unknown in this country only because of its origins as a Polish television series. That’s a shame. More people should watch this. You should be one of them. Yes, you.

Why to watch Dekalog: Intelligent moral questions without preaching.
Why not to watch: Locating it isn’t easy, and people will ask you why you are watching Polish television.
Posted by SJHoneywell at 11:59 PM