I'd Travel to Get Away from the Cast 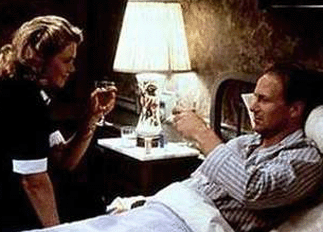 As a parent, there are things I don’t want to experience, even in a movie. I’m not a huge fan of films that put children in danger, or worse, kill them off. The Accidental Tourist starts with a dead kid and goes from there. Macon Leary (William Hurt) and his wife Sarah (Kathleen Turner) have lost a son to a random murder, which we discover about 10 minutes in. We also discover that Macon is emotionally distant, and has not dealt with the death in a way that helps Sarah. In fact, Sarah wants a divorce, which we also discover right away.

Macon writes travel guides focused on the business traveler. Sarah, in fact, seems to think that Macon’s travel guides are an extension of him. His guides specifically instruct travelers on how to be away from home without it feeling like being away from home. His books are loaded with instructions on how to feel at home while away—what to pack and not to pack, where to go in foreign countries to feel like an American in America, and the like.

When Macon heads out for a trip to London for his next guide, he is forced to board his dog, Edward (a little Welsh corgi that looks quite a bit like my mutant corgi mix), because Sarah can’t take him where she is living. He locates a kennel run by Muriel (Geena Davis), who is the sort of wacky movie woman who also happens to be Macon’s complete opposite in almost every way. While he is reserved and dislikes human contact, she is outgoing and bubbly. The only thing they appear to have in common is marital woes—he is going through a separation while Muriel claims to be a divorcee in one of her first ten sentences.

If this is the first movie you have ever seen, you may not know what is going to happen. If, however, you have seen at least one movie in your life, you know for a fact that these two are going to hook up. In fact, when Macon picks up Edward after his trip, Muriel all but humps his leg, offering to both train Edward and to be available just to talk if Macon finds himself lonely. Since Macon seems to survive without human contact, much like lichen or sea urchins, he finds this behavior disturbing, which means that she has to call him, and she does.

After a bizarre accident involving Edward, a basket of laundry and a skateboard, Macon moves back in with his siblings Rose (Amy Wright), Porter (David Ogden Stiers), and Charles (Ed Begley, Jr.), who are all suitably wacky and kooky in the way movie families often are. They do things like alphabetize their groceries in the cabinets and act in ways that make them endearing in a cinematic way, and in ways that no humans actually act. Everyone has crazy relatives, but very few people have charming, goofy relatives that make life wacky and sweet.

Because of his broken leg from his abortive skateboarding expedition, Macon has fallen behind on his latest book, and is visited by Julian (Bill Pullman, when he was evidently 12-years-old), his publisher, who immediately becomes enamored of Rose. This is despite the fact that one of the main reasons Macon’s manuscript is behind is because Rose doesn’t have the right sized envelopes for his chapters, and is just anal retentive enough to be unwilling to send out his work until she buys envelopes that fit his work exactly. As Julian prepares to leave, Edward bites Macon, who naturally decides that it is time to get the dog trained, and naturally turns to Muriel.

What happens next should surprise no one. Macon and Muriel start to find themselves attracted to each other despite their obvious differences. Macon goes back and forth between Muriel and Sarah, who decides she wants Macon back. And that's the movie.

Here’s the thing. I genuinely dislike everyone in this movie with the exception of Macon. All he wants is to be left alone, even if the movie gives him this burning inward desire for a connection with other people. Muriel is annoying and never shuts up. Sarah does nothing but cry and feel sorry for herself. Rose needs therapy.

I find it difficult to enjoy a movie that feels so artificial. Only Macon seems like a real character while the rest are either window dressing or plot points. I don’t like these people and I don’t want to like them.

Some movies stick on the list only for a cup of coffee—an edition or two. The Accidental Tourist is one of those films. Honestly, I don’t think it should have ever been on the list on the first place.

Why to watch The Accidental Tourist: William Hurt, travel tips, and a few good dog training hints.
Why not to watch: These people need to be beaten with sticks.
Posted by SJHoneywell at 11:43 PM