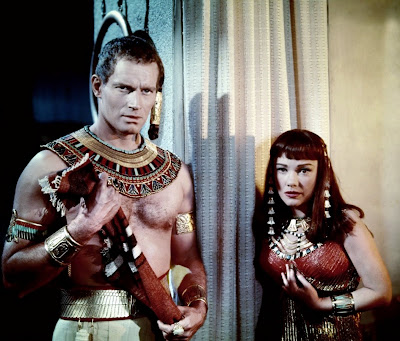 Not all epics are the same. When it comes to epics on film, there are two names that stand out above the rest: David Lean and Cecil B. DeMille. Perhaps no one is more famous when it comes to creating a true epic than the great DeMille, who seemed to film nothing else. Of his epics, none are so well known, acclaimed, or loved as The Ten Commandments.

Of course, the version that everyone knows, and the version spoken of here, is actually the remake. DeMille made an earlier, silent version of this story. While that version was undoubtedly epic, it pales in comparison to the color, talkie version DeMille made in 1956. A good (or great) epic should not only be epic in length, but be sweeping in terms of story. The freeing of the children of Israel from bondage in Egypt fills the second bill, and the close-to-four-hour running time fills the first.

The film is the story of Moses (Charleton Heston), beginning with his birth and the basket in the reeds, and then fast-forwarding to about his 30th birthday or so and his life in the palace as a member of Pharaoh’s household. Here he battles with Rameses (Yul Brynner) to be the next in line for Sethi’s (Cedric Hardwicke) throne. The two also battle for the love of Nefretiri (Anne Baxter), because she is destined to marry the next Pharaoh. Whosoever weds her gains the throne (or vice versa).

Moses is the more successful of the two, successfully conquering Ethiopia and making them allies as well as building a city where Rameses could not, and capturing the love and attention of Nefretiri. However, the palace slave Memnet (Judith Anderson) knows of his Hebraic birth, and threatens to expose him as a slave. In a fit of rage, Nefretiri kills her to protect Moses, but Moses discovers the truth of his birth nonetheless, and demotes himself to the rank of a slave because of the truth of his nature. Eventually, he is exposed to Rameses by Dathan (Edward G. Robinson), the Hebrew slavemaster, and is banished, forcing Nefretiri to marry Rameses.

In his exile, Moses learns of his destiny to lead his people out of Egypt. He returns to Egypt and through him, God brings the plagues against Egypt up to and including the death of the firstborn of Egypt when Rameses finally kicks the Hebrews out of Egypt. Rameses, of course, pursues, and then there’s that whole Red Sea thing and the wandering in the desert until the Hebrews finally walk out of the desert. Really, if you want to know the full story, consult your closest Bible. DeMille takes a few cinematic liberties, but the general story is all there.

Really, the movie is an excuse for tons of extras and spectacle and a few fun special effects like the turning of sticks into snakes. And that’s okay; that’s really what an epic should be.

The film, made as it was in the 1950s, is very Hollywood-y, which means it contains the sort of coincidences that would make Charles Dickens blush. When Moses takes over building the city, he saves the life of an old woman, who naturally turns out to be his real mother. We also see frequent visits by Joshua (John Derek) and his love Lilia (Debra Paget), who is eventually taken into the house of Dathan. It’s Joshua who causes Moses to kill the master builder Baka (Vincent Price). It’s Joshua who brings Moses back to Egypt. It’s Joshua who helps lead the people out of Egypt. It’s almost as if DeMille didn’t mind having tons of extras, but was limited in the number of characters he could actually name.

What strikes me as funniest is that when Moses demotes himself to slave, no one recognizes him. Lilia, who he rescued from terrible punishment, brings him water, but can’t place the guy who was in charge of the slaves for a few months. None of the Egyptians recognize him, either—including Baka, who worked directly under him. Okay, he’s a little (or a lot) dirtier, but it’s not like my kids come inside from playing and I don’t recognize them until they’ve taken a bath. It just seems so silly.

In short, this is not a movie that could be made today, at least not without significant changes. So much of it just seems so goofy that it simply wouldn’t work. The parting of the Red Sea is still pretty cool, even if the effect is fairly obvious to modern eyes, and it appears that the Red Sea is only about 50 feet deep.

Despite all of this, The Ten Commandments is still a great film and still worth watching. It’s undoubtedly easier to stomach for true believers, but even us heathens can enjoy some spectacle in our ordinary lives.

Why to watch The Ten Commandments: An epic the way an epic should be.
Why not to watch: It can’t help but be preachy.
Posted by SJHoneywell at 11:16 PM