The Charge of the Light (Horse) Brigade 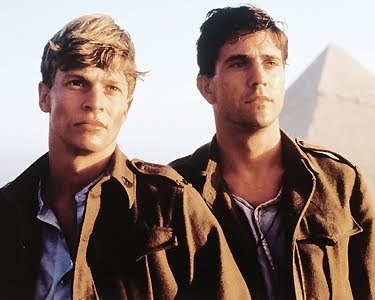 World War I isn’t a big seller in American films. I think there are a few reasons for this. For one, we weren’t in the war that long. The U.S. didn’t enter until 1917, and the war ended in November of 1918. Unlike cinematic war favorites like World War II and the Vietnam War, our troops were there for a cup of coffee before the whole thing ended (and no, I’m not diminishing the sacrifices made. All wars are terrible, and almost all deaths in war are tragic). Essentially, if the war is looked at as a story, we showed up in Chapter 20. From an American perspective, there’s not enough there.

The other reason that World War I shows up rarely in American films is the nature of the war itself. The wars that followed the Great War were mobile affairs, with troop movements, air battles, naval engagements, tanks, pushes against enemy strongholds, and shifting fronts in all theaters. Certainly WWI had the beginnings of aerial combat, the first tanks, and its share of naval battles, but the bulk of the ground war was static. Men sat in trenches and rushed up over the side. The front didn’t move more than a few miles for months at a time. There’s only so much you can do with guys holding machine guns and staring at each other.

This is less true for other countries, who were more involved in the war, and thus we have Gallipoli, an Australian film about the soundest military defeat suffered by the Aussies in the First World War. As in most war films, the scope of the battle at hand or the war in general is far too big for us to concentrate on that. Instead, we focus on a small group of potential soldiers and follow their path as they go from joining up to the battlefield.

First among these is Archy (Mark Lee), who lives on a farm in the west of Australia. Archy is a sprinter, and a good one, trained by his grandfather, Jack (Bill Kerr). In preparation for his first major race, Archy takes a bet and damages his feet badly, but still goes on to compete, against the wishes of his father. It’s evident that Archy wants to join up despite being too young. Jack wants him to concentrate on his running instead.

We also encounter a quartet of youths, also in the western part of Australia. These are Dunne (Mel Gibson), Billy (Robert Grubb), Barney (Tim McKenzie), and Snowy (David Argue). All but Dunne are keen to join up as well—women love a man in uniform, and the Australians are currently in the war fighting against the German ally Turkey. With such glowing press, the three are ready to fight. Dunne, however, is a sprinter like Archy, and has other plans for himself.

Archy and Dunne face off at a race in which Dunne bets on himself and loses, leaving him without a cent to his name. He and Archy attempt to reach Perth when Archy is prevented from joining up. Archy wants to get in, and will fake his identification to do so. Dunne still has no real desire—his goal was to win his bet and open up a bike shop. However, down on prospects and hoping perhaps to impress a few saucy farmer’s daughters the pair meet along the way, Dunne attempts to join the light horse cavalry like Archy. Archy gets in, and Dunne, since he doesn’t know his way around a horse, does not.

Instead, he meets his three mates from back home, who drag him along into the infantry. We get a rush through boot camp, a quick reunion of Archy and Dunne, and a transfer of Dunne to the light horse at this late stage. And then all of them are shipped off to the Gallipoli peninsula to fight for real.

And here’s where the film takes a hard left turn. Up to this point, this film is fun, carefree, silly, even joyous. And then we get to the war, and the proposed landing of British troops on the peninsula. The Australians’ job will be to force the Turks to turn away from the beaches. They’ll do this by shelling the Turkish positions, and then charging the trenches. At this point in the film, we’re most of the way through. We get through the first hour and a half or so without anyone really being in danger of anything more than a venereal disease from an Egyptian prostitute during training. But suddenly, the war gets very, very real.

As the film tells the story, a British commander adamantly sends the Australian forces over the top and into the face of Turkish machine gun fire over and over, despite the fact that the Aussies are being almost completely wiped out on every assault. Most of them don’t get more than a few feet before being cut down, and yet the orders continue to come to essentially commit suicide in the face of the Turkish guns. I don’t know if this is historically accurate or not; frankly it seems far too “movie” to be anything less than an exaggeration at best. However, it is very powerful and moving here.

Eventually, it comes down to a foot race, like the start of the film. Dunne is working as a runner at this point, looking for a way to prevent the troops from being forced over the top to certain death again. As the time comes nearer and nearer for Archy’s turn up and over, Dunne races against time to get word back to halt the attacks. It’s a tense moment.

Is this an anti-war film? I’m not sure. Like many films that are ostensibly anti-war, it appears to me to be much more anti-stupidity. As such, it has a message that has not lost any of its value. If I do have a complaint, it’s the soundtrack. Gallipoli was filmed in 1981, long before Mel Gibson was anything like a true international star (and long before he became so publically anti-Semitic and weird). As a film of that era, it has a very 1981 synthesizer soundtrack that clashes (for me) with the time period of the film. The cheese factor on the music is very, very high.

Why to watch Gallipoli: It’s good to be reminded that stupidity and obstinacy are bad.
Why not to watch: The grating soundtrack.
Posted by SJHoneywell at 10:21 PM