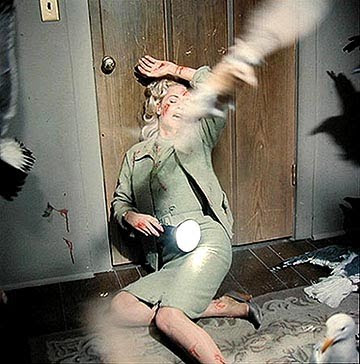 Alfred Hitchcock really made only two films that can be classified as horror. Certainly he had scares a-plenty in a lot of his work, and almost everything he did had a touch of the morbid, but only twice did he really delve into horror. The first time was Psycho, which was part psychological horror film and part thriller. His next film was The Birds, which was straight out scare.

Horror movies tend to be either ridiculously complex or are able to be summed up in a sentence or two. The Birds is the second variety. Essentially, a number of flocks of birds attack a coastal town in California. There is no explanation for this. The birds attack; the birds fly away and come back to attack again.

Our main character here is Melanie Daniels (Tippi Hedren), who is sort of the low-end Paris Hilton of her day. She’s the daughter of a wealthy newspaper publisher in San Francisco, and she raises hell for fun, pulling practical jokes on people because she knows she can get away with it. Our introduction to her, though, is in a pet store that specializes in birds. She’s looking for a myna bird that she has ordered, and we learn that it will be a gift to her strait-laced aunt, after Melanie teaches it a couple of choice phrases, naturally.

While in the store, she is approached by Mitch Brenner (Rod Taylor, who is sort of Robin Williams-y). Looking to play a joke on him, she pretends to be an employee, but it’s quickly obvious that she knows nothing about birds. He calls her on it, and claims to know her, or at least be familiar with her various stunts. Sparks fly between the two. He claims to have wanted a pair of lovebirds, and after he leaves, Melanie orders a pair. She also tracks him down through her connections at her father’s newspaper.

As it turns out, Mitch Brenner spends his weekends in Bodega Bay with his mother (Jessica Tandy) and his much younger sister, Cathy (Veronica Cartwright). It’s his sister he wanted the lovebirds for, so Melanie follows him to the city and discovers where he lives. She also verifies the name of the sister with the town’s school teacher, Annie Hayworth (the wonderful and often underrated Suzanne Pleshette). Anne, it turns out, has a bit of thing for Mitch Brenner.

Melanie plays her joke on Mitch, but as she sails back across the bay, she is attacked by a seagull. And then things start to get interesting. She and Annie find a dead bird on Annie’s front porch, evidently crashing itself into the house, and at Mitch’s place, his mother Lydia complains that her chickens have stopped eating. Suddenly all of the birds in town are acting strangely. The next day, Lydia heads out to talk to a local farmer and finds a gruesome sight—the birds have attacked in the night, broken into his bedroom, and killed him, pecking out his eyes.

The birds next attack the school where Cathy is, then outside a diner where they cause a pretty cool explosion. And then, they attack the Brenner home, attempting to peck their way in against all of the defenses that Mitch has nailed up. Poor Anne gets brutally pecked to death at one point. And again, there is absolutely no explanation for any of this. The birds attack, fly away, and attack again, and no one knows or discovers why.

This lack of a reason, for some films, would be a detriment, but here it works. This is terror that happens just because it does. There aren’t years of abuse in the birds’ childhoods, none of them were neglected by mommy bird. They just start to attack, and because of sheer numbers and surprise, are incredibly effective at causing havoc in Bodega Bay, and as we hear on the radio at the end, in a few other places as well.

What I didn’t realize until this viewing of the film, though, is that The Birds is actually a zombie film. Sure, it came out half a dozen years or so before Romero’s film, but that doesn’t change the fact that these two films have a great deal in common, enough that I can virtually guarantee that Romero watched the last 20 minutes of this film over and over while writing his own. So this is another thing we can thank Hitchcock for—he rewrote the idea of the thriller through the bulk of his career, he helped invent the slasher film with Psycho, and he did the same thing with zombie films here.

Really, the boarding up of the house, the scene of the bird attack, with birds coming through the windows and Mitch fighting them back, then them attempting to come in from another part of the house is almost certainly what Romero studied for his film. He just lengthened the scene dramatically and changed the foes from birds to undead ghouls. This may be one of the reasons I like this film so much: its influence on the horror genre is palpable and obvious.

It’s true that many of the visual effects don’t work as well now as they did 40+ years ago. It’s not that difficult in most places to tell what’s a real bird and what’s not, but that doesn’t change the effectiveness of the scare. The rest is best covered in spoilers.

*** BIRD ATTACK! ***
This is a very dark and troubling film throughout, with no real hope of a positive resolution at the end. Instead, the film simply ends with our characters driving away. We get no sense that this is an isolated incident or that the Brenners and Melanie will get to San Francisco safely, only that they’ve managed to get away for now, and only because the birds let them. One of the better established facts here is that the car they are in is a ragtop convertible, which means if the birds do attempt to go for them, our heroes have little if any protection from beaks and claws.

However, before this scene is the one where Melanie is attacked in the upstairs room. She goes up and looks in to what is almost certainly Cathy’s room and sees that the birds have managed to tear open a part of the wall and ceiling, and have roosted inside. Melanie strangely but believably gets caught in the room with the birds and is attacked, pulled out at the end by Mitch. It’s at this moment that I really fell in love with the film. When Mitch tries to bandage her, Melanie panics and flails, and following this, for the next few minutes at least, her eyes are completely dead. It’s fantastic. She’s completely broken from the woman she was at the start of the film.

Additionally, there’s a nice counterpoint between her and Lydia. In the middle of the film after Lydia finds the farmer with his eyes pecked out, Melanie acts as nurse for her, and in fact goes to rescue Cathy while Lydia complains of not being strong enough to cope without others. At the end, Melanie is driven away from the house with her head on Lydia’s shoulder. Now Lydia is the strong one.
*** THE BIRDS FLY AWAY ***

I love this film. It’s obvious to me that the guys who did Mystery Science Theater 3000 loved this film, too, because they referenced it constantly. They especially liked the diner scene, and referenced the woman screaming at Melanie and the drunk Irish guy saying “It’s the end of the world” frequently. And really, who can blame them?

Why to watch The Birds: Because Hitchcock is freakin’ awesome.
Why not to watch: You’ll never look at a chicken dinner the same way again.
Posted by SJHoneywell at 4:59 PM