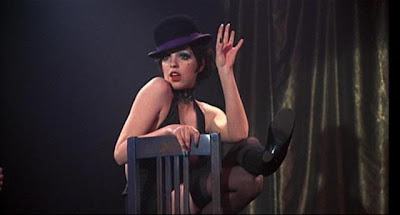 Our story in general centers on Sally Bowles (Liza Minnelli), a performer at The Kit Kat Club in Weimar-era Berlin. It’s a decadent time, in part because of rampant economic depression. Times are difficult for everyone, and to counteract this, places like the sexy, sordid Kit Kat have a booming business as people attempt to hide from their many worries and problems. Sally is a singer in the club, not one of the dancers/strippers, but her act is racy nonetheless.

A great deal of this raciness comes from the emcee (Joel Grey), who invites the patrons (and the audience) to observe the cabaret and enjoy themselves. After a couple of quick musical numbers, we get a much better introduction to our main cast. Sally, we learn, is an American in Berlin. She’d like to be a movie star, and is willing to do anything to get there. If this means she needs to sleep her way to the top, she’s more than willing to do so with anyone who even hints at being able to help her. Morality is slippery in Weimar Berlin, and that seems to suit Sally just fine.

We’re also introduced to Brian Roberts (Michael York), a poor student who has come to Berlin to give lessons in English to make enough money to finish his schooling. He ends up living in the same boarding house as Sally and the odd crew of German citizens, and while he appears to be initially attracted to Sally, he is also wary of her.

One of Brian’s first students is Fritz (Fritz Wepper), a poor gigolo who wants nothing more than to marry into money. Conveniently, another of Brian’s early clients is Natalia Landauer (Marisa Berenson), an heir to a great fortune. That she’s also attractive and young is bonus for Fritz, who immediately begins to woo her.

Meanwhile, Sally and Brian begin a mild (in Sally’s opinion) affair. Things change when she meets Maximilian von Heune (Helmut Griem), a millionaire and a Baron. In short, Maximilian is the man of Sally’s dreams. He’s young, good-looking, and wealthy as all hell. The fact that he’s married isn’t much of an impediment. He has an agreement with his wife that the two of them will stay married but will allow each other to have any sexual escapades they wish. Sally and Brian both spend a great deal of time with him until he eventually ditches them.

At this time, Sally discovers that she is pregnant, and isn’t sure of who the father might be. She considers an abortion, but is convinced out of it by Brian, who intends to marry her. At this point, the real crux of the story shows up, and would require a spoiler—and I don’t really have the wherewithal for it tonight.

I know that this film is based on a play, but I’ve never seen Cabaret staged, so I’m not sure how much of the more lurid and shocking elements in the movie are in the staged drama. We discover right around the time Sally starts considering an abortion that Brian is bisexual, having slept with Maximilian a number of times, just as Sally has. Pretty racy stuff for 1972, although right in the wheelhouse of director Bob Fosse.

At the risk of significantly troubling any Liza Minnelli fans, theater people, or flamboyant gay men in the audience, I really dislike Sally Bowles as a character. She’s annoying. She talks constantly and always about herself and is constantly extreme in her actions and opinions. She needs a good slap across the face to bring her back into a world that isn’t focused directly on her. Brian loses his patience with her at some point, and I almost cheered.

Despite this, and believe me this surprises me entirely, I found this movie extremely watchable. Sally is terribly annoying, and yet she’s also pitiable. She’s so desperate to do anything to get to where she wants to go that she’s immediately degraded. He world and life are so terrible and she is so desperate for that world and that life to be extraordinary that I feel for her despite the fact that I dislike her.

Of course the real show-stopper number is the title song, which comes at the end, and Liza belts it out with real heart. The lyrics here are worth listening to, since they give over the whole story of the film. Also of interest is the role of the emcee. We never see him off the stage, but we do see the progression of Weimar Germany’s descent into national socialism with his act on stage, and eventually the rise of the fascist party, all through what he does on stage.

Surprised that I liked it? I was. It seems to be as real a portrait of Weimar as we can hope to have, or at least as good of one as we’re likely to get with musical numbers. We know from history that Sally is doomed, that much of the world is doomed. It’s likely that Sally knows this deep in her heart as well, but there she is on stage, reaching for that elusive dream anyway. 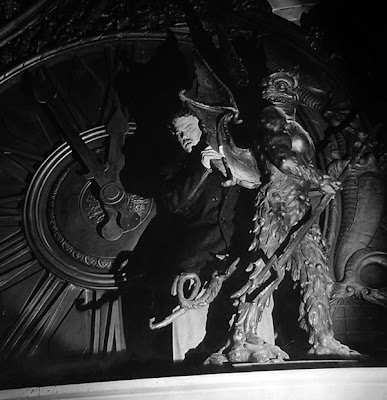 Cabaret deals with the beginnings of the Nazi takeover in Germany; The Stranger, directed by Orson Welles, deals at least in some respects with the aftermath. Here, the premise is that Nazi war criminals have escaped from Germany and made their way in secret to the United States where they keep their secrets as close as they possibly can, fearful of detection. Wilson (Edward G. Robinson) is the early version of a Nazi hunter, pursuing a man named Franz Kindler. Kindler was one of the masterminds of the Holocaust, so the capture of him is of intense interest to the American authorities.

To capture Kindler, the authorities release a man named Konrad Meinike with the hopes that he will head directly to Kindler. They arrange for him to escape confinement and he heads to Connecticut, where Kindler is hiding. Kindler lives in a small town where he has taken the name of Charles Rankin (Orson Welles). Rankin teaches at the local school and speaks English with a perfectly decent American accent. In short, his cover is nearly perfect and he is above suspicion.

That is, until Meinike shows up. Meinike has converted to Christianity, and unknown to Rankin, has stopped by the house of Mary Longstreet (Loretta Young), the daughter of a Supreme Court justice and Rankin’s fiancé. Rankin, realizing that Meinike has been released to help the authorities track him down, kills Meinike and buries the body in the woods.

Wilson, however, is a much more implacable foe than the little German man. He begins to suspect Rankin almost immediately, and works to force him to implicate himself. There’s the body in the woods, of course, and Rankin’s history. Additionally, there’s a comment that Rankin makes about Germany that starts Wilson’s mind working. His problem is that he has no proof, and certainly no admission from the man himself. He recruits Mary’s brother Noah (Richard Long) to help him trap Rankin and force an admission from him. And thus is set in motion a cat-and-mouse game with a number of fascinating twists and turns.

A great deal of the plot centers on a large town clock that is several centuries old. Rankin is fascinated with such things and is working all hours at restoring it, or at least claims this. Much of his time in the clock tower isn’t really spent there at all, but covering his own tracks regarding Meinike and his own past, as well as trying to outwit Wilson. He’s lost none of his cold, calculating nature, which becomes evident about half an hour in when he poisons his wife’s dog to prevent the dog from digging up the body he’s hidden in the woods.

The Stranger is a difficult film to comment on. Of the Welles films I have seen (and I haven’t seen them all by a long shot), it’s the weakest. This isn’t to suggest that the film is not worth watching or that it doesn’t belong on the list, only that I tend to expect a lot more from Orson Welles back when his career was in bloom and he was still more than merely a good filmmaker, but was a great one, and a relevant one.

There’s also nothing specifically disappointing here. The cast is as good as one could find at the time. Edward G. Robinson is stellar in his role, as always, and since he was so easily typecast as a gangster in Little Caesar, it’s great to see him play the role of the good guy here and in other films. Welles himself is dark and brooding, a role he took to pretty naturally, it seems. The film is well-written and directed, and contains any number of memorable speeches. It’s also one of the first post-World War II films to show actual Holocaust footage, even if most of what is shown is actually off-camera.

Is it worth watching? Does it belong on the list? Sure. I think it does. Even a mediocre Welles film from the mid-1940s is as good or better than a great film from most directors. There’s a real intensity to this film that was difficult to find in war pictures of the same era. There’s a feeling throughout not only that Kindler/Rankin is a terrible man who deserves his fate, but a sense of needing to cleanse the world of him. But it’s also realistic. Few people are completely evil or have no positive character traits. Kindler/Rankin, for instance appears to genuinely love Mary and want the best for her. It certainly doesn’t redeem him, but it does humanize him in a way that would be easy to skip, since he’s also a Nazi war criminal who helped conceive of one of the greatest evils in history.

It’s worth a watch, even if Welles made other, better films.

Why to watch Cabaret: A tremendous, gutsy story.
Why not to watch: Sally Bowles is damnably annoying.

Why to watch The Stranger: Film noir at the top of the form.
Why not to watch: Welles made better movies.
Posted by SJHoneywell at 11:39 PM