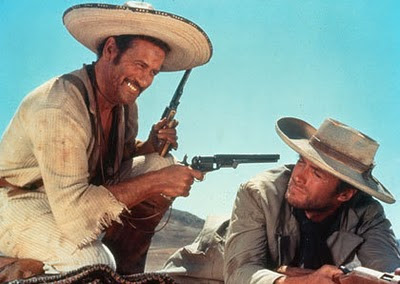 Say the words “spaghetti Western” to someone and I can virtually guarantee that the first film they will think of is Sergio Leone’s classic Il Buono, il Brutto, il Cattivo (The Good, the Bad, and the Ugly). Start talking about great film soundtracks, it won’t be too long before someone howls “Ah-ee-ah-ee-ah, wah-wah-wah” in imitation of the great Ennio Morricone’s soundtrack—one of the greatest ever, and certainly the most memorable soundtrack for a Western ever done.

For such a long movie, the story is incredibly simple. Three men, the eponymous title characters, discover that hidden somewhere in a graveyard is $200,000 in gold coin. Two of them have one piece of the information while the third has the other piece of information. They fight with each other, team up, chase each other, and eventually all end up at the right spot at the same time for a three-way battle over who ends up dead and who ends up rich.

There are dozens of characters in the film, of course, but only three really matter—the three in the title. The Good (Clint Eastwood) is essentially the Man With No Name from Fistful of Dollars and For a Few Dollars More. Here, he still has no name, but everyone calls him Blondie. He’s good only in the sense that he isn’t one of the other two characters. He’s not a complete bastard or completely evil.

The second important character is the Bad (Lee van Cleef), typically called Angel Eyes but also known as Sentenza. He’s a hired killer and supremely nasty, but he does live by a particular moral code. If he’s paid for a job, he finishes the job. He has no compunctions with killing, hurting, maiming, or otherwise messing with people just because he wants to. At the opening, he learns the name of the man who stole the $200,000, kills the man who told him, and then kills the man who hired the hit—because he was paid to do so.

Our third and final character is the Ugly (the vastly underrated Eli Wallach), the only character who has a name we’re sure of: Tuco Benedicto Pacifico Juan Maria Ramirez. Tuco spares himself from being the Bad not because he’s any better. If anything, he has fewer compunctions about killing than Angel Eyes does. He’s also completely ill-mannered, dirty, and brutish.

When our film starts, Blondie and Tuco are pulling a scam on various towns. Tuco has a large price on his head ($2,000 as the film starts). Blondie captures him, drags him into town for the reward, and then shoots the rope on his noose before he can hang. Then, as the bounty goes up, they head to the next town and repeat the scam. When Tuco complains that he deserves more than half because it’s his neck at the end of the rope, Blondie severs the partnership, leaving Tuco with his hands tied in the middle of nowhere.

And so, a large part of the beginning of the film is this rivalry between Blondie and Tuco. Eventually, Tuco catches up and exacts his revenge on Blondie, forcing him to walk across the desert without the benefit of a hat or water. Part way across, though, they run into the man who stole the gold, who is dying. He tells Tuco the name of the cemetery where the gold is hidden, and while Tuco runs to get him water, Blondie crawls up. The dying man gives the name of the grave to him—and now Tuco and Blondie are partners again.

Eventually, they encounter Angel Eyes, who is masquerading as an officer in the Union Army. He beats the name of the cemetery out of Tuco, then teams up with Blondie and a gang of thugs to find the money. But Tuco chases them, reteams up with Blondie, and eventually, the three wind up in the correct place. Before this happens, though, Blondie and Tuco join the Union Army and blow up a bridge.

I was young the first time I watched this film, and I didn’t understand a lot of what Leone was doing. The final showdown, for instance, I thought went on far too long. Watching it now, though, I see Leone’s goal, and this scene is brilliant and I wouldn’t cut a single frame from it. I do think it could be a little shorter, though. The scene where Blondie and Tuco blow the bridge, for instance, isn’t that important. All that happens is Tuco tells Blondie the name of the cemetery and Blondie tells Tuco the name on the grave. It could be cut without much loss.

While this film is a Western in every sense of the word, it may be shocking to many people to realize that it’s not that far west. The film takes place during the American Civil War, and crosses path with the war over and over. It all takes place east of the Mississippi—the cemetery at the end is in Illinois.

Is it the greatest spaghetti Western ever made? If not, it’s second only to Once Upon a Time in the West. 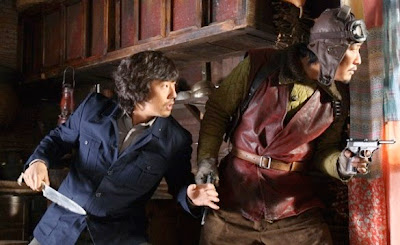 The influence of Leone’s film crosses all boundaries and nationalities, as evidenced by Ji-woon Kim’s Joheunnom Nabbeunnom Isanghannom (The Good, the Bad, the Weird). Unquestionably influenced heavily by Leone’s film, this is a much more modern take in every sense of the word. The themes are a little different, but the plot is very much the same. Three men look for buried treasure while a war (or something like it) happens around their private battle.

The setting is very different, though. Instead of the 1860s in the American Midwest, this story takes place in Manchuria during the 1930s, after the Japanese invasion. The plot centers around an ancient map that allegedly shows the way to a massive treasure buried during the Qing Dynasty.

Initially, the map is sold by the employer of our bad character, Park Chang-yi (Byung-hun Lee). Suave, good-looking, and ruthless, Chang-yi always fulfills his contracts. Once the map is delivered, his job is to steal it back. Rather than take the easy way of boarding the train, he hires a gang and stops the train.

What he doesn’t know is that on the train looking to rob the passengers is Yoon Tae-goo (Kang-ho Song, who I immediately recognized as the blonde main character in Gwoemul). He’s an evidently simple, goofy (the Weird) train robber, but as it turns out, he has quite a significant past, and ties to Chang-yi. He steals the priceless map before Chang-yi and his thugs can get it.

Also on the train is a bounty hunter named Park Do-won (Woo-sung Jung) who is our good character. He’s looking to capture Chang-yi for the bounty, and wouldn’t mind grabbing Tae-goo as well. Chang-yi is the prize, though; Do-won is convinced that he is the Finger Chopper, a notorious criminal from Korea who has come to Manchuria. Each of the three is on the road for the treasure, each wants to get rid of the other two, and a gang of criminals as well as the entire Japanese Army want the map as well. Everyone pursues everyone else, lots of people get killed in interesting ways, and eventually, the only three who make it to the correct place on the map are our title characters who duplicate a version of the three-way shoot out.

This is a wonderfully inventive film despite the fact that it is essentially an homage to Leone’s film. There are a number of other sly jokes and references as well—my favorite being Tae-goo dragged by a Jeep like Indiana Jones. No matter the various films being lovingly referenced here, and no matter the 1930s time frame, this is a tribute to Leone’s great work. The characters, the set-up, the ending—everything is a modernized Korean version of Leone. Even the soundtrack is a modernized version of Morricone’s brilliant work, and the camera work during the three-way fight is a shorter, stylized version of the same scene—close-ups of the eyes and the guns and a spinning camera.

Despite this, as I say, this film is wonderfully inventive. The action sequences are tremendous, like very few other films, or at least like no other films made outside of Korea. There’s bloodletting a-plenty and great stunts throughout. Despite the incredible number of deaths and the callousness with which these are often treated, this film is incredibly fun to watch. I almost want to watch it again immediately.

At the end our heroes duke it out. Unlike Leone’s movie, there are no guns unloaded here. Instead, the trio shoot the hell out of each other, and as they lay dying, a gusher starts up where the treasure was supposed to be. The treasure is oil.

However, after the credits start to roll, we see a wanted poster for Tae-goo, and a figure with a scarf over his face sees it and rides away. The implication is certainly that Tae-goo and Do-won have survived, just like in the original. Do-won is pursuing him because, as it turns out, Tae-goo is the nefarious Finger Chopper who cut off Chang-yi’s left index finger.

The biggest surprise to me isn’t how much I enjoyed this movie. If you’d asked me at the start of the year what I thought of Korean films, I wouldn’t have had much of an opinion. But based on this and a few others, I’m willing to say that Korean cinema is more than up-and-coming. It’s here, and it’s worth watching.

Why to watch Il Buono, il Brutto, il Cattivo: A Western the way it should be done.
Why not to watch: Too long by 20 minutes.

Why to watch Joheunnom Nabbeunnom Isanghannom: A brilliant homage, and a unique film in its own right.
Why not to watch: The ending is pretty cryptic.
Posted by SJHoneywell at 10:09 PM