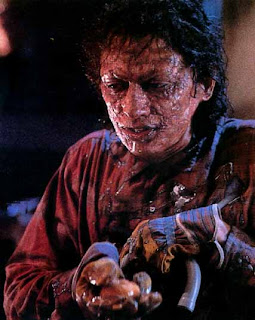 Way back in January, I made the comment that movie remakes suck as a rule, and I stand by that comment. Most of the time, if something is a remake, it’s going to suck. Even if it doesn’t suck, the chances are extremely good that it will not be up to par with the original. Most of the time, something gets lost in the translation. Even a well-made, intelligent remake usually pales in comparison with what came first. The remake of The Manchurian Candidate, for instance, had a great cast and was nicely realized…but the original was better.

There are those celluloid genetic freaks that shine out above their predecessors, though. What everyone thinks of as the definitive version of The Maltese Falcon is actually the third time that story was adapted for the screen, and the second time under that name. It’s possible for a film to improve with a remake. They just usually don’t.

One of those improved films is David Cronenberg’s version of The Fly. A campy B-movie when originally made, the 1986 version is streamlined, aggressive, frightening, and pulls no punches in terms of genuine scare and gross-out effects. It’s also a film right in Cronenberg’s wheelhouse; he has a favorite theme, and this one falls right into that theme’s sweet spot.

We start at a science conference where reporter Veronica (Geena Davis) is interviewing a socially backward, slightly maladjusted scientist named Seth Brundle (Jeff Goldblum). He tells her that what he is working on is going to change the world in a very real way, and that she should come and see it, forgetting about the rest of her appointments. She relents after a little struggle, and he takes her back to his lab.

His invention truly does have the ability to change the world. He’s created teleportation. He can move things from one pod to the other—a distance of 15 feet—with a lot of energy and a computer running the system. The one flaw he has is that he can’t move living material, which he demonstrates to a messy conclusion with a baboon. Desperate to keep his work a secret and give Veronica a reason not to publish yet, Brundle invites her to observe his work and write a book on the discovery. She agrees, and the two quickly become an item.

All of this seems to irritate Veronica’s boss, Stathis Borans (John Getz). He’s the editor of the magazine she writes for, and the two of them used to be an item of the friends-with-benefits variety. Borans is nicely named in the sense that he’s boorish, a lout, and a pig. In the real world, he’d be guilty of multiple counts of sexual harassment, but we’re in movie world now, so we’ll let that slide as simply defining the man’s character.

In the way that science seems to work in films, Brundle has a breakthrough and figures out how to teach the computer to understand the nuances of living tissue. He sends through another baboon, this time successfully, meaning that not only has he put FedEx out of business, he’s also managed to put airlines into the homeless shelter as well. He’s not ready to celebrate until he takes the jump, and he wants to wait to make sure the baboon is okay. However, when he believes that Veronica has gone back to the smarmy arms of Stathis, he gets drunk and teleports himself. Unfortunately for him, when he got into the pod, there was a fly with him—but the fly isn’t there when he gets out.

Brundle immediately starts to change. These changes are good initially. He is filled with energy and life, new strength and agility, and (we discover shortly thereafter) superhuman sexual stamina. The changes continue, though, and he slowly starts to deteriorate physically, a process that we witness in the audience in stages. Everything gets even more complicated when Veronica discovers that she is pregnant with Brundle’s child, and she isn’t sure if she got pregnant before or after he fused with the invading insect.

There’s a lot that works here, even if the premise is a little goofy. The chemistry between real-life (at the time) couple Davis and Goldblum is real, and this plays very much as one of the strengths of the film. They’re a cute couple together here, and entirely believable. Goldblum plays characters that are vaguely off in one direction or another very well, and Seth Brundle is off center in most directions, making this one of his best screen roles. Initially, he is what my wife calls “a-dork-able,” and that’s all well and good. It’s under the pounds of prosthetic makeup in the middle and late parts of the film, though, that his performance really shines. Spastic movements and eye rolling that should play as overacting at the very least instead come off as realistic and true under the circumstances.

Cronenberg, as mentioned above, is completely in his element here. Over and over, his films probe the idea of the betrayal of people by their bodies. Crash (based on the Ballard novel, not the film of the same name that won a metric ton of Oscars a few years ago), Naked Lunch, Dead Ringers, Videodrome, Scanners, and on and on in the man’s catalog, this basic idea pops up again and again, here no less than anywhere else. He took it in a different direction in Videodrome and went a lot further in Naked Lunch, but here, the betrayal of the human body by something terribly other is one of the most central ideas. Brundle tampers with the natural world, and the natural world tampers back, and a lot more efficiently.

Despite the age of the film, the makeup effects still hold up. The complete transformation of Brundle to critter perhaps doesn’t work as well as it once did, but for the entire time that Goldblum is under the makeup, it still looks great. This is one of the better features of the film; each time we return to his lab, he has gone through additional physical transformations, almost teasing us with what he will look like next. The only thing guaranteed is that each time we see him, it’s going to be worse, more extreme, and more horrible.

There are certainly some shock moments here, and the film is not for the faint of heart. Three scenes stand out—the arm wrestling scene, the birth of the Brundle baby, and the battle between Stathis and Brundle at the end (notice how I did that without spoilers?). These take the film from its roots as a B-movie with silly costumes and push it toward that horror title it really wants. While nasty, this isn’t what makes this a horror film, though. What does is the battle between Brundle and his fading humanity.

It helps that we care about the characters, even though most of the people in the film are walk-ons with a couple of screen minutes. We learn to like Seth Brundle; we learn that Veronica is a good person who cares deeply for this strange scientist. Even Stathis gets both penance for his wicked ways and redemption by the end of the film. It ends the right way, with the characters where they should be.

All in all, it’s a film not to be missed. Even if you have a weak stomach for film gross-out, The Fly is worth watching. You’ll just need to do it through your fingers a few times.

Incidentally, it’s worth noting that while I watched this from NetFlix, I do own a copy. My copy is on VHS, though, and I didn’t feel like digging it out, especially when the streaming version was so darn convenient.

Why to watch The Fly: Cronenberg’s major theme knocked out of the stadium, let alone the playing field.
Why not to watch: More entomology than you care to know.
Posted by SJHoneywell at 12:59 AM