How Much is One Man Worth? 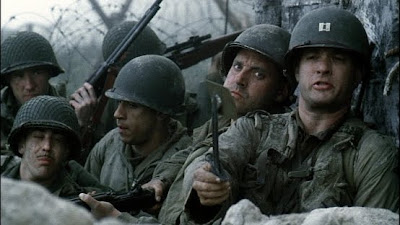 There was a time in cinematic history when war movies followed a particular formula. The bad guys were very, very bad and the good guys were very, very good. In fact, in American war movies of the ‘40s and ‘50s, the Americans were generally heroic, never faltering in their unwavering ability to fulfill their duty against overwhelming and terrible odds. The good guys came out on top, and when they died, they died like men, fulfilling an objective, saving their fellow troops, or perhaps even turning the tide in a battle. In movies about World War II, there’d always be a guy from Brooklyn who wondered how the Dodgers were doing, and the minute a guy showed someone a picture of his girlfriend back home, he’d be killed.

Modern war movies have become far more realistic in that sense. In modern war films, people often die without it advancing the plot in a particular way. People die because they’re in a war, and that’s what happens in a war. People break down, cry, fall apart, and want their mothers. It may not be the sort of Boy’s Own adventure that war had always been depicted as, but it certainly seems much more believable.

This shift started in the late 1970s and early 1980s, I think, when films started to be made about the Vietnam War. Films like The Deerhunter, Full Metal Jacket, and Platoon took the romance out of war films and made them into something terrible to behold. While these films started he trend, perhaps no film displays it more effectively than Saving Private Ryan, a film that in many ways remade the war film.

What people who have seen this film remember most about it is the long, terrible scene of the D-Day invasion. It is a scene impossible to describe in any detail save that it is all horrific. Men dying, limbs blown off, intestines on the ground next to them, carnage, blood. The most striking image is probably the man, his arm blown off at the elbow, picking up his missing hand and walking away with it, but the one that stays with me is of Capt. John Miller (Tom Hanks) picking up his helmet off the beach and pouring blood out of it before putting it back on. A number of combat veterans had flashbacks caused by this opening scene according to reports, and I believe it. It’s that intense and terrible. I’ve seen this film before, and it was this part that I was dreading.

From here we learn that in the D-Day invasion and previously, three young men named Ryan were killed. All three are brothers, and the fourth, Private James F. Ryan (Matt Damon) is at least potentially alive somewhere in France. It is imperative in the minds of the men running the American side of the war that Private Ryan be returned home, his family already having given so much to the cause.

To do this, Capt. Miller is rounded up and sent in search of Private Ryan, who dropped with the 101st Airborne, who were scattered over hill and yon in the French countryside. Going with Miller are his sergeant, Horvath (Tom Sizemore), Medic Irwin Wade (Giovanni Ribisi), and privates Mellish (Adam Goldberg), Jackson (Barry Pepper), Reiben (Edward Burns), and Caparzo (Vin Diesel). Additionally, since both of the translators in his squad were KIA in the invasion, accompanying the group is Cpl. Upham (Jeremy Davies), who has never been in combat, but speaks both French and German.

And this is your movie. After the short introduction of an old gentleman at the Arlington National Cemetery, we flashback to D-Day, and then it’s a manhunt in the French countryside. Of course, since much of this countryside is controlled by the Germans at this point, this is not a happy romp in the park. We learn a bit about the men as they search, and they encounter several pockets of German resistance along the way. At one point, Caparzo is killed attempting to rescue a child, and Wade is killed when the group attacks an enemy machine gun nest.

This is one of the key scenes. Reiben attempts to turn around and leave, since it wasn’t necessary for the squad to take out the machine gun nest, and it cost them their medic. Up to this point, one of the continuing threads is that no one knows much about Capt. Miller. To defuse the situation, he tells everyone where he’s from and what he did in civilian life. It’s also a key scene because it involves the capture of a German combatant, who pleads for his life. The entire squad wants to kill him because of the loss of Wade, adding to the tension in the scene.

Eventually (with a good hour left in the film, actually), the squad finds Ryan as part of a small group of under-manned and under-equipped soldiers holding one of two critical bridges. The Germans are mounting a counteroffensive to take the bridge and halt the Allied advance. Knowing this, Ryan refuses to leave, preferring instead to stay with his comrades who have fought alongside him up to this point. This sets up the counterpoint to the D-Day invasion, as the Germans roll in with several dozen infantry and a set of tanks.

It’s interesting to me to see the number of well-known actors who show up here for just a couple of minutes of screen time. For instance, Dennis Farina is in the film for a couple of minutes as the Lieutenant Colonel who gives Miller his mission. Paul Giamatti is in a couple of scenes as a sergeant in an advanced position (right around where Caparzo gets picked off). The Captain leading that group, Captain Hamill, is played by Ted Danson. Finally, and most amusing to me, is that when the squad finds the wrong Private Ryan (James Frederick Ryan from Minnesota instead of James Francis Ryan from Iowa), it’s Nathan Fillion from Firefly. Additionally, a glider pilot encountered by the squad is played by Leland Orser, who’s a “that guy” from a lot of films (most memorable to me as the guy wrapped in a blanket from the lust murder in Se7en). I like Leland Orser, and I’m a little smug that I can identify him.

Ultimately, the brutality of war is truly depicted here. There are plenty of senseless deaths, and every life is constantly on the line. We see men in combat as they truly are, and while there are heroics here, most of what we see in the combat sequences is men simply trying to stay alive by killing the other guys first. Upham, it turns out, acts like many of us probably would in combat and like none of us would want to—he breaks down completely—something we wouldn’t have seen in a film like this from three or four decades previous. Some of the deaths we witness close-up. Wade’s death is particularly terrible. He realizes where he’s been shot, asks for more morphine, and then asks for his mother before expiring. It’s wrenching, as are a few of the other deaths that happen on screen. These are probably best handled as spoilers.

We do see some deaths up close and personal, like Wade’s, and near the end, like Capt. Miller’s. He actually gets a death scene, grabbing Ryan and telling him to earn what has been done for him with the rest of his life. Other deaths are only implied. Jackson, in a bell tower acting as a sniper, is blown up by one of the German tanks. We see only the explosion, not him dying.

Of all of the deaths, the most terrible is Mellish’s. Fighting hand to hand with a German soldier, the German slowly inches a knife into Mellish’s chest.

The film ends with the return to Arlington, and we probably don’t really need to morph from Matt Damon’s face into the older version of Ryan at the end. We know at this point it’s Ryan. The only other survivors from the squad are the cowardly Upham and Reiben, who tried to leave earlier.

Despite the carnage and brutality here, there is certainly a nod to those earlier, propaganda-filled war pictures of yesteryear. When Ryan determines that he will not return until the bridge is reinforced, it’s Sgt. Horvath who essentially sums up the film, saying, “Someday we might look back on this and decide that saving Private Ryan was the one decent thing we were able to pull out of this whole godawful, shitty mess.” Even in this terrible place, there’s still a sense of honor and nobility. And that’s something special.

Why to watch Saving Private Ryan: The most influential war movie of the last 20 years.
Why not to watch: Carnage, pure and simple. It’s not for the faint-hearted.
Posted by SJHoneywell at 6:20 PM