Times have changed. There was a time in the world when the stated, or at least understood goal of every young man and young woman was marriage. “Do you know a nice girl he can marry” was every mother’s constant refrain for her bachelor sons. For Marty Piletti (Ernest Borgnine), he hears it every day. Every customer he gets in his butcher shop tells him he should be ashamed of himself, what with all of his younger siblings married off and him still living at home with his mother at the too-old-to-be-a-bachelor age of 34. 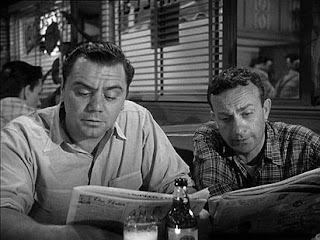 Marty is a sweet guy, perhaps a bit homely (he’s Ernest Borgnine, after all), but a sweet guy. He wants to buy the butcher shop he works at, and he’d like to get married, but he’s decided that whatever women want in a man, it’s something that he doesn’t have. His mother (Esther Minciotti) convinces him to go out to a dance hall despite his reservations, and he goes with his best friend, Angie (Joe Mantell). He’s rejected right away, but this changes when Clara (Betsy Blair) enters with a date who doesn’t much like her, and proves this by ditching her almost immediately. In fact, he offers Marty $5 to take Clara home.

As it turns out, Marty and Clara hit it off. He’s perhaps homelier than most guys, and Clara is plainer than most. But, in true Hollywood style, they’re made for each other. They’re both genuinely nice people. Marty perhaps asks Clara to dance because he feels sorry for her. He’s a sweet guy, and Clara deserves better than her jerk of a date. She deserves Marty.

If that were the whole movie, though, we’d be done after 30 minutes, and there’d never be a reason to watch it. Life for Marty gets complicated immediately after he meets Clara, because it appears that no one else in his life thinks that she’s good enough for him. She’s too plain; she’s not good enough for him. All they see are her faults, which is pretty much what her whole life has been, and what his life has been, too. It’s obvious right away that the two of them are absolutely smitten with each other.

The brilliance of the story is that it’s that old, old story that we all know: “She’s not good enough for my son.” Sure, everyone wants Marty to get married, but nobody really wants him to. His mother doesn’t want to end up on her own like her sister is. Angie doesn’t want to lose his best friend to marriage when he’s still without a girl. It’s very much a case that misery loves company, and Marty is such good company that everyone wants him to stay.

And so, the last third of the movie is Marty trying to justify the fact that he really likes this girl and that she isn’t, as he tells her, so much of a dog as she thinks she is. It’s almost as if the two of them are scared of their own potential happiness, and while the disappointment of being alone is that disappointment, at least it’s something entirely familiar, a known quantity.

I don’t do heartwarming. It’s not really my style of film, or my type of story, but this film is irresistible. I love the fact that the dance hall looks like a junior high dance. The men stand on one side. I love the fact that Marty can’t shut himself up when he talks to Clara, or that Clara can’t help smiling when he does. I love how important it is to both of them that each of them is Catholic.

What can I tell you? This movie is endearing. I can’t help but smile while watching. I like these people and I want them to be happy. Chances are, unless you’re heartless, you will, too.

As an added bonus, this is the only film to every win the Oscar for Best Picture and also win the Palm d’or at Cannes.

Why to watch Marty: Because everyone needs love.
Why not to watch: You’re jaded.
Posted by SJHoneywell at 11:43 PM