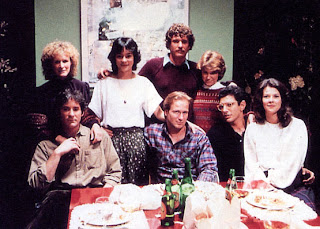 There are movies that define a generation, I suppose. My generation, those who came into their own through the 1980s, are best defined by the Brat Pack films. We early Gen-Exers tend to find a certain comfort in these movies—they spoke to us when we were still trying to figure out who we were. Of all of them, The Breakfast Club is probably the most complete and the best; we’ll get to that one on this list eventually.

The Baby Boomers have their own sets of movies. I’m not a Boomer, so I can’t say which film is the one most attuned to their particular sensibilities, but The Big Chill probably ranks as one of the top three. As a non-Boomer, I have a definite opinion on this movie as it relates to our aging Baby Boomer population. It fits them. In all deference to my Boomer siblings, everything there is for me to dislike about the generation before mine reaches its greatest flowering in the 105 minutes of this film.

In typical movie fashion, all of these people are fabulously successful and wealthy. One is a former radio psychiatrist, one has a popular television show, one writes for People Magazine, and on and on. And of course they all show up with their emotional baggage and hang ups, which are thoroughly expressed over the course of the weekend.

Sarah (Glenn Close) and Harold Cooper (Kevin Kline) own the South Carolina resort where their friend killed himself. He’s trying to get everyone to invest in a deal that will make them all fabulously wealthy, but no one is buying, and she wants him to shut up about it. Sam Weber (Tom Berenger) has a popular Magnum P.I.-esque television show, as well as a busted marriage. Karen Bowens (JoBeth Williams) has a marriage that is failing, and wants to re-hook up with Sam. She’s given up her writing to be a mother to her children. Nick Carlton (William Hurt) is a drug addict who gave up on his psychiatry career because he felt like he couldn’t help anyone. Oh, and he’s now impotent. Michael Gold (Jeff Goldblum) writes for People, and really just wants to start a nightclub. Meg Jones (Mary Kay Place) wants a baby, but can’t find a guy to commit—so she’s looking for someone at the current gathering…except for Michael (and yes, this includes the married guys, with their wives’ approval). And then there’s Chloe, who’s the girlfriend of our stiff, and just as self-absorbed as the rest of them.

And so all of these things come out over the course of the weekend and the principle characters cook big meals, watch football games, and have sex in various configurations. Hey, what the hell, right?

Y’know what? I’m not going to go through all of the permutations of what these people talk about, because this movie is essentially plotless. It’s about the characters in it far more than it is about the events on the film.

And for the sake of brevity (something readers of this blog will note that I am not very good at), I’ll make this quick and dirty. I don’t like these people. They are all self-absorbed assholes. Each one of them spends the entire movie gazing at his or her navel, wondering why he or she isn’t ridiculously happy all of the time and why life is hard. Each one is a special snowflake who should have the world on a damn string, and when things aren’t perfect, they act like little kids told they can’t have a new toy every time they go to the supermarket. These people are jerks; they treat each other like jerks, they talk like jerks, and they act like jerks. They say things that we’re supposed to take as deeply meaningful and important, but these things they say are nothing more than a further expression of their evident belief that the world does and should revolve around their lives.

In short, the constant unspoken refrain of every conversation in this film is a drawn out whine of “What about MY needs?” And with that, the unspoken reality is that each of these people can’t differentiate between what they need and what they want; interestingly, the song played during the funeral scene is the Rolling Stones’ “You Can’t Always Get What You Want.” It’s entirely possible that Kasdan meant this as irony, but having watched the film, I’d need a signed affidavit from him to believe that.

I fully expect to catch grief from people who find this film deep and meaningful.

EDIT: I woke up this morning still mulling aspects of this film over in my head, and something else occurred to me to further fuel my irritation. However, there are some people who may want to (or be forced to) watch this film, and so I'll put this under a spoiler tag.

The culmination of the film comes when Sarah offers her husband to Meg to solve her "I want a baby" problem. I'm certain that this scene was fully intended to be an expression of true friendship and love, but it fills me with nothing but revulsion. Shame on all three of these characters: Sarah for treating her husband like a stud horse, Meg for thinking that having sex with her friend's husband will solve her problems, and Harold for essentially being willing to stud himself out.

This isn't an expression of friendship--this is just another instance of these people reverting back to the "it feels good, so do it" mentality they apparently exhibited in the 1960s. Despite the good deeds they appeared to be filled with in their college days, the only people they really think about is themselves and fulfilling their own desires. And in typical "written by Boomers for Boomers" fashion, most of them get exactly what they want and assume that it was fulfilling a deep-seated need.

Maslow's hierarchy of needs is not a jigsaw puzzle. It fits one way, but you sure as hell wouldn't know it from these narcissistic bastards.

View at your own risk.

Why to watch The Big Chill: Death causes re-evaluation.
Why not to watch: You’re not a self-absorbed chode.
Posted by SJHoneywell at 11:45 PM