Steven Spielberg is a manipulative filmmaker. I don’t deny that he’s also a great filmmaker; I dearly love several of his movies and respect a bunch more. But a part of his success as a filmmaker comes from the fact that he is a master manipulator of the emotions of his audience. Often, this is done behind the scenes and it’s quite effective. The best such toying with feelings is done without the audience knowing its happening. At other times, the strings as it were are visible. 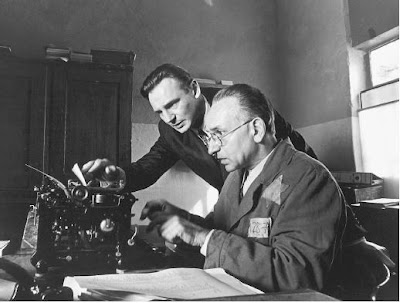 Few Spielberg films are as emotionally controlling as his epic Schindler’s List, a film based on the real story of German industrialist Oskar Schindler. The story itself is a grand one, full of real drama, real pathos, but there are moments that feel as if Spielberg has tweaked them one way or the other to get just the right emotional response from the audience. I don’t want to say that the film feels forced, but it does at times feel moderately artificial, or Hollywood-ized for the benefit of the viewer.

Schindler (Liam Neeson) is an ethnic German industrialist who has shown up in Poland shortly after the German takeover of the country. His intent is to make a huge profit, in no small part because Jews have been banned from owning businesses in the Reich. Thus, he can show up in Poland, nab a formerly-Jewish-owned and still successful business and run it. He manages to acquire a factory that creates enameled metalware and nabs a contract with the German government to make mess kits for the Wehrmacht. In so doing, he employs a huge number of Polish Jews, and essentially has the company run by a man named Itzhak Stern (Ben Kingsley), who essentially uses this as an opportunity to provide jobs for many people in the new Jewish ghetto who need them.

Things change in Krakow with the arrival of Amon Goeth (Ralph Fiennes), since he is to oversee the creation of the Plaszow concentration camp. Goeth is a man who thrives on cruelty and fear, killing any Jew who seems uncooperative, doesn’t work hard or fast enough to suit him, and at times, seemingly simply because he enjoys killing things. Once the camp is complete, he moves all of the ghettoized Jews into it, killing many of them in the process. Many of those killed are factory workers for Schindler. As a stop-gap measure to protect his profits and more and more to protect his people, Schindler bribes Goeth for the creation of a sub-camp. He houses his workers here, where they receive better treatment and are otherwise generally immune from the tortures and random killings of Goeth and his men.

Eventually, the war goes against Germany, and Goeth is ordered to exhume all of the bodies of the thousands of murdered Jews, to completely dismantle his camp, and to ship all of the surviving people to Auschwitz. Again, Schindler intervenes on behalf of his workers, paying a massive bribe to Goeth to redirect those he wishes to Moravia where he will again set up shop, this time creating munitions. This, then, is the list of the film’s title. Schindler spends the fortune he made in Poland to rescue as many people as he can, eventually creating a list of some 1100 people to be directed away from Auschwitz and to him, where he can continue to attempt to keep them safe.

I would be lying if I said the film wasn’t deeply emotional and deeply moving. It is. It would be impossible for a film like this not to be powerful. Spielberg is smart enough to film the bulk of this in black-and-white, which adds a particular starkness to the proceedings. He brings in small flashes of color—the flame of a candle, a girl’s coat—as emphasis here and there. It’s subtle but effective in drawing the eye to a particular place on the screen, and thus to a particular action or the result of an action. A red coat worn by a young girl grabs our attention when we first see it, and does again when we see it in the mass grave during the exhumation of the bodies of the fallen.

This is precisely what I’m talking about when I say that Spielberg is manipulative. There is nothing on screen so moving or so emotional that he will not do everything he can to wring one more tear or one more piece of anger from his audience. Normally, of course, that is precisely the job of a filmmaker attempting to make any film. If we as the audience don’t have an emotional connection to the characters (at best) or the action (at least), there is no reason to watch.

And yet for this film, I wonder if this sort of manipulation is necessary. The truth of the story of Schindler and the people he saved didn’t need any embellishing. It’s already a genuinely compelling story just sticking with the history. Goeth was a truly awful human being who not only ordered the deaths of tens of thousands of human beings, but was evidently personally responsible for as many as 500. Schindler did make a fortune from essentially slave labor and then spend it saving those people from a terrible fate. Nothing here requires that we have anything extra to move us.

Regardless of the fact that I did notice the attempts at manipulation, Schindler’s List is essential for no other reason than it is essential. It is an impossible film to dislike because of what it represents. The most powerful moment comes at the end, when we see a procession of survivors of Schindler’s factory passing and marking his grave with stones. This is not calculating because it is real, and all the more potent because of it. The scene where Schindler leaves his factory to run (Germany has surrendered, and as an official profiteer of slave labor, munitions maker, and member of the Nazi Party, he is a war criminal despite his actions) is also a scene of emotional depth, but feels influenced by a desire for more drama. In fact, it is the difference between these two scenes that indicate precisely why playing the drama card wasn’t needed here. The real story is more than enough; I think it might be impossible to watch that line of people mark the grave with stones as a traditional way of saying thanks without a tear or at least a lump in the throat.

There is a Talmudic quote offered in the film to the effect that a person who saves a life saves the entire world. It's a refreshing piece of philosophy, and one worth maintaining.

Why to watch Schindler’s List: A truly magnificent story of hope and humanity.
Why not to watch: The history didn’t need the embellishment.
Posted by SJHoneywell at 9:51 PM