Play it All Night Long

Film: The Piano
Format: Streaming video from NetFlix on laptop. 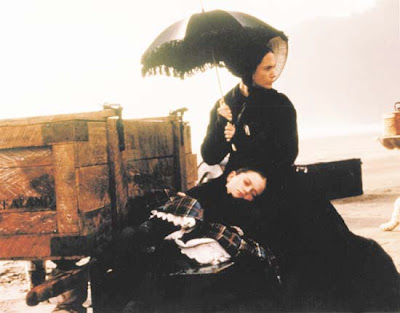 I am not a Holly Hunter fan. There’s something about her that’s akin to biting down on a piece of aluminum foil. Her voice doesn’t bother me a bit in The Incredibles. Maybe there’s something about hearing her and seeing her at the same time. Or maybe The Incredibles is just that good. Regardless, every time I see and hear Holly Hunter, I cringe a little. I’ve gotten through most of her films that will appear here—but the period piece of The Piano loomed large. This was a film for which Hunter won an Academy Award.

Ah, but the good news is that Hunter spends this film mute, lending only a little voiceover narration at the beginning and the end. Holly Hunter should do more films mute—her and Fran Drescher. Wait. Scratch that. Fran Drescher should be serving pancakes somewhere. But Holly Hunter is closer to tolerable when she shuts up.

The Piano, as mentioned, is a period piece. Ada McGrath (Hunter) is a Scotswoman who has been mute since around the age of six. Her muteness is never explained in the film, and there are some indications that it may be entirely voluntary. While never married, she has a daughter named Flora (Anna Paquin), who came from a union with her former piano teacher. Ada’s father marries her off to a man named Alisdair Stewart (Sam Neill), and since Stewart lives in New Zealand, this means that Ada, Flora, and the eponymous piano are headed for a long boat voyage. Thankfully, we are spared this trip, and we see only a glimpse of it before we are deposited with the Scottish duo and the 88 keys on a New Zealand beach.

This union is both cold and completely loveless. Stewart elects to leave her piano on the beach because it’s too heavy to carry back to his house and because he doesn’t have a place for it. Ada protests to no avail. Assisting the carting of the women back to the Stewart estate is George Baines (Harvey Keitel), a Caucasian who has at least gone native enough that he sports some Maori tattoos on the sides of his nose and forehead. Baines is immediately interested in Ada.

This sets up an interesting pair of bargains. First, he trades Stewart a parcel of land for the rights to the piano still on the beach, and gets Stewart to agree to allow Ada to teach him the instrument. He has the piano tuned, then brings Ada to his house and makes her a new offer. If she allows him to do “things he likes” while she plays, she’ll earn the piano back, one piano key at a time. Depending on what strikes his fancy at the moment, she has the ability to earn back multiple keys.

Despite this arrangement, which can be interpreted as a form of sexual slavery or musical prostitution, Ada finds herself falling for the man with the Maori tats, and growing more and more distant from her husband, leading to that good old movie plot chestnut of an illicit affair between two lovers despite marriage intervening. I’ll give it this—it’s an interesting take on this old story. Of course, things get nasty when Stewart manages to uncover the actual arrangement between Baines and his wife.

The Piano is billed as a romance, and a romance it is, although it’s quite an unusual one. It very much seems to be in line with the sort of romance that peeks out around the magazine rack at a typical grocery store, the kind that used to feature Fabio with his shirt open to the navel and a woman with a heaving bossom clinging to him. Intentional or not, it has all of the elements of that sort of book from what I’ve been led to believe—a loveless relationship, a woman desperate for love herself, and a dangerous man, as well as a situation that seems improbable in real life.

There’s also a considerable amount of nudity—male, female, frontal and backal. So, if you ever found yourself wanting to see Harvey Keitel’s meaty loins making thrusting motions, this is the film for you. Ditto if you ever wanted to see Holly Hunter’s naked ass gap. You also get a long, lingering look at Little Harvey; whether or not that’s a good thing is something I’ll leave up to you. At the very least, the film is an equally opportunity nudity display.

Many viewers find The Piano to be a film with strong feminist overtones, but I have trouble seeing that. It’s true that Ada does essentially take charge of her own destiny, both her life and her sexual future, which certainly fits in with that theme. But, for the first hour and change of the film, she essentially prostitutes herself for a musical instrument. In fact, when Baines decides that enough is enough, he tells her that their arrangement is essentially making her into a whore. And it’s he who changes the arrangement, not her. She instead is a slave to the piano, and to some extent to Little Harvey. Feminist? Seems more like the sort of thing feminists rail against.

In a way, it fails for me on the romance angle, too. Baines isn’t so much taken with Ada’s beauty as she is pretty much the only white woman who isn’t a servant, 20 years older, or both within 100 miles. Ada’s eventual desire for Baines is simply choosing him over the only other white guy around. The romance is one of opportunity and convenience, not one of true destiny, so in that respect it pales a bit.

I’m not entirely sure of my reaction to this film. It’s certainly well made and beautifully filmed, but I can’t say that the story is one that thrilled me. Ultimately, if the trappings of the piano, Harvey Keitel’s nose tattoos, and Holly Hunter’s muteness are stripped away, this is the same old romance we’ve seen dozens of times before.

Why to watch The Piano: Holly Hunter spends the film mute.
Why not to watch: Harvey Keitel’s beefy loins.
Posted by SJHoneywell at 11:28 PM